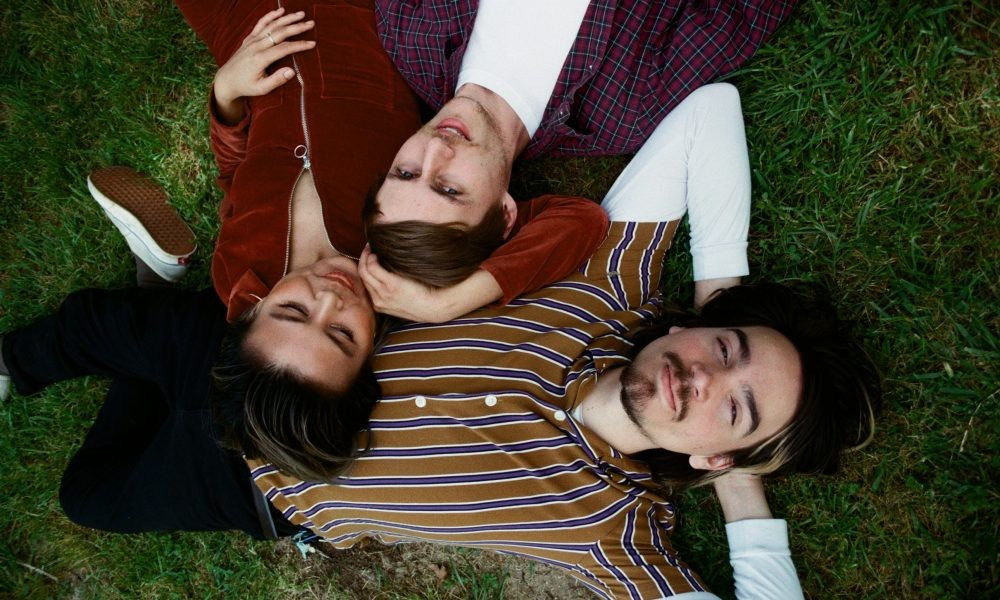 When it comes to a lot of things in life, you’ll often hear people say “less is more.” But when it comes to lo-fi rock, you’ll frequently hear “bigger is better.” For shoegazy Los Angeles garage-rock band Fime, a little bit of both works too: “We wanted to make something bigger than our previous work,” they shared. At the same time, they wanted their new EP to be “less about aggressive distortion and more about a mood and a feeling of expansiveness.”

Comprised of Maxine Garcia, Beto Brakmo, and Chase Cook, Fime is an up-and-coming trio whose debut EP Outside was chock-full of catchy, rollicking melodies, sharp feedback, and honest songwriting. But for their follow-up EP Sprawl, the group has taken their sound to levels both more bombastic and more poignant, rounded out by searing vocals, meditative moods, themes of romanticism, and reverb-drenched soundscapes that ebb and flow and crescendo in spectacular fashion. From the feverish opening anthem “Nogales,” to the buoyant call-and-response euphoria of “Solo / Together,” to the towering catharsis of “Boundless,” Sprawl will leave all fans of lo-fi endlessly beguiled.

Ahead of the release Sprawl, I asked the members of Fime to name FIVE things off the top of their collective head that inspired the record. I stipulated that their answers could be anything big or small: a place, a feeling, a piece of music, a theme, a type of food, some random inside joke, etc. Their responses were: Sonic Youth’s “Bull in the Heather,” downtown Los Angeles, War Kong Wai’s Chungking Express, national identity, and sugar-free Red Bull.

If that doesn’t leave you at least a little bit intrigued, then I can’t help you. Because Sprawl is a lush, introspective, and massive-sounding effort that hits some truly stratospheric sonic heights – an absolute must-listen. And today, Impose is thrilled to be premiering this mesmerizing EP. I also talked with Fime about their experience of making the record, including recording with their roommate Melina Duterte, a.k.a. Jay Som. You can check out that conversation – while getting lost in Sprawl‘s enthralling layers of noise – below.

You three are roommates with Jay Som mastermind Melina Duterte. How did that come to be? And what’s that like living together?

Maxine and Melina were childhood best friends in the Bay Area, but eventually Maxine moved to L.A. when Melina was really starting to find success with Jay Som in the Bay Area. Since she’s moved to L.A. it’s been so nice, we love cooking big dinners and being home-bodies together.

Jay Som is one of the big indie breakthroughs of the last few years. What was it like having Melina in your corner throughout the recording process? And as a producer/roommate, what does she bring to the table?

Melina really is amazing. We had previously recorded ourselves so working with her took a lot of the stress off of us and let us focus on getting better takes and experimenting more. She’s down for anything and tells it like it is. Melina has this Albini-like approach to recording where she is trying to give you exactly what you want without coloring your sound too much. Coming from similar backgrounds, we were on the same page about what we wanted in the recordings, so it was a pretty straightforward process overall. Melina jumped straight to mixing almost before we had finished recording, and after just a few quick rounds of tweaks, we ended up with Sprawl.

Sprawl feels more expansive than your previous EP, Outside. Was there a deliberate move to make it more lush-sounding – with more anthemic choruses and heavier, shoegazey reverb and production?

Yeah definitely! When we first started putting the songs together, we knew we wanted to make something bigger than our previous work. I think we all wanted to write an EP that was less about aggressive distortion and more about a mood and a feeling of expansiveness.

“Boundless” is an incredible song and such a cathartic record closer that ebbs and flows in hypnotic ways. When you were recording the EP, did you feel it was important that it went out with such a bang?

In the process of recording I wouldn’t say we specifically went out with that in mind. Once we heard the initial tracks coming together we all independently came to the same conclusion of what the best order of the EP should be based on the flow of the songs as a whole.

The video for “Solo / Together” was impeccably shot and conceived. What was it about that song that inspired those long, sweeping tracking shots and visuals?

We initially started with the concept of a sparse, industrial video that kind of visualized the sense of isolation that the song has. We took images of the warehouse (Justus Proffit’s Top Space) to our close friend Hailey Ruffner and ran with it. We couldn’t be more grateful for her creativity in helping the video come to reality along with our other talented friends Brandon Kado, Alexa Hegre and Stephan Le.

Overall, what do you hope listeners take from Sprawl?

The creation of Sprawl was a really important process for the three of us. We thought carefully about what we wanted, were purposeful and intentional in the studio and took our time to make the songs we wanted.

Overall, the theme of the EP might be desperately trying to find moments of meaning, understanding, and intimacy in a sprawled, urban setting, and hopefully that fleeting feeling comes through when you are listening.

Recording sessions can go really long. What was to the go-to take-out food order while you guys were in the studio?

Honestly, we did Chipotle a few times. Something for everyone. Also, if you’re in the area, a current hometown favorite is Joy in Highland Park. You can’t go wrong with the thousand layer pancake.

This show will run late.

What cities do you love performing in the most? And do you have any plans to tour soon?

San Francisco is a favorite because it’s so close to home for us. We may have plans for 2020 in the works, so stay tuned!

What advice do you have for other L.A.-area musicians who are grinding and cutting their teeth in the scene?

The most important thing is just showing up. If someone you know is playing a show you need to come and support. It’s not only your friends’ bands you need to come see but musicians you admire and respect. If the show was free then you should buy a shirt or cassette. Playing in a band is a community effort.