“Lift your head up, you're Egyptian!” 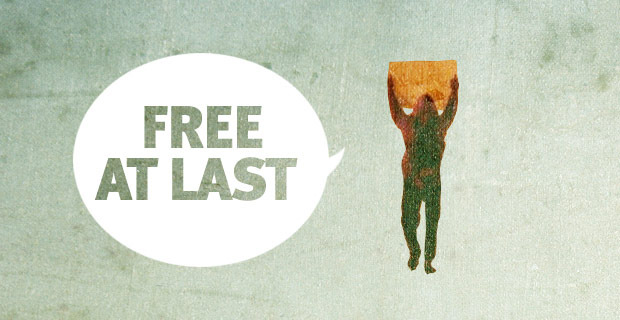 Democracy Now! producer Sharif Kouddous, who has been tweeting from the bowels of the Egypitan uprising ever since it gained ground, tweets now as celebration takes over Tahrir Square:

“Lift your head up, you're Egyptian!” – the chant of victory in #Tahrir #Egypt

Our mentor Zizek has rushed his reaction to the Guardian, pointing out the universality of the Egyptian struggle for democracy:

The uprising was universal: it was immediately possible for all of us around the world to identify with it, to recognise what it was about, without any need for cultural analysis of the features of Egyptian society. In contrast to Iran's Khomeini revolution (where leftists had to smuggle their message into the predominantly Islamist frame), here the frame is clearly that of a universal secular call for freedom and justice, so that the Muslim Brotherhood had to adopt the language of secular demands.

When an authoritarian regime approaches the final crisis, its
dissolution tends to follow two steps. Before its actual collapse, a
rupture takes place: all of a sudden people know that the game is over,
they are simply no longer afraid. It is not only that the regime loses
its legitimacy; its exercise of power itself is perceived as an impotent
panic reaction. We all know the classic scene from cartoons: the cat
reaches a precipice but goes on walking, ignoring the fact that there is
no ground under its feet; it starts to fall only when it looks down and
notices the abyss. When it loses its authority, the regime is like a
cat above the precipice: in order to fall, it only has to be reminded to
look down …

The West warns cautiously that the transition must take place in a lawful way, but there is something to be said about that call's “cruelest irony”:

…as if Egypt had the rule of law until now. Are we already forgetting that, for many long years, Egypt was in a permanent state of emergency?
Mubarak suspended the rule of law, keeping the entire country in a
state of political immobility, stifling genuine political life.

Zizek's frenemy Tariq Ali has also rushed to the Guardian, and he'd like you to read this poem by legendary Arab poet Nizar Qabbani:

The age of political reason is returning to the Arab world. The people
are fed up of being colonised and bullied. Meanwhile, the political
temperature is rising in Jordan, Algeria and Yemen.