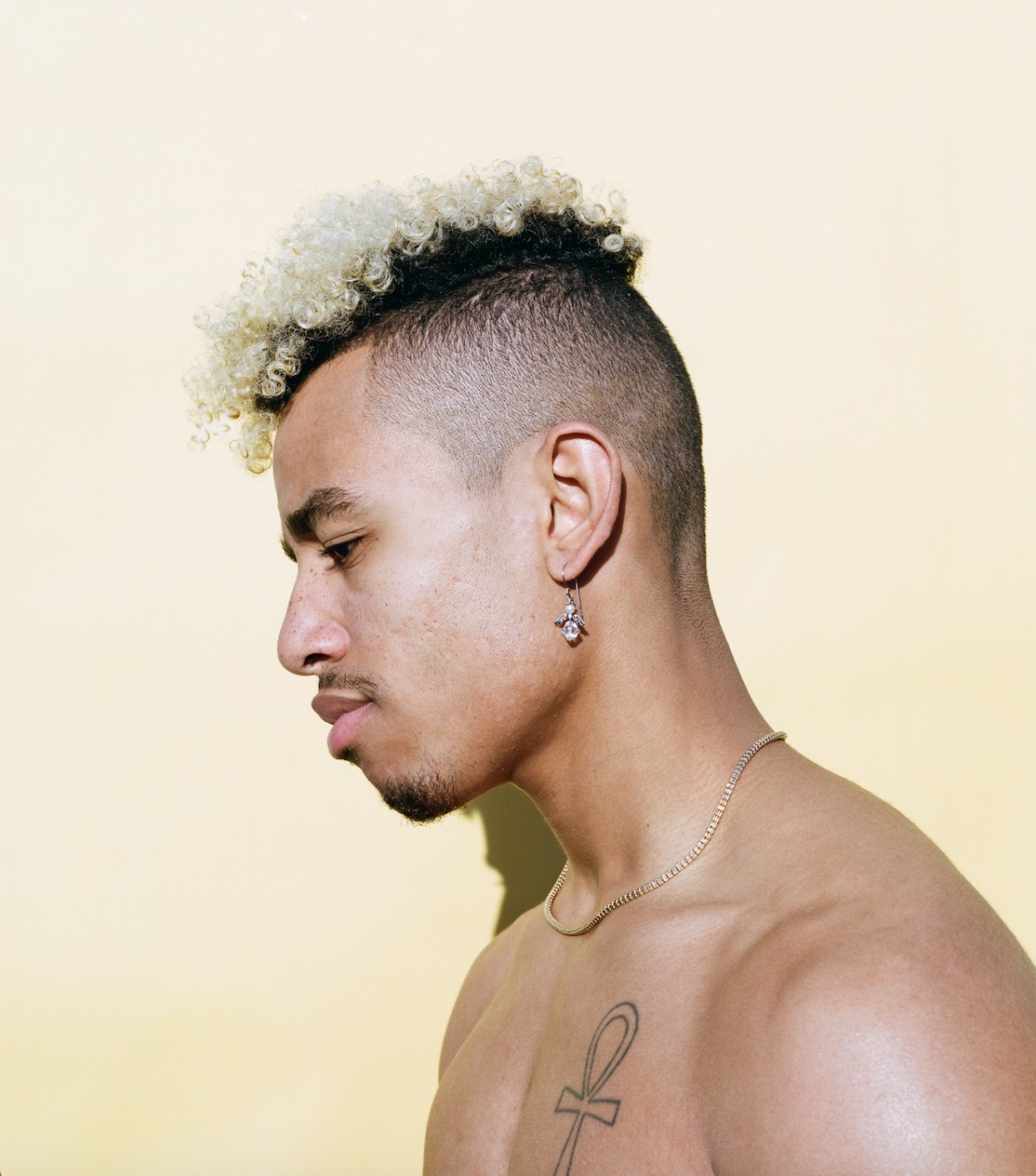 Leven Kali may be influenced by soul legends of the past, but one listen through his recent project makes it clear that, whatever level of funk he possesses, it wasn’t learned. It’s in his blood.

Specifically, he was born—with it—on tour in Amsterdam and spent his childhood watching his father, bassist for funk-rock band Mother’s Finest, perform around the world. Now, he considers himself an “earth citizen” after a childhood of traveling. His latest project, Low Tide, is a reminder for him to stay grounded on this planet and fully understand it before eventually venturing off into “outer space.”

The project is sprinkled with reprises, features from R&B heavyweights, and musical effects that feel produced by a seasoned vet. But Kali is only introducing himself.

We caught up with the singer after a few international tour dates last week—and in the middle of a dinner run—to discuss everything from advice from Quincy Jones, the real meaning behind track “Cassandra,” and his ever-growing musical partnership with soul singer Snoh Aalegra.

I know Quincy Jones gave you words of advice a couple years back. Did Quincy’s words ever come to your mind during the creative process of this record?

What have you discovered as you practice more?

Just new ways to communicate through my music. I definitely spent more time working on playing keys. For me, that was the best way to learn more about theory and different things that I can add to my music, whether it be different harmonic choices and whatever. Just the more you practice and sharpen your tools— the better off your music will be.

Of course, and listening to this thing, from start to finish, it really takes the listener and makes them question if the same guy is actually dishing out all these tracks. A few of them are so drastically different, but they’re still connected in a way. “My Pen” screams TLC, while the vocal melodies in “1 On 1” feel like something out of Drake’s So Far Gone. What were you specifically listening to when you put Low Tide together?

I listen to so much different music. I recently just put a Spotify playlist up. And the range of tracks from every genre and every era. I feel like we’re all just kind of vessels for our inspiration, and I have a bunch of different inspirations so they come out in all these different ways.

Who are some of your biggest?

I love Junie Morrison, the Ohio Players, Parliament Funkadelic, Chicago, and more recent influences. I love listening to Drake and Ty Dolla $ign. I like a lot of people but those came to mind.

On “My Offer” you let the sax play through most of it before you come in with vocals at the end. Did you see this as something different you added to this record?

That was just how we made it. I was working with my friend, Diego Huaman, who was my main engineer throughout the process of Low Tide, and he’s very talented. He plays the saxophone and guitar. We were just jamming that night, and we came up with that idea, and it was just kind of natural. We really had no road map or plan for that song, it was really just a vibe.

There’s a lot of parallels on the album, too. What came first, “Sumwrong” or “Nunwrong?”

And what led to you creating “Nunwrong?”

“Nunwrong.” We got a house on the hills after I signed my deal. For like six months, we got to just record in the hills. I had a guitar player come through, Nicholas Veinoglou, an incredible guitar player. We were just jamming. I was playing bass, and he was playing guitar, and we came up with that main groove of “Nunwrong.” And the words just kind of hit me: “I believe in love, I needed love.” And then it just kind of felt fitting to throw in that little motif from “Sumwrong” in there. I always loved in musical theatre, where you have a melody or line that kind of works its way back into the story, like a reprise.

What’s the story behind “Cassandra” and “ardnassaC?”

I was working on “Cassandra” one day, and I was so hungry. And I just had a groove at that point, I ordered Postmates and the Postmate’s name was Cassandra. And it just inspired me to write that hook. Obviously, when you’re hungry and need that food right now. It’s a funny parallel how hunger and horniness go to the same part of your brain, I guess.

And then “ardnassaC,” why did you flip the script for that?

I always liked the guitar chords from the pre-hook of “Cassandra” and played it without the rest of the music behind it. I was hearing it half time, and I’m always inspired to do those part one/part two joints. Like how Timbaland and Justin Timberlake did that on 20/20 Experience, and how Luther Vandross used to have a long-ass string intro and halfway through it would become a pop record. I love that type of shit.

IMPOSE: When you listen to the record and you hit “Do U Wrong,” the chemistry between you and Syd couldn’t be clearer. When did you decide to kick it in the studio with her?

It was like a blind date actually. We got linked up through a mutual friend Zack Sekoff … We just got together and it was an instant vibe, instant chemistry. We wrote the song pretty fast and spent a couple sessions after that recutting vocals at her house. We became friends in the process and had a blast shooting the video. And yeah, I love Syd. She’s one of the coolest, most talented people.

I was looking at your fashion and your on-stage attire. A lot of really unique stuff, obviously the gloves with the cut-off fingers and these mesh shirts you’re rocking. Where do you draw your inspiration to go full force with these stage outfits?

Just kind of how I feel inside. I grew up watching my dad play in a funk band and they always dress crazy. And I just feel comfortable with that on stage.

Did you ever watch your dad practice growing up?

Yeah, I was actually born on tour. I was born in Amsterdam when he had a show out there. My mom would sing with the band, and she was pregnant with me at that point. She had me on the road.

What was the name of the group? And what did your dad play?

Would you ever watch them perform?

Kali: Yes, yes, yes. My childhood, I would travel the world with them when I could. My summer vacation, I would go to wherever they were going on the tour bus, go to rehearsal, and all that.

Do you think seeing so much of the world at a young age translates into your work?

Definitely, I feel like an earth citizen, you know?

You first caught my attention when you toured with Snoh Aalegra earlier this year. I know you lent your vocals to “I Want You Around” and a bit on “FEELS,” but do you see this as a permanent musical partnership?

Yeah. I mean, it started way before that actually. We wrote that song “Time” together. That was kind of a big song for both of us because it ended up on Drake’s project. And then we just kind of clicked. Similar with Syd, but even more so because Snoh and I worked together so often. So yeah, that’s like my sister at this point.

Are her vocals hiding anywhere on your stuff?

Yeah, she’s on “Thursday.” And we have a bunch of stuff together that’s going to come out soon, whenever it comes out. I love Snoh. I love working with her.

What do you think your biggest takeaway from sharing this record will be? And what do you hope you gave listeners with this one?

I see it as an introduction to me. I don’t call it an album. I call it more of a project. It’s where my musical journey has taken me over these last couple years. It’s been a fast-moving couple of years. There’s a lot of learning and growth on that project. Learning about myself, that’s kind of what the whole thing has been about really. The journey within. Exploring love. I just want people to see it as a hello statement.

And what do the words ‘low tide’ mean to you?

Kali: As humans in general, everybody is so enamored in outer space and metaphorically reaching the stars on a success level. Everybody wants to reach out and connect with people, make friends, and get followers and all this stuff. We don’t really take the time to fully understand ourselves. And ‘low tide’ is the same way we don’t really understand the ocean on Earth. We don’t even understand our own oceans inside. It’s kind of like a chance to check yourself out, see how you feel. How do you feel about love? Who’s around you? And how does that make me feel? How does that affect how you feel about yourself? We have High Tide coming next. We all have our high tides and our low tides. Not like low is bad, there’s low chakras and all that stuff. And then we have High Tide coming, and then we’re gonna go to space after that.