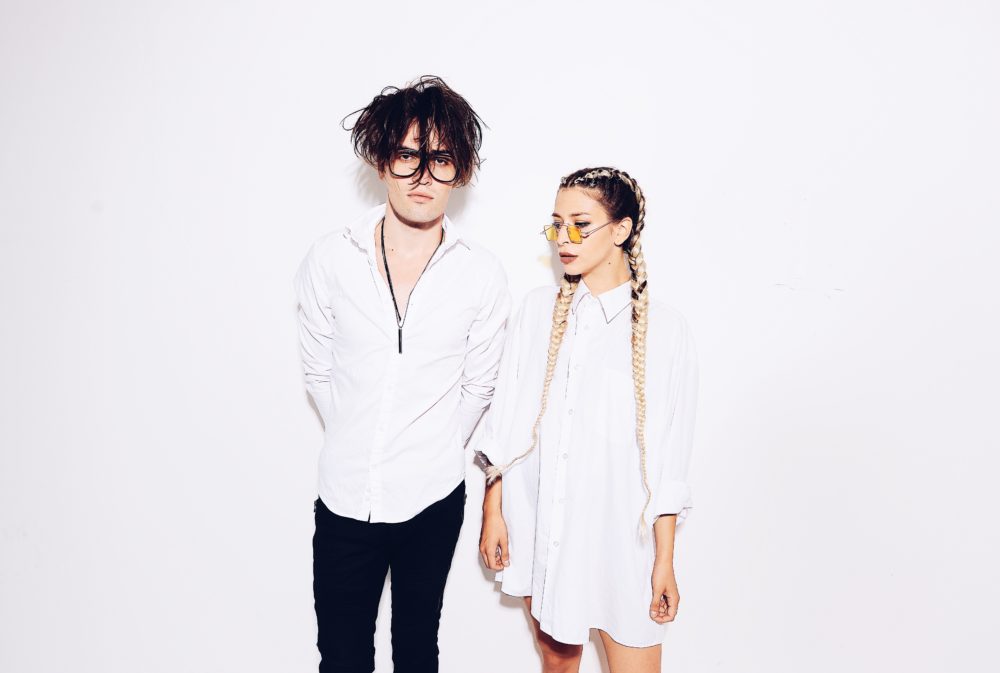 We have a real treat today for all you modern-blues rockin’ fiends out there. Blending influences from all over the map, primarily Slovakia and the US, The Youniverse’s sound is as all encompassing as their moniker suggests.

Comprised of lead singer Tammy and guitarist Jergus, the duo is readying to release CMYK, an album spiritually broken down into the four parts of the printing process and fusing different approaches into a cohesive whole. Today, Impose Magazine is happy to be bringing you the exclusive premiere of single “STICKY TAR.”

On the track, The Youniverse bring an arena ready rock-meets-electro sound calling to mind powerhouse forbears like The Kills or Sleigh Bells.

“We really reconciled our Slovak and American influences on this album,” Jergus shares. “Nationalism is a step back, it doesn’t belong in music… we want to be able to connect cultures, not divide them. After all, we are all a part of the Youniverse.”

To celebrate the release of “STICKY TAR,” we sent the band some interview questions to get to know them better. Listen to The Youniverse’s “STICKY TAR” below and look for CMYK out November 30th via BRUUDER Records here.

Hi The Youniverse! Congrats on your new album. Can you tell us a little more on who you are and how you first got into making music?

Hi! Thanks so much! We’re just two bold, drunk & hopeful people, who are determined and just the right amount of insane to try to break thru. We got into making music like most others—but unlike most others we’ll stay there instead of settling down, giving up, and getting an office job.

Tammy takes a three-hour bath and dresses up for work. Then we have some coffee, about 5-7 shots of tequila, probably some drugs. Then we start working. Whatever gets laid down during a session must be 80% finished by the end of it. It’s a nine-to-five job, really. Just 9pm-5am. Sometimes chairs can fly. Then we play chess to take the edge off.

What are some of the larger themes at play on CMYK?

Lyrically, the songs are about Tammy’s frustration with the system (politics), the status quo of women (society), relationships, and our hedonistic lifestyle.
Musically we have attempted to create a fusion of all the sounds we think are cool, from the blues electric guitar, through dark synths all the way to our local folklore Eastern-European melodies. We really tried to give the listener a varied musical experience that still feels put-together and like it came from one artist.

Who are some of your biggest influences/favorite artists?

Prince, Jack White, Kanye, Betty Davis, Jeff Beck, Muddy Waters, The Weeknd, K. Flay, Two Feet…
We both have slightly distinct tastes but they start with the delta blues artists and go all the way up to Kendrick. Can’t say who was a major influence, they probably influenced us all.
In terms of live acts the best thing we have seen in a long time is St. Vincent and the greatest live performer of all time was Prince.

Any new artists/venues/purveyors of the arts you could turn our readers onto?

We listen to a lot of “new” music to look for inspiration, mostly in the hip-hop or r’n’b genre, but it’s also interesting to see what’s happening in alternative rock or pop-rock. From those I’d point out Bishop Briggs & K.Flay, from the others Anderson Paak, Solange, Syd, PARTYNEXTDOOR, a pretty old artist called Swamp Dogg, who was the original d-o-double-g… his latest album is absolute fire.

Where can we follow you and where can our readers catch you live next?

Currently we are touring just in and around our country, but we are opening for a fantastic Dutch/New Zealand band called MY BABY in December in our hometown, Bratislava.

And since we live in a digital age, you can follow us on facebook and on our instagram @theyouniverseofficial where you can also find our personal profiles and have a bit of a “behind-the-scenes” look at our lives.