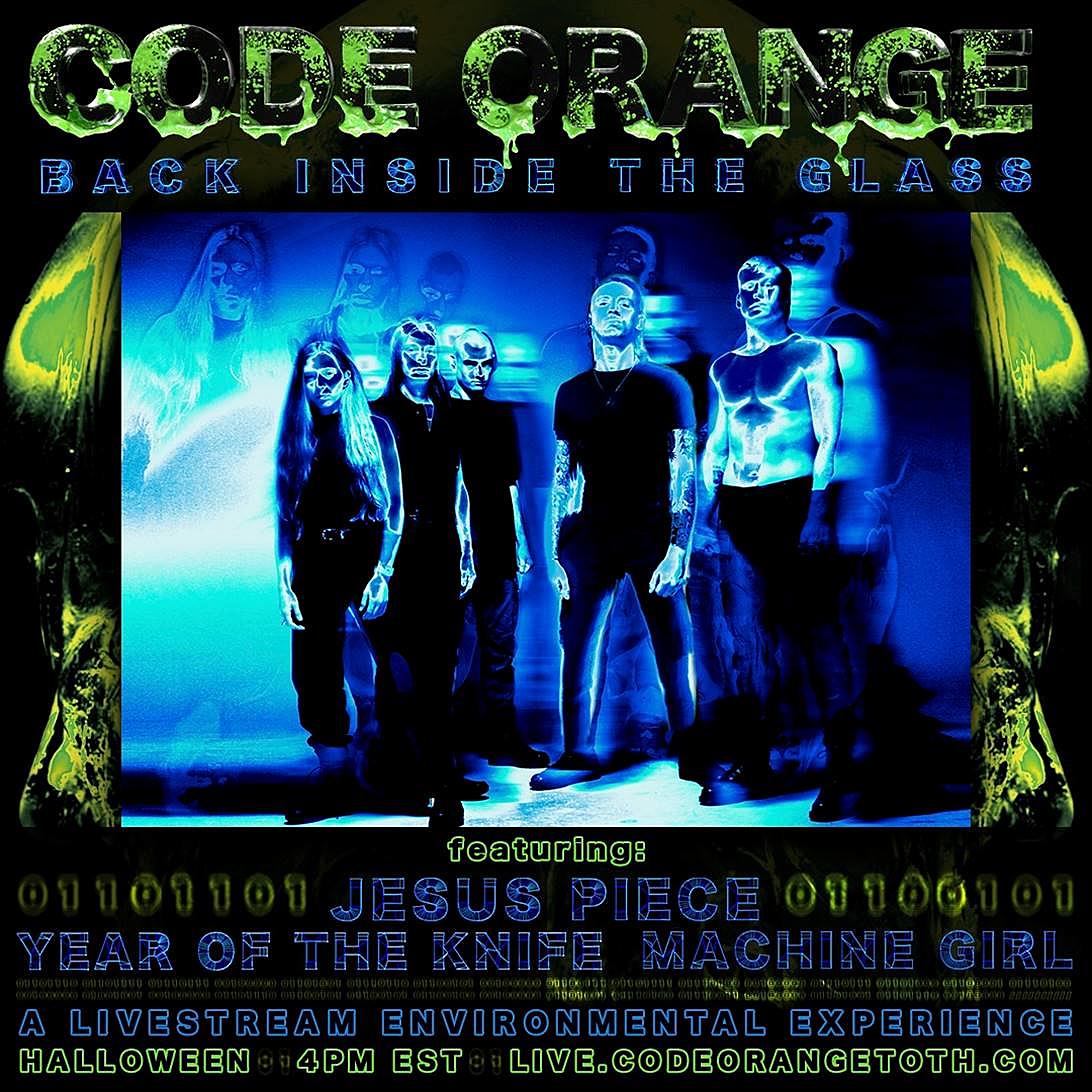 Halloween is one of those holidays that’s gonna feel especially dimmed by the restrictions of COVID. The true spirit of Halloween is meant to be shared amongst big groups of friends – raging in public, decked out in costume, and choking on candy. It’s hard to imagine what a Halloween all alone at home will be like (except the candy part, of course). And yet, here we are.

So we might as well make the most of it, and to be honest, being all alone in a dark house is a pretty spooky way to spend Halloween after all. Of course, a scary movie marathon would be the classic go-to move. But if you’re craving something musical and adrenaline-fueled, we’ve got you covered too. With concerts still on hiatus, bands and artists are making the most of a Saturday Halloween with some exclusive live virtual content. So get ready to do the Monster Mash from the comfort of your living room. Here’s our picks.

Code Orange: BACK INSIDE THE GLASS

Pittsburgh metalcore stars Code Orange have been one of the best “live” bands of the COVID era. With two unique virtual concert specials already under their belt, the band is now returning for another round. At 1 PM PT they’ll debut their spellbinding new live music experience BACK INSIDE THE GLASS, with supporting acts Jesus Piece, Year Of The Knife (performing new LP Internal Incarceration) and Machine Girl. It’ll kick off with an MTV-style “Mudbangers Ball” hosted by former Headbangers Ball host Riki Rachtman. Tix are on sale HERE.

Pabllo Vittar loves a good club night. Beginning early on Saturday, the Brazilian drag icon will host an 18-hour livestream on Twitch that will feature performances from Christine & The Queens, Romy, Kelly Lee Owens, Alice Glass, Purity Ring, Ela Minus & more. If you’re looking to dance your ass off, then this show is just what the Mad Doctor ordered. You can stream it for free HERE.

The L.A. beat scene legend and purveyor Flying Lotus is exactly the sort of artist that thrives on a Halloween concert bill. Meanwhile, Mixcloud has been producing a terrific streaming series called Tickets, and on Saturday FlyLo and a few Brainfeeder special guests will bring the glitchy, ominous IDM vibes to the proceedings. Expect something truly witchy and psychedelic. The show starts at 5 PM PT, you can get tickets and watch HERE.

Chicago band Ratboys are one of the biggest indie/DIY success stories of the last decade, and they’ve continued to pay the buzz forward during COVID with plenty of livestream content. They’ll headline and host a 25-hour Halloween telethon with performances from dozens of their musical friends, including The Beths, Adult Mom, Chris Farren, Illuminati Hotties, Ellis, Oceanator, Diet Cig, Bartees Strange, World’s Greatest Dad, and many more. The show’s proceeds go to The Equal Justice Initiative and Girls Rock! Chicago. You can stream it HERE on Twitch starting at 10 AM PT.

Baby’s All Right Presents The House of Nod Halloween Special

NYC venue Baby’s All Right is going all-out with their Halloween celebration by hosting a one-night only variety show – featuring live music, comedy, Tarot readings, cooking segments. The festivities are all Halloween-themed of course, and performers include Japanese Breakfast, Gabby’s World, The Glow & more. The “Chills, Thrills” and an “iconic Halloween house band” all start up at 6 PM PT on Baby TV. Tix are available HERE.

Los Angeles psychedelic rockers Death Valley Girls released their wondrous and cosmic new album Under the Spell Of Joy earlier this month – just in time for Halloween season. The witchy, occult-tinged band is a perfect fit to deliver the trippy and spooky sonic vibes, and they’ll do so with a virtual show via Noonchorus starting at 6 PM PT. They’ll also be doing a signed vinyl giveaway. Go HERE to watch and purchase tickets.