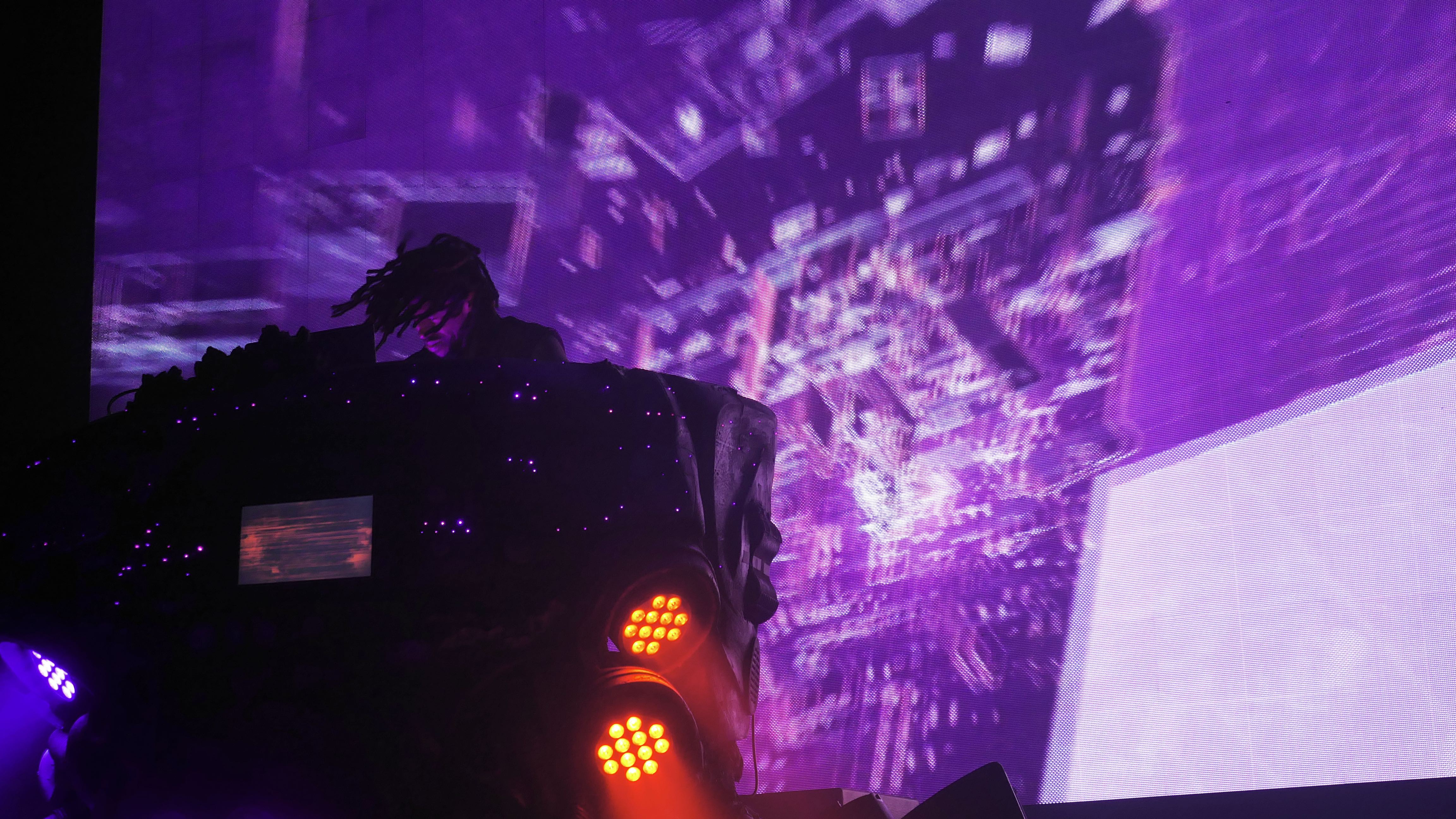 As far as homecoming shows go, I’m not sure Flying Lotus could have had a more appropriate celebration. The electronic-prog master wrapped up his 3D Flamagra Tour this past Friday at the Novo in L.A. following a 45-date tour across the U.S with fellow Brainfeeder cohorts Brandon Coleman, Salami Rose Joe Louis, and PBDY. A quick impromptu comedy set with Hannibal Buress hyped the audience up as he shared that this would be the third show he’s caught on FlyLo’s tour.

Anybody who has been to a Flying Lotus show in the past decade has witnessed his show’s evolution, both musically and in terms of performance. His shows have become more and more immersive as his catalogue has deepened. From a visual standpoint, the 3D show reached new heights hinted at in the past. By weaving visuals, videos, and animation from his past works alongside the new visuals provided by trusted collaborator Strangeloop, Flying Lotus showcased the entirety of his artistry and the depth of his work throughout his career.

And the 3D aspect of it worked to shocking degrees. Typically, I’m not a person who seeks out a 3D experience, whether that be in a theatre or at a show. And while I did wear the 3D glasses the last time I saw FlyLo, this new show seemed to fully embed the audience within the worlds he presented to us. Maybe the fidelity caught up in the last couple of years, maybe it was the environment.

Musically, he is his own genre. Lotus’ influence on the L.A. beat scene is and has been undeniable, but to limit his reach and style to Los Angeles alone is a disservice to the worlds he builds in his music. Hearing songs dating back to the earliest releases in his catalogue alongside newer material from Flamagra is staggering. He has worked with countless legends in their own right. He has so many memorable songs and collaborations that he no longer needs to play some of the earliest staples in his career. To define his style would require too many hyphens. To explain his work to someone who hasn’t heard it would require too much time. It’s best just to play the music.

He set the tone of the night with his David Lynch collaboration and video “Fire is Coming” and rolled through with material from Flamagra and You’re Dead. And while most of the set featured songs from those most recent releases, he still cycled through classics “Zodiac Shit,” “Getting There,” and material from his Captain Murphy alter-ego project, while also making time for much appreciated memorials to Ras G and Mac Miller.

“LA always got the rhythm,” he chuckeled when cutting the music, impressed at the audience staying on beat. After closing the set with the Kendrick Lamar-featuring “Never Catch Me,” which arguably has become his biggest and most celebrated collaboration to date, FlyLo returned with Coleman – who performed a mean synth bass over Flamagra highlight “Takashi” – as well as partner in crime Thundercat, with the three of them rolling through “Them Changes” from 2017’s Drunk, and finally Cosmogramma highlight “Do The Astral Plane.”

All in all, it’s hard to imagine a more fitting sendoff for an artist whose reach and legacy grows with each release. And if his 3D visual performance continues to grow and adapt and evolve in the way it has in the past ten years, we’re all in for a treat the next time he takes the Brainfeeder crew across the U.S.