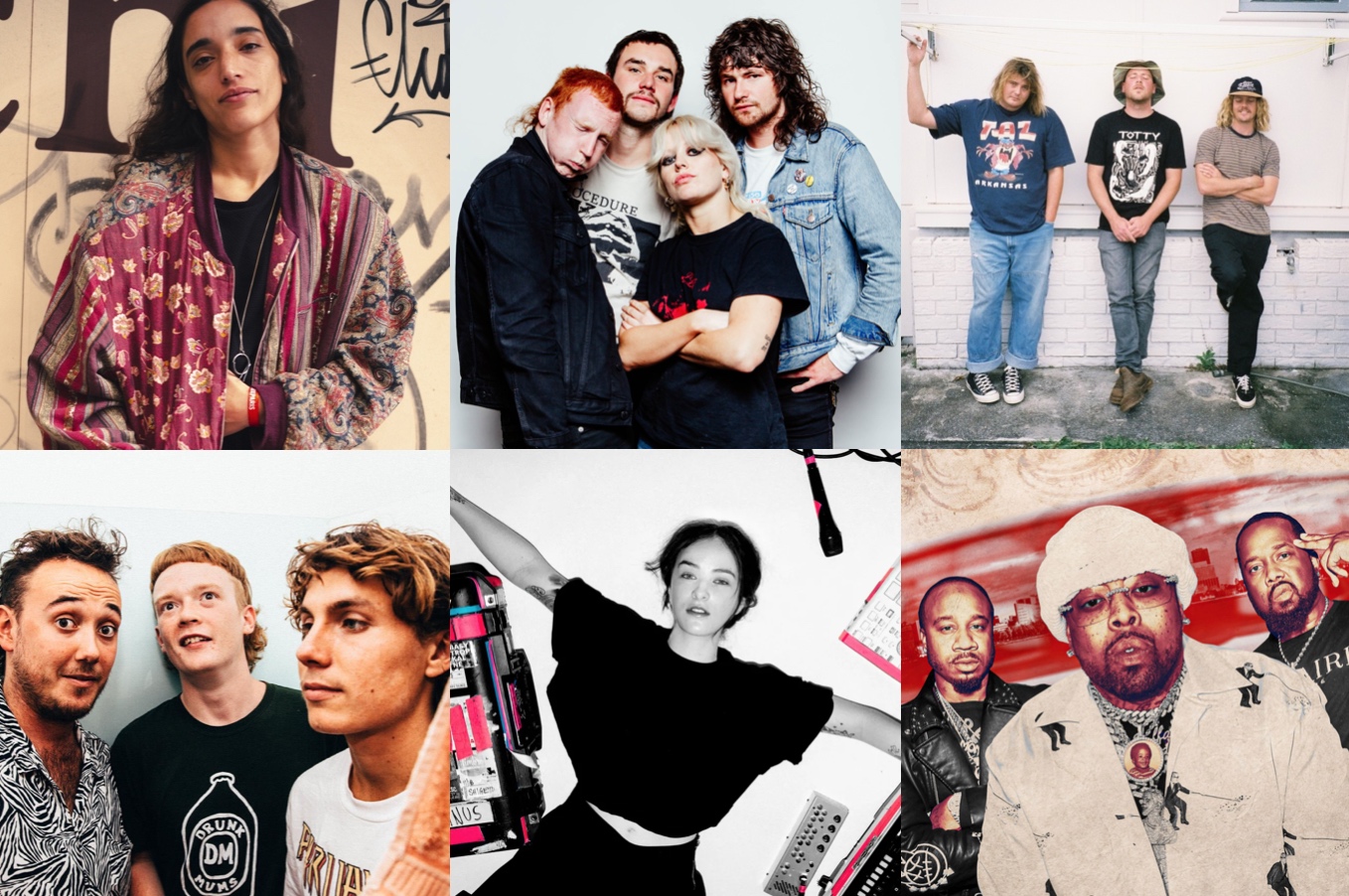 Though mainstream-skewing, the Coachella lineup has plenty of DIY and indie-leaning artists to love on those bottom three lines

The reveal of the Coachella lineup earlier this month marked the official start of festival season. On first glance at the poster, the first thing that stood out was the sheer number of big-name, mainstream-skewing acts. This is nothing new – Coachella has been on a steady evolution since their grungier indie-leaning years. But with Harry Styles, Billie Eilish and Kanye West headlining, and other chart-topping acts like Doja Cat, Megan Thee Stallion and Lil Baby filling those top lines, it’s hard not to feel a bit nostalgic for the days when the indie, DIY or underground acts had more visibility at the festival.

But after digesting this lineup over the past week or so, it’s clear that this contingent is actually still there in full force; they’re just all sitting much lower and in much smaller font. And as a DIY music publication, acts like these are our bread and butter; we couldn’t be more excited for these bands and for the lucky attendees who get to discover them! Sure, I do love a lot of those bigger-name artists, but right now we’re going to champion the underground/DIY/up-and-coming heroes who are more likely to be seen in a clunky hole-in-the-wall venue than on the Empire Polo Fields. And there is a LOT to love from this crop of acts from the bottom three lines. Below, we take you through some of our favorites from each day.

The moniker really says it all. Veteran German DJ-producer renowned for his buoyant, pool party-ready disco house jams. Will make for a wonderful afternoon party in the Yuma. For Fans Of: David Penn, Claptone, Camelphat

Based in Brooklyn and originally from Pakistan, a critically acclaimed singer-songwriter blending jazz fusion and Middle Eastern folk influences. Her 2021 LP Vulture Prince was one of our top albums of the year. Her voice is unreal. Can’t miss set, even if it winds up being at 1 p.m. in the Gobi. For Fans Of: Cassandra Jenkins, Xenia Rubinos, William Tyler

Amyl and the Sniffers

Hard-partying, mullet-rocking garage-punk marauders from Melbourne, Australia, led by the ferocious frontwoman Amy Taylor. Ready to light up the moshpits in the Sonora Tent via heavy riffage and throttling rhythms. For Fans Of: Chubby and the Gang, The Chats, Thee Oh Sees

Another band of mullet-sporting Australian degenerates who somehow shit out perfectly minimal and sardonic garage punk anthems, including the iconic DIY viral hit “Smoko.” A raucous live act, would make for a perfect Sonora b2b with Amyl. For Fans Of: Shame, Amyl and the Sniffers, Minutemen

Hypnotizing Tijuana-born singer-songwriter whose sound is one big futuristic elixir of hip-hop, R&B, indie rock, electronic and psych pop. With that transfixing voice of his, whichever mode he gives you, you’ll be lulled into a trance. For Fans Of: Brockhampton, Paris Texas, Junior Varsity

Heady, bombastic metalcore overlords from Pittsburgh, and one of the most important bands in metal these days. A bit absurd that they’re billed this low, even if they aren’t Coachella’s usual cup of tea, but will deliver an insanely intense, technical, and cathartic spectacle nonetheless. For Fans Of: Knocked Loose, Power Trip, Gulch

Canadian house producer and DJ (and recent Grammy nominee!) known for mixing dashes of soul, R&B, disco, funk and blues into her sets and recordings. Will be the perfect artist to get the Friday Yuma party started. For Fans Of: Honey Dijon, Octo Octa, Channel Tres

Another example of a band billed criminally low on this lineup, black midi’s rabid avant-prog/experimental post-punk antics translate into an absolute powder keg in a live setting. Heroes of the indie blogosphere, they’re without a doubt one of the best live bands at this festival. DO NOT MISS THEM. For Fans Of: Squid, Black Country New Road, Primus

English indie rock singer-songwriter/musician combining elements of soul, R&B, jazz and trip hop into her sound. With an endlessly expressive voice, prepare for a breezy and confessional affair to take hold at whichever stage she sets foot on. For Fans Of: Yves Tumor, Tirzah, Jay Som

Rollicking, garage-y lo-fi beach punk band from San Diego with injections of Chicano rock music and occasional Spanish-sung lyrics. Birthed from SD’s micro DIY scene, it makes me endlessly proud to see this once-tiny band from my hometown make it to the Coachella stage. For Fans Of: Wavves, Los Blenders, Bass Drum of Death

Critically acclaimed Philadelphia indie punk trio that’s captivated the indie music scene over the last half decade, with three excellent LPs and two EPs released to date. Reverb-drenched power chords and stinging moods will get the Sonora crowd amped and rowdy. For Fans Of: Hop Along, Great Grandpa, Cherry Glazerr

A producer and DJ carrying the torch for Palestine’s underground dance scene. Sama’ is beloved for her eclectic techno sounds and for parties that have recently put her in the government’s crosshairs (she was recently released from detention after being made a scapegoat by her government in the wake of a party she performed at). She’ll definitely bring that boundary-pushing energy to the Yuma on Saturday. For Fans Of: Dixon, Amelie Lens, Dubfire

Her website bio says it all: “DJ Holographic is a one-woman funk machine born and raised on Detroit Music. Her mission is to serve a mix of musical cuisine that contains consuming house beats, passionate R&B, and unreserved nu-disco. Join her as she concocts her next rhythmic dish.” Oh trust me, we’ll be there. For Fans Of: Carl Craig, Eris Drew, Moodymann

A verbose and acerbic band from Leeds offering the latest heady twist to the Brexit post-punk revival. Their music is jittery, nervy and socially biting, as evidenced from their recently released debut LP The Overload. Early afternoon Sonora Tent magic right here. For Fans Of: Squid, The Fall, Shopping

Surf rock duo from Reno with three albums of crunchy, hazy sounds under their belt. Their 2013 single “Freaks” randomly became a TikTok hit this past year. They’ll probably be one of the Sonora Tent closers, expect a swooning crowd-surfing party to commence. For Fans Of: Slow Hollows, Beach Goons, Current Joys

The hard-hitting bareknuckle brawlers of New York gangsta rap (Buffalo, to be precise) and the heads of Griselda Records: Westside Gunn, Conway the Machine, and Benny The Butcher. Rap groups are a fun live spectacle, and these guys have a notoriously ominous vibe. Cold, calculated and captivating, they are…*whispers* Griselda. For Fans Of: Boldy James, The Alchemist, Children of the Corn

The next and best in a long line of Houston rappers, Maxo Kream is a mixtape legend turned LP storyteller, releasing two of the best rap albums of the last few years. He delivers rattling beats and gritty street rap verses with silky flows, making him one of the better live performers in the rap game. For Fans Of: Freddie Gibbs, UGK, ASAP Mob

Experimental house and hip hop DJ and producer from Compton, CA, Channel Tres has earned a huge fanbase in recent years for his groovy recordings and DJ sets. One of the more versatile producers on this Coachella lineup, expect a Yuma set that guides us through a vast sonic spectrum. For Fans Of: Peggy Gou, Yaeji, Against All Logic

Fast-rising Boston-based indie rock band with a healthy dose of hazy ’60s psychedelic swagger and fuzzy dream pop textures. The perfect band to smoke up and zone out to on a sunny Easter Sunday. For Fans Of: The Marías, SALES, Her’s

Sure they’re from Sweden, but this band of crusty post-punk musicians look like they’ve been BBQing, ATVing and shotgunning beers all day in rural New Mexico. The look sure does complement their eye-popping mix of scuzzy guitars, skronky horns, throttling drums, and…SPORTS! For Fans Of: X-Ray Spex, Amyl and the Sniffers, Tropical Fuck Storm

A slithery, jam-minded psychedelic band from Amsterdam rooted in the styles of Anatolian rock music. Turkish folk textures including warped synths and groovy drums conjure an aura that is equal parts chilled-out and brain-melting. Afternoon Sundaze vibes for sure. For Fans Of: Kikagaku Moyo, Mdou Moctar, Acid Arab

Another band leading the Australian garage punk wave, Skegss bring a distinctly surfy, crunchy vibe accentuated by shout-along choruses and mosh-ready riffs. They’ve captivated Australia’s youth-driven DIY scene similar to how FIDLAR has in America, and the’re ready to replicate that at Coachella. For Fans Of: FIDLAR, PUP, together Pangea