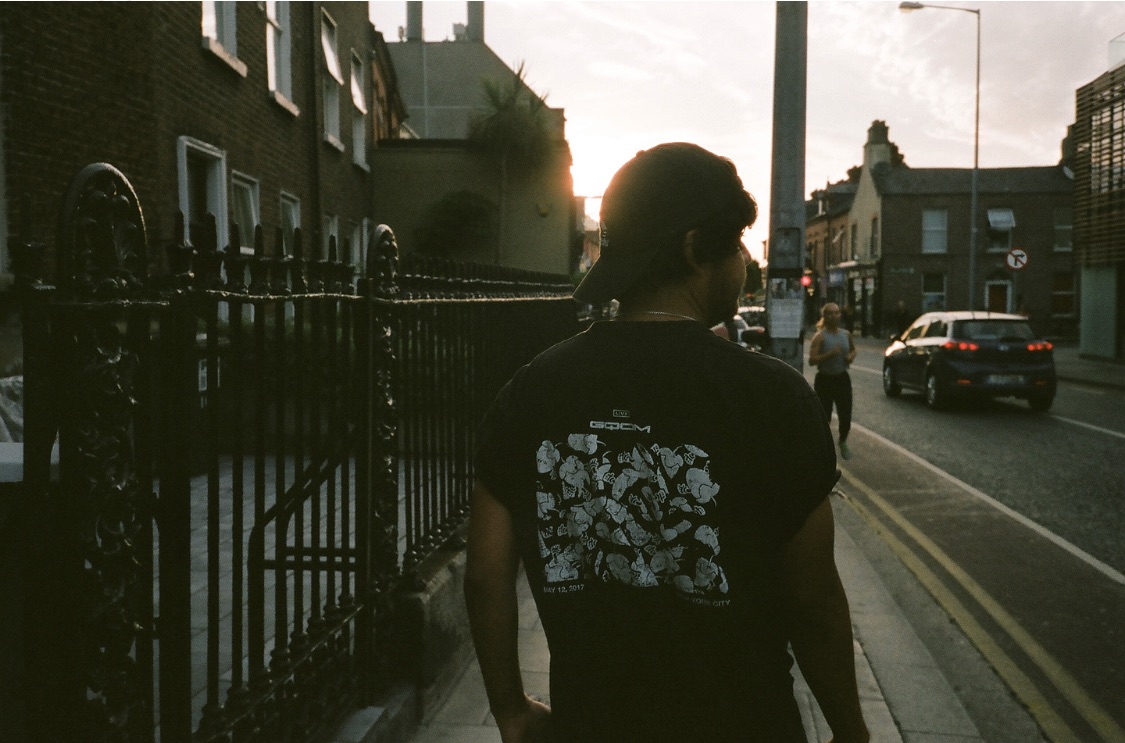 As much as musical experimentation is about coloring outside the lines, it’s also about working with what you know. For New York-based Kam Tambini, the music recorded under his Tambino moniker is informed by the sounds of where he’s lived.

From his early childhood in Colombia and Peru, to his teenage years in Washington D.C., to his career in NYC and as a member of the band Glass Gang, Tambino has been a sonic sponge – influenced and motivated by regional textures at every step of his musical journey.

With the release of his self-titled debut solo EP last week, he’s conjured a truly lush and forward-thinking elixir of soundscapes. Opening track and lead single “Blonde Undone” covers an expansive palette. Shimmering synths and reverb-soaked guitars swirl around Tambino’s hypnotic voice, but the track’s most unique elements lie in its funky, groovy dance kick. Those cumbia-inflected rhythms – topped off with half-Spanish-sung lyrics – melt into atmospheric dream-pop and shoegaze melodies with chameleonic ease. Meanwhile, he delivers an extra dose of melancholy with the noodling guitar riffs on driving song “Shadow,” whose hypnotic hip-hop beats seague effortessly into the short-and-sweet heart-on-your-sleeve ballad “/Feeling.”

The record’s one-two final punch of “5am Spirit” and “El Amanecer” brings it to its cathartic conclusion, a thematic yin-yang whose melodic pieces operate and juxtapose in symbiotic fashion. The former is downbeat and confessional: “It always feels like another night/ I can’t be without/ I can’t be without (somebody here)/ I can’t be without (I’ll disappear…” he croons over sparse, mesmerizing synth and guitar notes. But then, “El Amanecer” continues with the same chord progression and adds a distorted drum machine beat behind it, blowing it all open in emphatically searing ways. Finally, his repetition of the word “antipático” (“unfriendly”) intersperses with the hopeful English plea: “will you stay?” until the record fades off into an echoey, ethereal abyss.

Overall, it’s a gorgeous blending of styles, a stinging emotional ride, and one of the best records of the year. Along with a dash of punk fervor, at its heart, the EP is a both an ode to and a product of the musical landscape of New York City – in all its raw, beautiful glory.

“[The EP] is a love letter to New York but it’s also in some ways saying ‘New York is killing me,’ to use Gil Scott-Heron’s words,” he says.

Tambino is currently riding out the COVID storm in his family’s native Bogotá, Colombia. But he was able to catch up with us and reflect on his musical roots and his richly diverse Tambino EP (which you can purchase HERE). You can read his thoughts and stream that record below.

Having grown up in Peru & Colombia, how much of your childhood was spent listening to cumbia? And what impact did it have on your musical journey?

Cumbia was one of the genres that got played a lot by my mom and family, although not exclusively. What stuck with me the most, almost in a subconscious way, is the rhythm – that binary pá, pá. I think that’s what made me return and rediscover records from 1960s/70s Peruvian cumbia groups like Los Mirlos and Los Hijos del Sol. Then Los Belkings (surf rock), and Los Saicos (proto-punk) who all influenced my guitar playing and songwriting.

When did you discover shoegaze and dream-pop? Who were some artists in those genres that swayed you early on?

I started with My Bloody Valentine in high school. I remember hearing Isn’t Anything on the school bus for the first time on the way to a field trip and being kind of confused at first then blown away. I’ve always had a hard time defining dream-pop but groups like Beach House and Mazzy Star have been an influence in their way of writing approachable songs that have an experimental edge.

Your music under the Tambino moniker seamlessly blends elements of all these styles. What led you to experiment with combining these genres, or “cumbiagaze”?

The sound of the project is influenced by the places I’ve lived throughout my life and the music I’ve picked up from them – Peruvian and Colombian rhythms, punk from Washington, D.C. and hip-hop & experimental music from NYC, among others. The experimentation of blending genres came out of wanting to branch out of just playing “guitar music,” which I love, but has felt a bit stale to me for some time now. The idea was to see if we could take those droney distorted guitars I love and make them work over Latin rhythms or hip-hop beats.

As a member of Glass Gang and as a solo musician, New York has been your home for while now. How has the city inspired you as an artist and specifically with this record?

New York City is a constant inspiration. This EP is of and for the city. Apart from the sonic influences – hip-hop beats, Sonic Youth and countless more – it’s also an ode to its global DNA and mix of cultures. The EP also loosely plays as a recollection of a night in NYC. From missing someone (“Blonde Undone”)  to letting yourself fall into the depth of the night (“Shadow / Feeling”), then coming up for air at 5AM (“Spirit”) and going into the next morning (“El Amanecer”).

What do you want listeners to take away from your debut EP?

I hope people can sit with this EP and listen to it in full all the way through. The five songs all bleed into each other and flow from start-to-finish. The chorus to “Blonde Undone” kicks off “Shadow,” the second track. “Shadow” and “/ Feeling” were originally one song which I cut in half. And “5AM Spirit” and “El Amanecer” are two different approaches to the same chord progression and were, at first, one long song as well. So it’s all one big, roughly 15- minute, piece.

You also spent part of your childhood living in D.C. Growing up, were you inspired by the city’s punk scene?

Yes definitely. Dischord Records were hugely influential for me during my teenage years. My friends and I would all listen to Fugazi, Rites of Spring, and Minor Threat and would often see Ian Mackaye at these free summer concerts held in Fort Reno. I went to countless Q And Not U shows during high school and was at their final concerts at The Black Cat. Same goes for Black Eyes who were my favorite band for a long time. Both of them played explosive punk sets that tied in a lot of experimentation, which was really formative for me.

Lately there’s been an explosion of Latin sounds and Spanish-sung music in the American mainstream as well as in the indie world. As an artist working in that realm, does that motivate you?

It’s always inspiring to hear music sung entirely in Spanish taking over mainstream charts or getting a lot of attention in the indie music world. I used to listen to someone like El Guincho a lot back when he released Alegranza, which blew my mind cause it sounded like a poppier, Spanish-speaking version of Panda Bear. It’s inspiring seeing how his production has evolved and how he’s now producing all these songs and albums for Rosalía, who’s so huge. I also spend a lot of time listening to Bad Bunny on the regular. I think X100PRE is one of the best albums, across all genres, of the last several years.

How are you coping with the current state of the world? What have you been up to under lockdown, musically or otherwise?

I’ve actually been in Bogotá, Colombia where my family lives now. I came down to visit and shortly after, the city and the airports closed down. A day before the stores closed I took a long walk through the city to go to a music store and buy an acoustic guitar, which has helped me a lot. I’ve been trying out new song ideas on it and getting some recordings of street sounds to maybe use later. There’s a guy who walks down our street everyday selling avocados and half-sings, half-yells “aguacate!” very loudly so the apartments can all hear him, that’s been my favorite one I’ve captured so far. While down here I also recorded a quarantine acoustic version of “Blonde Undone.”

Do you have any plans to tour this record once it’s possible? Any other tentative post-quarantine hopes or plans?

I hope to eventually be able to play concerts and tour with this new project. I know that may be far away, so a more realistic near future wish is to have a release party for it when I get back to NYC. I’d love to get all my friends together in a room and blast these tracks. But who knows when that will happen. It’s kind of surreal releasing something from isolation, you see all of the reaction online but once the day’s done, it’s just you in your house. But I’m positive and looking forward to seeing how I can push this project out in different ways during quarantine times – either through DIY/iPhone visuals, re-edits of tracks – one for “El Amanecer” is already done actually – at-home live performances and more.