Era of Reflection: Q&A with Inspired & the Sleep’s Max Greenhalgh 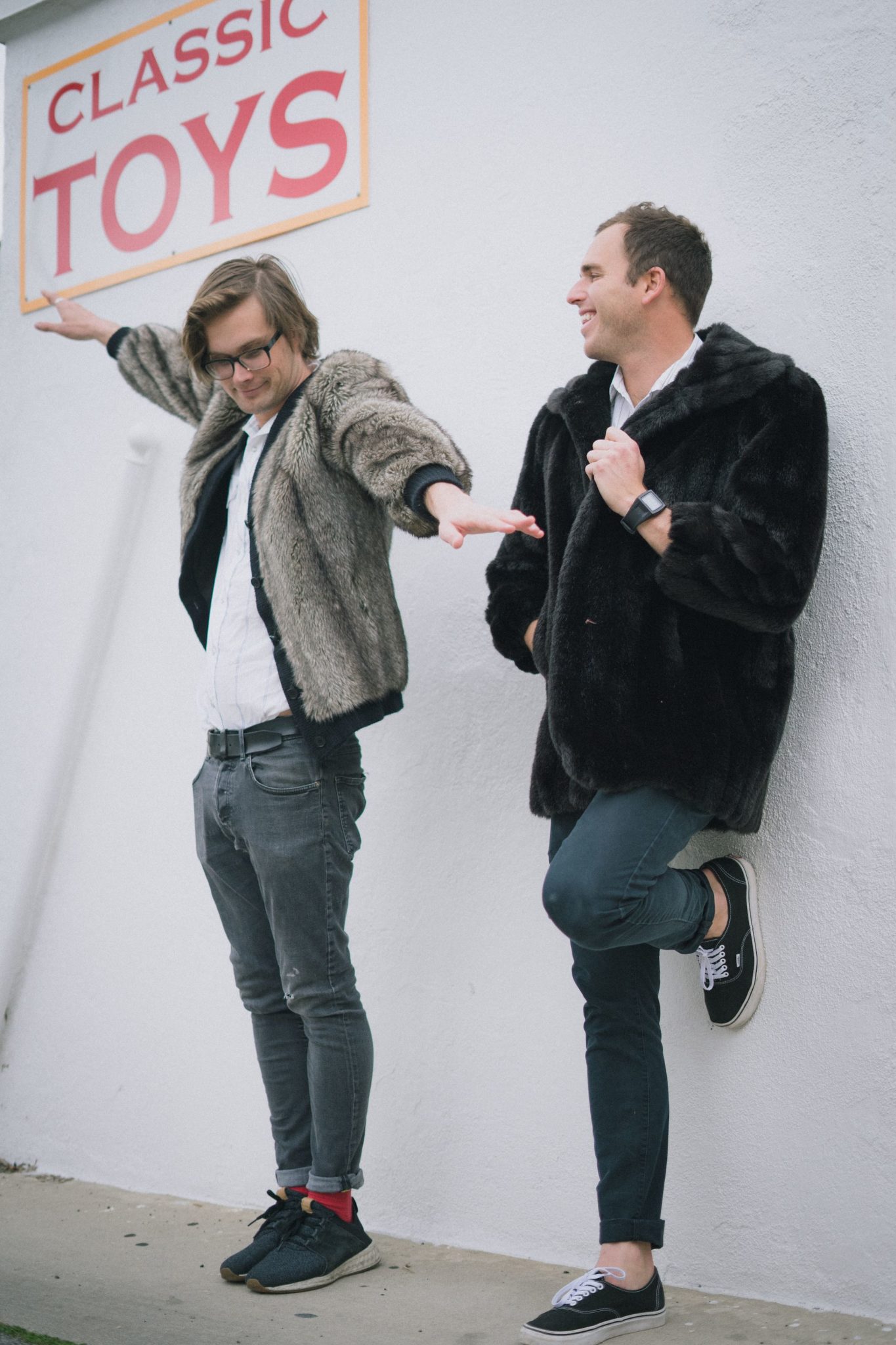 Typically, a debut album is an artist’s way of introducing themselves to the world. For Inspired & the Sleep frontman Max Greenhalgh, it’s the culmination of a nearly lifelong musical journey.

Having originally emerged from San Diego’s youth-driven DIY scene in high school, Greenhalgh eventually formed Inspired & the Sleep in his late teens and in 2012 released debut mixtape Teenager., an effusive display of bedroom lo-fi pop. A trifecta of excellent EPs would then follow: 2014’s Coming Up For Air, 2015’s Eyelid Kid, and 2017’s AVO, all of which saw Greenhalgh and bandmate Bryce Outcault progressively embracing lusher indie-pop soundscapes. Since then, the Los Angeles-based duo has released a handful of enticing singles that have highlighted all of their best qualities – within a poignant, shapeshifting blend of indie, soft-rock and psych-pop.

Greenhalgh has also remained a musical jack of all trades – a multi-instrumentalist, songwriter and producer who also plays in garage act The Thens and releases tunes under his solo moniker Max Green. He also continues to write, produce and collaborate on countless other projects with friends.

“The premise is I’m always trying to create something profound, and for me I get a lot of inspiration from taking different approaches to writing,” Greenhalgh shared. “So I tend to branch out quite a bit with new projects and working with all sorts of different people. I do tend to spread myself thin at times but I also firmly believe collaboration is a key part of the process.”

Inspired & the Sleep fastened all of that creative energy into their glorious and diverse self-titled debut LP, which was finally unleashed upon the world last month. Full of buoyant rhythms, driving guitar riffs, swooning keyboards and synths, and heart-on-your-sleeve lyrics, Inspired & the Sleep hits the duo’s sonic sweet spot. And it’s all bound together by Greenhalgh’s distinct songwriting voice; his singing voice is also startlingly soothing and pure.

We’d previously heard singles like loungey opener “Right Place, Right Time” and shimmering, dance-infused gem “Big Wide World.” But within the context of the whole album, their motifs and emotions come into even clearer focus. The anthemic chorus on “Big Wide World,” in particular, captures so much of the album’s core themes of longing, regret, and nostalgia for a Romantic past. Then there’s the rollicking alt-pop track “Jailbreak,” whose orchestra of atmospheric synths, noodling guitar chords and twinkling melodies gives way to feelings of wide-eyed wonder amidst moments of intense reflection. Meanwhile, the album is peppered with dashes of psychedelic trickery. The acid-washed jam “Getting Through,” for instance, features an off-kilter mix of analogue and digital percussion – stuttering drum machines come roaring through at sudden instances, always keeping you on your toes. Overall, Inspired & the Sleep is honest, sincere ear candy from start-to-finish.

The outbreak of COVID-19 at the exact moment of the album’s release would seem like a setback for a rising act like Inspired, but for Greenhalgh there are silver linings. For one, there’s more opportunity to focus on crafting new music while under lockdown. Plus, there’s an impactful quality to the album’s themes, sounds and vibes that feels particularly relatable to listeners during this unique moment in time.

“I think if anything this era is a good break for people to spend alone and learn from themselves and what they want from life,” said Greenhalgh. “This record definitely holds a big theme of reflection throughout and has a chiller aesthetic, which I think fits the change of pace.”

Greenhalgh chatted more about the band’s evolution with the album, his early DIY roots, and collaborating while under quarantine. You can read his thoughts and stream Inspired & the Sleep below. The LP is also available for purchase HERE.

Your debut LP is the culmination of several years of developing your sound – through various EPs, singles and live shows. How has Inspired & the Sleep’s music evolved since day one, and with this album, what have you learned about yourself as a musician?

So I would say Inspired originally started with me as a teenager recording on a 4-track cassette with my bass, Casio keyboard, and all sorts of random ideas. It then graduated into a three-piece band with my best friends and then back into a lo-fi bedroom project with the mixtape Teenager. That came out in 2012. From there it’s morphed into this double entity of a studio project and live band that is functioning today. I think the live show is such a different way to experience music than the recorded side, and the project feels like this whole accumulation of experiences and influences that has brought me to where I am today.

Like many indie artists, you originally came up through the youth-driven DIY scene. How did those early years shape your musical approach?

True story, [San Diego] punk venue the Che Café has been a big part of my musical upbringing. Went to so many shows, played a ton, met girlfriends there (laughs)…I think that’s what really got me into music and songwriting. My old band Tan Sister Radio used to do tons of DIY house show tours as well. I think that’s carried through in a sort of work ethic and mindset that remains with me. Kind of like a “no one’s gonna do it for you” vibe that’s driven me to keep working hard.

Bryce has been your partner in this project for many years now. What vital qualities does he bring to the table?

Bryce is the left brain equivalent to my chaotic right brain that balances everything out. He just got a job as a firefighter for the city of San Diego and we see each other less and less with me being located in L.A. However he’ll always be a part of the project to some degree. We’re pretty good with scheduling and I have a handful of good friends that help out with the project to make the damn thing happen.

Could you break down your guys’ recording and writing process a bit?

Well in essence I produce everything myself and bring in collaborators and musician friends here and there to help along with the process. It’s a bit all across the board sometimes in terms of where we start writing a song – sometimes it begins with a sample, beat, or just four chords on a piano. I definitely tend to gravitate towards melody and groove and sampling has been a real fun side of production.

What’s the main thing you want listeners to take away from the album?

I want people to interpret the songs in their own way. I always love the audience’s interpretation of song meanings when the actual meaning could be entirely different. I think this album focuses pretty heavily on relationships for me and I hope our audience can relate to that.

Pivoting a bit. The L.A. musical landscape is its own unique beast. Having lived there for a while now, how do you see yourself fitting into the L.A. music scene?

Oh man, I think what’s great about the L.A. music scene is how broad it extends and how many different facets there are. I wouldn’t say I’m the hugest participator of the L.A. scene per se, but I’ll say the reason I wanted to move to L.A. in the first place is I wanted be around people really doing it. And that sure as hell happened.

Out of all the musicians I know, you are probably the most rabid fan of attending concerts and festivals. Do you get especially inspired by live music?

Being a performer is such a huge part of my background. Whenever I’m producing [my own music] I inherently think of how I can perform the arrangement live.

Last fall you and I saw Daniel Caesar and Summer Walker at Camp Flog Gnaw. R&B is having a moment right now. Are you a big fan of R&B, and are there any aspects of the genre that have directly influenced Inspired’s music?

That’s right! Was stoked to see ya there and that was a killer festival. I think R&B is coming into a collision with the punk mindset and the bedroom producer culture. You have all these wonderfully unique performances making their way onto huge records for very influential artists.

You released the album right at the outbreak of COVID-19. Since you aren’t able to play shows, what kind of things are you doing to support the album and make sure it gets to as many listeners as possible?

Well yeah seems like everyone is affected by COVID these days. For us our record came out in March right as everything started happening in the states. We had our record release shows get cancelled and any potential touring for the current moment. Vinyl just got in which is amazing to have, cause they’re so dang pretty and people are ordering them which is flattering. I honestly think musicians, writers and producers should take this as a time to write and work on new material. This is the best time and I can see so much amazing home-produced music coming from this era.

What are you doing indoors these days to keep yourself sane, musical or otherwise?

I always got some musical projects to work on. I’ve actually been producing a whole bunch of lo-fi hip-hop recently, which has been a fun new endeavor. Also I’m getting a lot more confident in my mixing and working on that. Other than that chillin and cooking loads!

You’re an artist who loves to collaborate. Has it been tough not getting to work with other musicians as much as before? And when this is all over, do you plan on going extra hard on collabs?

You know, I’ve been collabing quite a bit remotely to begin that I think that’s not necessarily an issue for me. I love in-person sessions all the time, however I continue to write loads of music for collabs that’s sent to me. It’s nice to have a twenty-four hour lockout space where I can make noise and write in this time.

Do you have any other specific post-quarantine plans?

I’m gonna go to the beach tons this summer when everything dies down. Definitely wanna get down to Mexico!