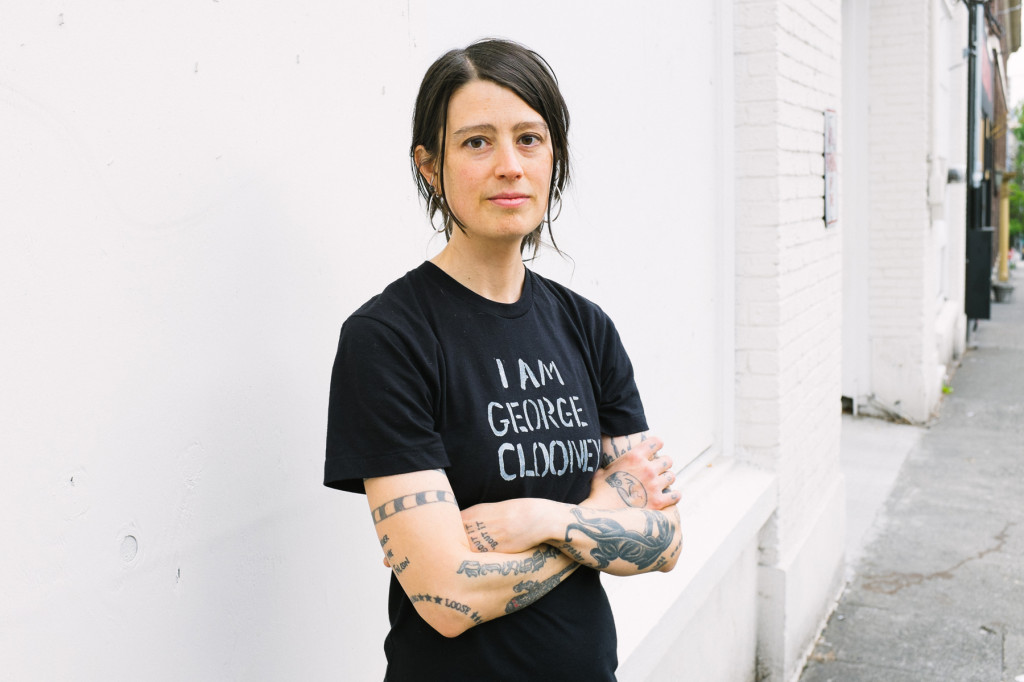 Originally Jen Ghetto of S, formerly of Carissa’s Weird, wrote a Friends With Benefits editorial. The piece was fractured into train of thought writing that mostly struggled with insecurity towards being considered a capable writer and sought comfort by quoting Point Break. While the Point Break obsessing was a slight surprise, her latest album, Cool Choices, is wrought with an emotional trauma calibrated to the same dial where you’ll find Elliott Smith’s XO, making the topic of anxiety her forte.

Self-diagnosing herself as “Aspergers-y” in social situations, Ghetto is generally uncomfortable unless the subject of action films comes up. Get her going and she’ll start shouting “Utah! Get me two!” at you. Rather than coaxing her into refining the original editorial, I called up Ghetto to talk about Point Break and a theory she’d developed regarding the 90s film’s similarities to The Fast & The Furious. Though perhaps theory is not the appropriate word, since our discussion proved this is a well-tested proposal with layers that suggest, if not prove, there is a formula at play within these films and Point Break is the catalyst. In a serendipitous twist, the Friday I made the call was Paul Walker’s birthday, a coincidence she was quick to note.

When did you first see Point Break?

I’m going to date myself here, probably. I was spending the summer with my grandma. She didn’t care that I was renting rated R movies, which I wasn’t really allowed to watch. So I went to the Blockbuster and it was on VHS at that time. [Laughs.] I was young.

I’ve always thought it was an awesome movie, but some how a couple years ago I was just watching it all the time. I think I was just having a hard time and Point Break was really something else. Everything they say is amazing. So I was watching it every day. It was really speaking to me and now I make everybody watch it.

Am I going to convince you by the end of this interview?

I hope so. I have a base knowledge of the plot.

I liked Fast & The Furious for a long time and then finally I was like Paul Walker, his delivery in Fast & The Furious is so awkward as well. It’s just not very good. People love him and I think he’s great. It’s the same with Keanu Reeves.

When did you start seeing the similarities between the two films?

It started a couple years ago when they announced they were going to remake Point Break. I was really curious. Like are you kidding me? This movie is so great. Why would you remake it?

So they were talking about remaking it, but with a different sport in mind. Like maybe more extreme sports this time. It hit me, like wait a minute that’s the same plot as Fast & The Furious. It just all came together.

So in a way they’ve already remade Point Break.

I think they did. So you have two dudes who they obviously have something going on. I was just watching Fast & The Furious again the other day and the whole beginning scene where Paul Walker and Vin Diesel first lay eyes on each other is pretty homoerotic. Like they are staring at each other and it’s like whoa what’s happening in this movie right now?

What is it about Fast & The Furious that you really enjoy?

I don’t know. I think I saw it on tour. We didn’t really have a choice of what movie we were going to see. It was like we don’t have much time to kill, I guess we’re seeing Fast & The Furious. During tours you can get into these weird phases. I just remember thinking that movie was awesome. And maybe it wasn’t, but my state of the mind at the time… getting to be entertained… like it was before cell phones. [Laughs.] No, cell phones were out. I just didn’t have one yet.

I’m just a real action movie sucker. The dialogue is so terrible, but really great lines that you have to repeat later. Point Break is great for that too. When Jason [Baxter of Hardly Art] told me we were going to be doing this interview we just traded Point Break quotes back and forth for like a week.

Have you ever had that moment of your once in a lifetime wave?

I’ve probably felt that way before, but looking back it probably wasn’t deserving of being blown that far out of proportion.

My wave would be going to space. If that opportunity ever comes up, sign me up. People ask ‘well what if you can’t come back?’ Well I think I would still go. Just because who gets to do that? Who gets to go to space unless you’re a billionaire?

In your piece you submitted, it also mentions Johnny Mnemonic. Does this film also fit into your favorites canon?

I’d never seen it before. Here is the thing I realized when I was watching Johnny Mnemonic. I am a Keanu Reeves fan. It came on the Netflix and I was surprised I’d never seen it before. I used to get it confused with The Matrix. They are nothing… aside from being about the Internet… they are not the same. [Laughs.] There’s something about how terrible he is that I really enjoy.

It’s weird. He’s made it his thing for so long that people appreciate it.

You don’t really remember his delivery until you’re watching the movie. Even in Speed, he just doesn’t quite pull off tough cop. He pulls of Bill & Ted really well. Stoner teenager. But, it’s like I still liked him in Speed.

But does his bad acting ever pull you out of the story?

When I was watching Johnny Mnemonic what really did it was how it’s in the future, but I like watching old movies about the future because the TVs are always the same and the computers are crazy. They do crazy things, but the graphics are really terrible, like that old green on black 80s graphic.

Let’s talk about the remake of Point Break. I looked it up and the actors they have signed on are Luke Bracey, Ray Winstone, and Edgar Ramirez. Do you know who any of those actors are?

I don’t. Do you know if they are popular? I could be a little out of touch.

I don’t. I’m out of touch as well. There’s something immediately alarming about feeling like who’s in this?

And like Point Break as it is, is a great action movie. But I think because Kathryn Bigelow directed it, she did Hurt Locker, that she put a lot of… there’s a lot of character development. You really care about everybody. You care about the bankrobbers. You understand where they are coming from.

[Author’s note: Ghetto’s theory on Fast & The Furious being the original remake of Point Break was strengthened after I discovered the Point Break remake cinematographer is Ericson Core, the cinematographer for the original Fast & The Furious. Also, a partial stretch but Luke Bracey’s, who is set to play Reeves’ Johnny Utah role, facial features have a little bit of Keanu and a little bit of Paul.]

I don’t recall Paul Walker having a great deal of back story to his cop character.

I think because they made seven other Fast & The Furiouses. Then you kind of get to know them a little better.

They’ve had time to flesh it out.

What’s funny about when they reunited the original cast… it was 10 years later. I couldn’t believe it had been 10 years, then I watched the original and the fashion in it is so hilarious. It’s like that early 2000 fashion.

Thoughts on Anthony Kiedis’ acting in the original Point Break?

It’s not the best, but I’m glad he’s in it. He has a little fight with Keanu Reeves. You kind of want to cover your eyes when he’s talking.

Then you’ve got Ja Rule who’s in Fast & The Furious, who’s a much better actor.

And Ludacris. Who’s a fine actor.

The similiarties, they just keep coming up.

I really think it’s best to watch them back to back. Point Break will by far always be better than Fast & The Furious.

With Fast & The Furious I always get the review: it wasn’t as bad as I thought it would be.

S’s Cool Choices is out September 23 on Hardly Art.