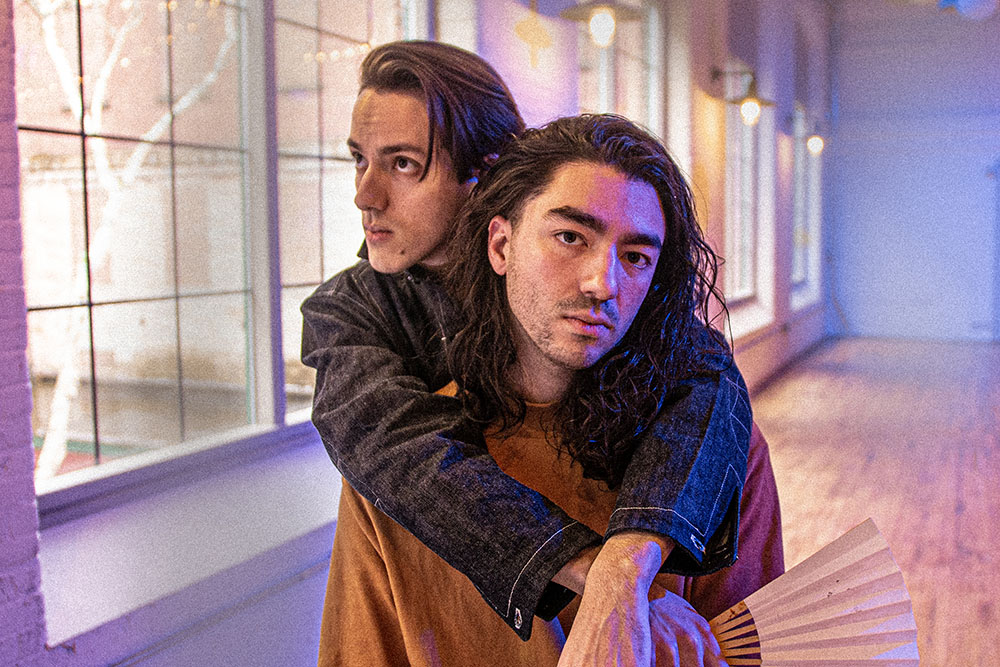 It seems like for Sean and Jamie Oshima, better known as the Oshima Brothers, their creative work knows no bounds. Their second album Dark Nights Golden Days, released on April 1st, is a 17-track journey through lush layers and broad genres. The brothers tackle their music and video creation process with an equal fervor – each song on the record being accompanied with a music video directed by the brothers themselves.

“Goldmine” is a song that was written by Sean in what felt like three minutes. “I wrote ‘Goldmine’ while the sun burned my skin on a beach in Lincolnville, Maine. Some songs take years to write, some come in a flash. This one felt complete in the space of three minutes. For the next hour I sang it on repeat to the woman I love.”

The music video follows a couple through a regular day together. Making dinner, playing the piano, going outside, holding hands – it celebrates the simple moments. “Goldmine” is one story of the seventeen that found themselves on this record.

Impose talked with the brothers about their process of making the record, the song “Goldmine” and the making of the music video. Watch and read below.

As a pair, together you have found a way to be very independent when it comes to your music; producing, singing, playing all the instrumentals and producing and shooting your own music videos. What has made the both of you so invested in being able to create everything you release on your own?

Sean: Jamie and I are both control freaks. We come from a long line of artists, and we need the process: dreaming, songwriting, playing, performing, and filming, it’s all important. Plus, we’re brothers, we go way back, and we collaborate so effortlessly together.

Jamie: We grew up in the middle of the woods far from friends and that enabled me to become an introverted and obsessive multi-instrumentalist who recorded and filmed every part of my creative process.

As siblings, creating something together is a special experience. I think some of the best collaborations can happen between siblings because of the lack of expectations and acceptance of one another aids in creating a realness. The bond between you two is so clear, songs like “The Afterglow” recounting all the memories of your youth or “Boys on Tape ‘01” which introduces the album with a recording of you two as children. What is the experience making music with one another and how would you say that’s shaped you as musicians?

Sean: Everyone mentions our harmonies and the way our voices blend, and it makes sense…We’ve been eating the same food, mispronouncing the same words, and singing together for over two decades. We’re stronger together than we are apart. I’d be a terrible solo artist if I started now cause I’ve relied on Jamie’s talents my whole life.

Jamie: And I would be in a basement somewhere creating wild musical journeys that no one ever heard without Sean to share and get me out to play shows. There are innate advantages to being siblings in a band but also obvious difficulties. For example, it’s so easy to not be able to get away from work. One can be eating dinner and get interrogated on the state of the current project and work-related conversations any time of the day. We work hard to make specific times to one at a time be brothers and friends and business partners all individually at different times.

You have said that your intention is to “make music that feels good to us.” I know that listening to your music is very serene and gentle. What elements in your music do you find most pivotal in creating that “feel good” feeling?

Jamie: I am often blown away by the poetry Sean writes and how good it flows and feels, and I tend to help move the messages to align and feel as good. I think the message, rhymes, the cadence of the words, and melody are the most important. The better the song the easier it is to massage the music and production into place.

There are so many different elements from various genres pulled into this record; jazz, Bossanova guitar(Flowers on the Moon), disco (Last Minute Lover), soul, r&b (Mountain), and of course folk. Would you consider yourselves listeners of many genres? And why was it important to you to weave them together on this record?

Jaime: I listen to so many different styles of music and they creep into our sound whether we want them to or not.

Sean: All humans come from different places, different backgrounds, different genres, none are better than the other.

“Goldmine” to me represents a simple happiness – the moments when you are happy at the littlest things; the taste of coffee, the tree in your yard you always looked at but never really noticed, the spring sun that’s starting to warm up – and maybe I got this image from the beautiful video that accompanies this song. Tell us what inspired this song and the video alike.

Sean: What a poetic question, god I love it. Well, some songs take me years to write, and some come all at once. I wrote “Goldmine” in the space of like five minutes on the beach in Lincolnville, Maine watching the person I love swimming in the ocean.

Jamie: The video fits into the biggest project I’ve ever taken on, a visual album. Every track has a video that accompanies it. We hired a couple of friends (strangers to each other) to act in a simple film about love. I directed, filmed, and designed the lighting (one of the hardest parts of filmmaking) with a crew of me, Sean my errand boy, and the two actors.

You have a story to tell with all of the videos that accompany the songs on this album. What about the visual aspect of the music is so important to include within the story this album already tells?

Sean: Our songs tell stories and help us process our lives, but with film, we can show stories and get even deeper. It’s a lot of fucking fun.

Jamie: To be clear, I have so much fucking fun making the videos. And I drag Sean along for the ride because I think they’ll be a beautiful extension of the stories he’s created with his lyrics and melody.