Radio On Sits Down To Talk Latest Single, Longboarding, & Art 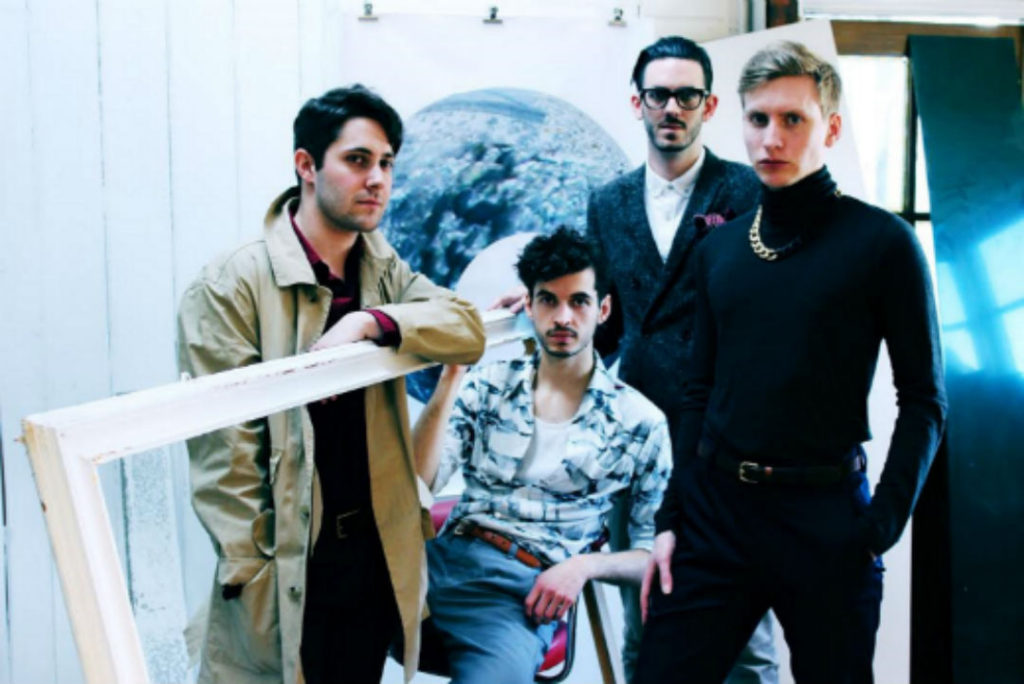 Radio On–an intriguing synth-pop band from the UK–is making big strides with their music. Having drawn comparisons to bands such as Phoenix, Talking Heads, and MGMT with their 2014 song “Don’t Wait”, their sound has stayed consistently well put together and very intricate. And “intricate” is absolutely a word that would describe the quartet. Sam Hayward (vocals), Adam Hartley (guitar), Alex Deery (Synths) and James Johnston (percussion) came up with the band name because of a mutual love for the 1979 film Radio On by Chris Petit. That film–as well as several like-minded road movies–serves as inspiration for their sound and the way they operate as a band, hence the intricacy.

The guys of Radio On are intelligent, quick-witted, and infinitely creative. Thankfully, we get a chance to witness this through their music. Their newest single–“Coast”–debuted in May to some pretty great reviews, and we have had it on rotation for a couple of weeks now. It’s a catchy song, painting pictures of tan, shaggy haired humans in cutoff tank tops riding their longboards up and down the boardwalk in the sunshine. It’s a backyard barbecue soundtrack, a singalong song for date night rides with the windows down, and everything we love about music.

Radio On sat down with us to discuss the track, make us laugh, and–of course–be everyone’s new favorite.

James: I’ve been looking for an excuse to cut a body part off in public ‘for art’ for a while now. Looks like you’ve just given it to me!

Where do you each originally hail from?

Sam: I’m from Carnforth near Lancaster. I think that I was so bored there that I had to create my own fun. It definitely helped my imagination.
James: I’m from Fife, Scotland, which means theres a 95% chance I’m better at yelling, drinking and getting stabbed than you.
Alex: Preston – it has a famous bus station, and I like falling asleep on buses.
Adam: Lancaster – famous for witch trials…. And it has a castle.

How old were you when you started getting into music?

Sam: I wrote my first song when I was about 6. It was called ‘Milk Tree’ and was a total Pulp rip off. I think I stole some lines from a Christmas Carol too…or a hymn we’d been taught at school.
James: I’ve got really happy memories of my dad playing atonal jazz in the house really loudly throughout my adolescence. My musical background is that and a lot of musical theatre.
Alex: I began studying classical guitar when I was a small and maladjusted child. That + atonal jazz + Christmas carols = difficult third album?
Adam: multiple instruments over many years, but guitar was the one that fit the best. I was brought up on glam rock by my parents. A next door neighbour opened my eyes to punk and a lot of other music.

You all met while studying in London. Do you have any “meet cute” stories you’d like to share?

James: We used to practice in a room in a college run by Jesuit priests. It was a really beautiful place and we miss rehearsing there but we’re still waiting on a reply from the Holy See about our official Papal seal.

You chose the band name based on the 1979 film. Was that an easy consensus? Were there other contenders?

Sam: It was a pretty easy decision actually. We’d all been talking a lot about the film and it had had a big influence on our sound and image as we were getting together. We actually had a song called ‘Radio On’ that we were working on at the time as well! We were just coming up with ideas at practice one day and James suggested it…we debated it for a little while because it almost felt too easy! But it stuck.

“Coast” is such a great song, with a very poppy, light-hearted vibe. Perfect for coasting on a longboard in the summer months. What made you choose it as your single?

Sam: I think it’s because it grabs you immediately. Alex wrote that amazing hook and then found that great Kanye-inspired synth sound for it. It makes you sit up and take notice.
Alex: Thanks Sam! Longboarding sounds nice. I reckon you could happily longboard to most of my all-time favourite songs. Maybe that’s the key to great music? Anyway, as everyone knows – you don’t really choose a single – the single chooses you…*drops longboard, hops on and pushes off*…

We are also very partial to “You’re Always Right.” What inspired that song?

Sam: “You’re Always Right” started from a David Hockney show I went to, depicting the numerous Yorkshire towns in which the artist had lived. All the paintings had a road running through them and it struck me that maybe he wasn’t just depicting a place so much as a time in his life, one he was moving through. It was that idea of movement that interested me; there’s a bittersweet positivity to it. It actually inspired me to go on a road trip that summer around that area to track down the locations he’d painted. It was an amazing trip, seeing these quiet towns like the one I’d grown up in through the eyes of a great artist.

Is the writing process difficult to balance with so many strong voices in the group?

Sam: We collaborate well. Demos get bounced back and forth between me and Alex for a few days or weeks until we’re happy we have something. If both of us don’t end up being happy with it, we just move on to the next track.

You worked with Gethin Pearson on several tracks. He’s AMAZING! What was that experience like?

Sam: He is great fun to work with, love him.
James: He is a wonderful Welsh man. I think he should be King of Wales.
Alex: All of these things are true, and more. His excellent collection of snapbacks is second only to his sonic mastery.

We see that you list Robyn as one of your key influences. What’s your opinion on Taran Killam’s  interpretation of “Call Your Girlfriend”?

If you could tour with anyone—living or deceased—who would it be, and why?

Sam: Blood Orange. He is absolutely incredible and then I could be his best friend and convince him to work with us.
James: Robyn, Kathleen Hanna or Jacques Brel
Alex: Scott Walker. I want to see his rider.
Adam: Miles Davies. I feel like the after party would be something to see.

What is your opinion on the state of the music industry?

Sam: No comment. Lol.
Alex: My opinion is long, meandering and peppered with factual inaccuracies.
Adam: …..

What is one thing that you think is underappreciated in this world? Rant about it!

Sam: RADIO ON (the film). It is incredible.
James: Valerie Solanas and Brannigans Roast Ham and Mustard Crisps
Alex: Taking your socks off, but like, only halfway off. So they’re off your ankles, but still on your feet, covering your toesies.

What kind of advice do you have for creators and artists everywhere?

Radio On had nothing but high praises for Eliot Jones, who does all their artwork and press shots. They said he is an absolutely incredible artist, and you should probably go check him out.

PrevPreviousNorth Carolina, Take Your Shirt Off
NextErik Phillips of Cat Be Damned Discusses Daydreams in a Roach Motel, IntroversionNext