Stream “Entertain Me” By Nots, Learn More About The Band from Frontwoman Natalie Hoffmann 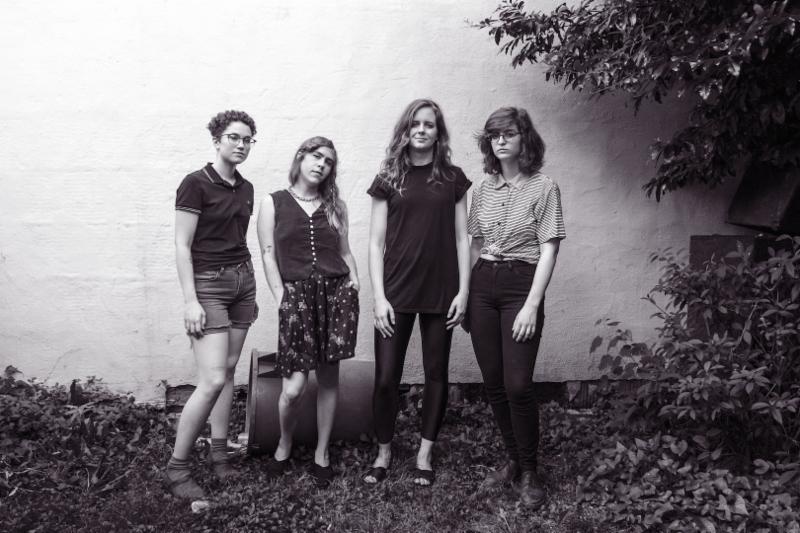 Picture this: You’re up late, sifting through every television station imaginable (in our world of thousands), trying to choose one good program to land on. And then you see it. “Amidst horrible prayer rug commercials and ‘as seen on tv’ specials, a late night public access filmed to VHS variety show” catches your attention. Nots is hosting, and their quirky senses of humor and interesting flair for the creative draw you in.

It’s cheesy, perhaps, but that’s how they’d like to be introduced to the world. At least that’s how frontwoman Natalie Hoffmann described their grand entrance. At the dawn of infomercials and 10 minute ads about mops, this may have seemed drab. Today, it’s unique.

Their latest single, “Entertain Me”, hit the airwaves weeks ago. A minute and a half of instrumentals lead into an abrasive, interestingly-woven track, Natalie at the helm of it with her insane vocals. It’s frantic–a live wire, perhaps–and makes for a fun introduction to their upcoming album, Cosmetic.

Listen to the track to get a good vibe going on your day, then read up on Nots with our quick Q&A with Natalie, below.

How do you think living in Memphis may help shape your sound, or your feelings toward music?

People are pretty honest here. If they don’t like the band, they stand outside and smoke. You can smoke indoors at almost every bar in Memphis. If they like the band, usually they stay inside and get stupid and wild. Sometimes a show will fall in between these 2 reactions, but not often. This is something I’ve always loved about shows in Memphis. This is also why bands constantly whine to me on tour about how bad their Memphis show was.

What are your feelings on women in the music industry? Do you find that being an all-women band changes the way you are seen?

We are all feminists and “all female” is not a genre.

You announced recently that you’ll be playing Riot Fest. What are you most looking forward to about that opportunity?

In your band description, you make note that you’re not content with “an Earth-hugging ‘we need to get back to nature’ hippie copout”. Have you ever been in a situation where you just accepted that you feel a little more pull toward a niche audience that you normally don’t associate with?

Yes? I like the Grateful Dead but I’m not down with hippie copouts.

Cosmetic is your second full-length album. How has the recording process changed for you since the first album?

We recorded with a close friend, Keith Cooper, and we had pretty much just finished all of the songs before we went to record. Some of them were finished in the studio, so they all have this improv, or really, about-to-fall-apart feeling. We recorded almost all of it live, except a few overdubs. We’d just pick the live track with the best verve and go from there. Recording in a good friend’s living room to tape was a great direction for us to go. I think you can hear the energy and openness to go in all sorts of different directions in the recordings.

Your voice isn’t featured in “Entertain Me” until about 1:42. Was that a conscious decision on your part, or did it happen organically?

It was organic. I wanted to give the song space to figure itself out before the vocals came in, and I wanted the repetitive and distorted nature of the instruments to be reflected in the vocals, so it needed some time to get the riff stuck in the listener’s head.

What inspired the track, specifically?

“Entertain Me” is a song in a constant state of movement and deterioration around one central, repeating part. No two live versions of it sound the same. Drawing influences from experimental no wave, postpunk, and psychedelic music, “Entertain Me” takes its cues from the edges of genres, where one begins to blend into another, and nothing is easily classified. The lyrics reflect the cyclical, distorted nature of the song, addressing different facets of the grotesque horror show going on in American politics and how they are portrayed- the rise of Trump, the reality-TV-like nature of American news, the almost-forced compliance of the viewer, and the for-profit-constructed “right” of the viewer, the consumer, to require constant entertainment in order to participate, and to live.

Cosmetic will be out on Goner September 9th.

PrevPreviousJesse Christiansen Talks 3 EP Series, Musical Past, & Living With Purpose
NextFree Pizza Talks All The Music, Really Wants You To Look Up Your Astrological ChartNext