Well my loyal Imposians, I have left the Midwest for the left coast, to a land of excessive tattoos, smogged cars and “hella.” Sacramento, the capital, is my new home and with a new home comes the process of getting past the bullshit local bands and gaining access to the gems within.

Craig Finn was right when he said, “Sacramento, it swung at us first, but it ended up going down gentle.” After the exhausting task of weeding through MySpace music, listening to dozens of bands craving the chance to be the next Deftones or Papa Roach, the only two bands from this city to reach major markets in the past five years (I must have completely missed the Cake copy cat era). I will give it to this city: the local scene is in abundance, seemingly supportive of one another, with a handful of dedicated publications to help get the word out. If you have not heard of Alive and Kicking, get acquainted with a 18-year local rag that is practically the handbook of the scene, or even the handbook to starting a local music magazine.

Saved by my crop dusting style of band friendship requests on MySpace, I received a bulletin for a show at Luna’s Cafe last Saturday. Luna’s Cafe is barely 20 feet wide, with a stage roughly one foot high and five feet wide, enough room for a small drum kit, but each band found room for more.

Arriving late, I missed MOM , possibly for the best, as I was in no mood to have nightmares. Until I find an apartment I am living with my friend’s family and the room I occupy has a shelf of stuffed animals. MOM’s terrifying acid-warped terror pop seems obsessed with fluffy friends, but in a demon possessed Charmin bear army sort of way. I also missed Art Lessing & The Flower Vato, a band I would like to eventually see.

The Ganglians embody my preconceptions of western music. I expected to be bombarded with hundreds of bands bent on being The Beach Boys in lo-fi form or even hoped for it. The Ganglians seem to still be working out a few of the kinks, although in their defense it can’t be easy for a four piece to get comfortable in such a small space, as the bassist stood between two fully seated tables, leaning back towards the stage to sing back up vocals. The occasional “dude, what are you doing” glance was traded between members as they worked in the confined space. At one point the drummer neglected to properly arrange his kit until the last available minute, after the lead singer had already begun singing. He got the stink eye for it, but his minor adjustment paid off in a brisk poppy tune. It was a shame the jangly, gangly band only had time for five songs, but they were received with claps, whistles and a collective sigh when it had to end.

Little Teeth are recent signees to Absolutely Kosher. I cannot think of a better label for this band. Besides the label being based in Little Teeth’s home of San Francisco, it shares a common bond of ingenuity with acts like Sunset Rubdown or even The Wrens. As I watched singer, banjoist, guitarist, accordionist and human percussionist Dannie Murrie pluck or pull at a hand-held weapon while stomping a leg taped full of bells, tambourines and bones, it became an atmospheric understanding that Little Teeth deserve a chance at national exposure. Three people can make a lot of noise when each member is strapped up like a one-man band. Guitars dropped to the ground, quickly replaced by accordions, cellos, violins and melodicas. Each member owed a free hand, foot or mouth to the creation of a fully-fledged freakout sound, which is how the threesome closed its set. I picked up the free five song demo on my way out, delighted to have a rough copy of a soon-to-be wholly realized debut, but disappointed that its magnum opus of a shredding wall of noise will be kept under wraps until the September release date.

A quick call to arms goes out to Sacramento. I am currently sans photographer and not much of one, myself. If you are a skilled shooter, get at me. 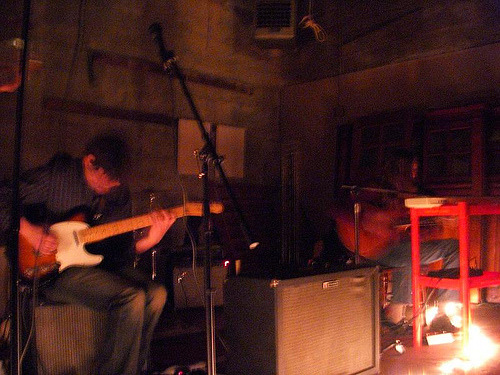