The Village Voice, who apparently have been reading my past odes to Bushwick’s Goodbye Blue Monday (or maybe, just maybe, are savvy to these things on their own), called the cozy yet dazzlingly-bric-a-brac-crowded space “The Best Place To See Great Up-and-coming Bands Before They Embrace Their Own Hype” in their best of 2007. While I’d endorse that definition up to the word “Bands”, I think Friday’s show stands in direct contradiction to the last bit: I have a suspicion that local Bushwick rapper Andy D had already embraced his own hype before he had songs. But more on him later.

First, for the uninitiated, GBM is officially some kind of coffee shop / bar / venue / perpetual swap meet / junk sculpture workshop and recommends itself by the following:

Case in point: Friday’s show consisted of a weird but excellent progression from drone rock, to party rap, to minimalist new wave. The drone rockers, GBM regulars Slow/Dynamite, center their sound around eerie, reverb-washed guitar backed by two drummers. The formula is a simple but still-effective toying with repetition and variation. The double-rhythm section of Nick and Errin lends an almost tribal pulse for the Mike’s guitar to weave through and around with subtle variations keep things moving smoothly and larger variations drawing greater weight and resonance when they do appear at last. Errin’s voice, heavily amplified and echoed, adds a final embellishment, more textural than verbal. Think, perhaps, of Earth with looser, more ambient melodies balanced against heavier rhythms. And with an ongoing project to pair video pieces with 52 weekly songs from last year.

All of Andy D’s songs are awesome, and he will be the first to tell you. So awesome as to easily balance such vital issues facing the modern world as werewolves and female ejaculation. So awesome that the fanny pack hugging his hip — completing an ensemble of faux-rabbit-fur vest, bare chest, gold chains, and rat-tail — isn’t just for show: it contains his much-needed sweat band. So awesome that– okay, okay, I know you think you’ve seen this sort of overblown, swaggering rapper-self-parody before, but there’s no irony here, and the best evidence I can give you in Andy D’s favor is actual audience reaction: rather than just stand around uncomfortably while our protagonist waxed poetic about his (and God’s) love of drunk girls, Andy D was actually able to bring the party to the audience.

The usually sedate GBM crowds rose from their overstuffed easy chairs and were actually dancing; the beats, even spooling off an iPod, were surprisingly funky, and even the most satiric rhymes snappily horrifying/hilarious. Who can argue with fun? Certainly no one at Goodbye Blue Monday that night. It was the Weekend, and Andy D Rocked Our Show. (In fact, are “Andy D Rocked My Show” t-shirts too much to hope for? I hope not.)

Headliners Macaque were another of those pleasant GBM-surprises. I knew about the other two acts before the show (though I had no idea that Andy D would be there), but I’d never run across Macaque or their clean, sparse synth-pop before, but it was immediately likeable. Keyboardist Chris Hart’s arrangements were a fairly perfunctory collection of electro lines and handclaps (besides the sublime minimal new wave of “Inappropriately”, easily the set standout) but singer Evers was uncommonly animated (a background in dance is plausible) and together they exuded charm and style. And at their more unusual and stripped down moments, I found myself recalling Telepathe. Apparently the debut Macaque EP is getting a release party at the Knitting Factory Tap Bar on February 7th; Andy D will be joining them once again.

Closing imperative: venture down the the J to Goodbye Blue Monday. With the (however excellent) Silent Barn packing its space for the likes of Dan Deacon and the Black Lips, GBM is the chillest venue in Brooklyn that nonetheless manages to pull in anything like this level of eclectic quality. 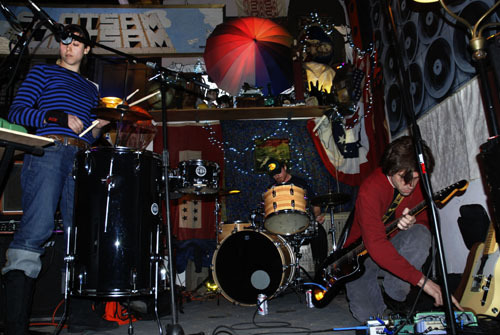 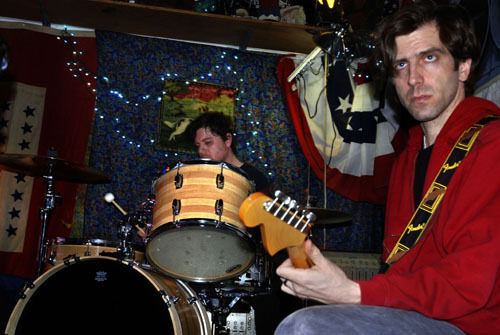 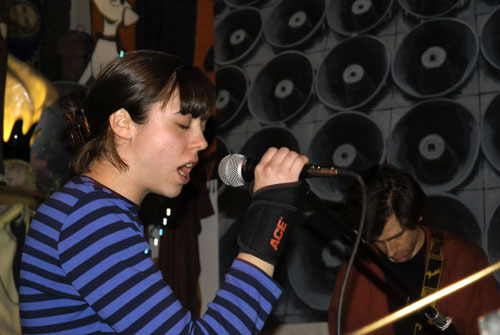 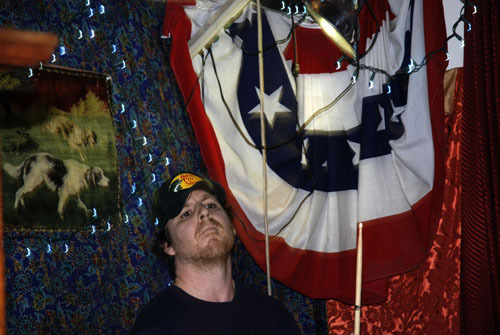 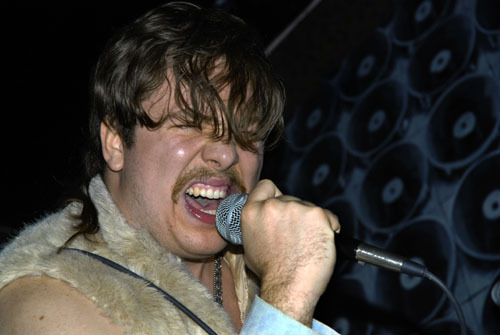 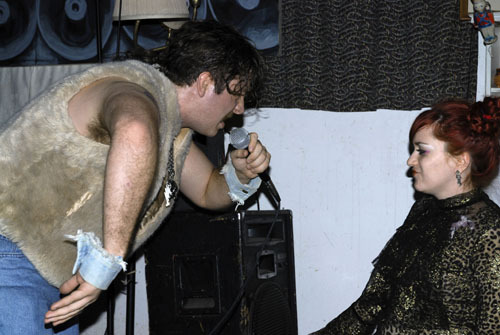 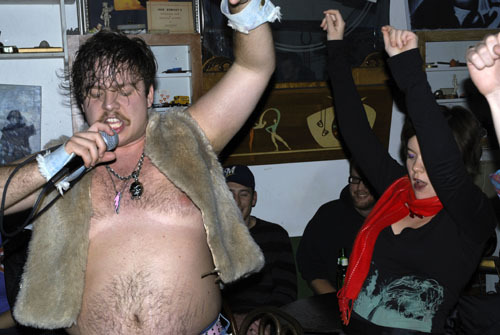 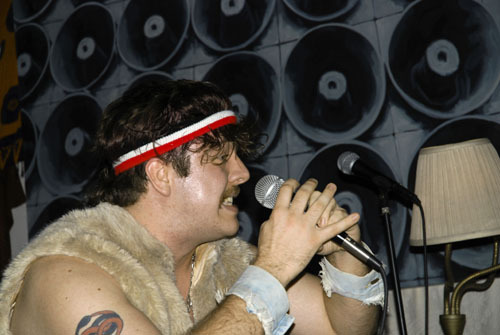 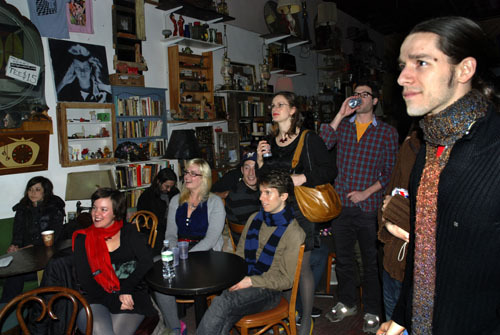 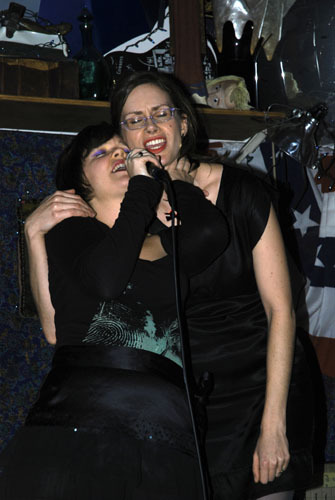 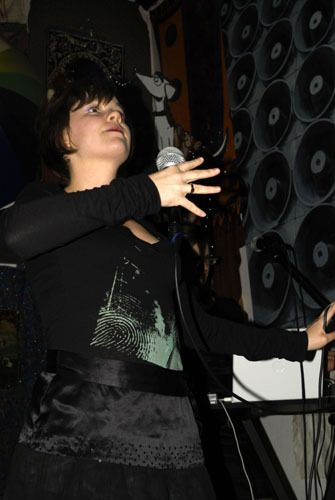 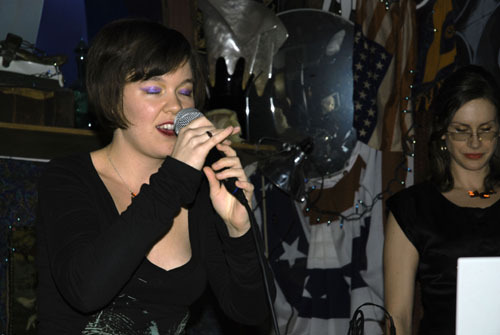 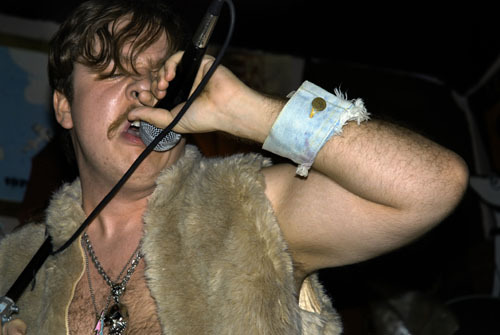