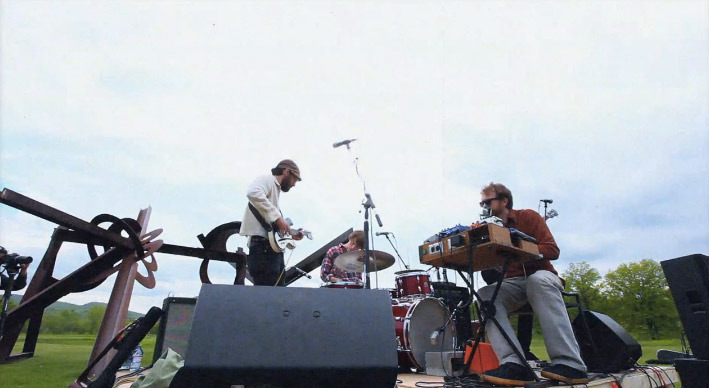 A month or so ago, after their sold out show at 285 Kent in Brooklyn, Woods cruised up to a spot in the Hudson Valley called Storm King Arts Center and played on a tiny stage in a big field full of gigantic pieces of modern sculpture, for about 100 people. In particular, they were in front of a gigantic Mark di Suvero twisted swingset of steel I-beams, and in the background, further afield, was another di Suvero, this one a modernized idea of an ankh.

Woods played around 4 pm. Beer, Lemonade, and hippied-out quesadillas were available for purchase; guests were welcome to wander the grounds, although the Nam June Paik had been taken in for refurbishing and was not on display. "Why are so many people asking to see that one today?" asked the museum employee. Openers Widowspeak played first, and drummer Michael Stasiak joined Woods for some of their songs, but not the 11 minute jam in this video, which is taken from their newly announced September LP, Bend Beyond, on Woodsist of course. The pastoral environment is really the best way to see Woods – their melodies are almost too complex to be absorbed in a smoky club, and instead the correct aftertaste is grass and marsh.

You can see Woods in the woods if you have the incredible luck of attending the Woodsist Festival in Big Sur, California. That, and other tour dates below.