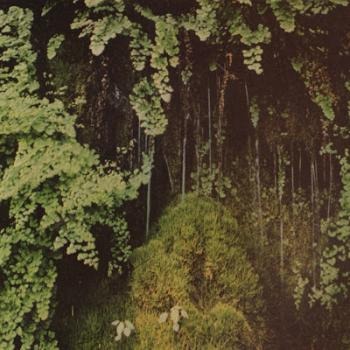 I so often wonder if/how it's possible that the TOME has any readers at all. But if you are reading this right now, and have read the words typed up on this h'yar webpage in the past, and perhaps even miraculously come across this little post from TOME'r Pete (p.s. Pete, where ya been?), then well… well, then you did that, and you know that there's this person from Milwaukee who makes music as Apollo Vermouth and that we liked it. Said person has a new album called Burning In Heaven. The TOME likes it as well.

Pete discussed the sheer loudness and abrasiveness of Psychic Youth Rally, which is ostensibly a noise/ambient record. But here AV tries something a little different, keeping the brand of white-washed drones relatively quiet and reigned in; even if you crank up the volume, things really just don't blare and blast as they did with past AV work. But drone this does anyway, most tracks finding a nice chord progression to repeat and then sand-blasting the mix with a scratchy texture on top. But things don't exactly stop there either. Each of these tracks has its own unique defining feature, whether it's the lulling finger-picked guitar of “Watson 820” or the Boards of Canada-ish beat that grounds “Orange Cream Dream,” every single song has its own distinctly defining character. All of it, however, seems to be rooted in guitar work, and that's pretty clear with the strumming changes sunken deep into the mix of static and drone, structures sort of hidden from plain ear-shot, details you'll have to really look for, though it's not hard to find yourself actually looking for them. Which brings us full circle to Pete's previous assessment of Psychic Youth Rally.

For he talked about how the mystery of AV is really the key to enjoying the music. And though it seems like there's less mystery here than ever (especially if you visit the AV blog and read all about the personal experiences with the songs on this record), at the same time there's more mystery than ever. It starts with the fact that AV is using similar tricks in completely new contexts—take for example the opening moments of the album, which introduces a puzzling sample, as did Psychic Youth Rally, but this one of (even more puzzlingly) The Monkees' Michael Nesmith. The album is full of alluring question marks like this, most of which require deeply intensive listens to attempt to grasp their myopic and unanswerable beauties, attributes which each track most assuredly has in its own way (especially “Alpine”… good lord, what a gorgeous piece of music). But as difficult as Apollo Vermouth is, it's just as easy a thing to embrace the challenge of listening while realizing that this is actually pretty simple stuff to enjoy… for the most part. Things get tougher towards the end with “Classic Climax,” which is a track that lasts for seven solid minutes without much arc or direction, a wind-tunnel sound that never actually climaxes the entire time it hangs around your eardrums. Then right into “Red Light” which starts out with what sounds like a James Taylor sample thrown mercilessly into a jet engine turbine before a pleasant, this time shoegazing/Spiritualized-like guitar refrain takes over to lead the album into its bizarrely unhinged, “Untitled” conclusion.

Overall, Apollo Vermouth makes as little sense to me now as it did a year ago when the TOME caught wind of Psychic Youth Rally. And yet, I relate to and enjoy this record more than I did previous efforts, so there's that as well. Bottom line, there is a lot to love on Burning in Heaven, and if you're a fan of noise, ambient, or drone, you're bound to pick out a track or more here that really strokes your fur the way you like it.