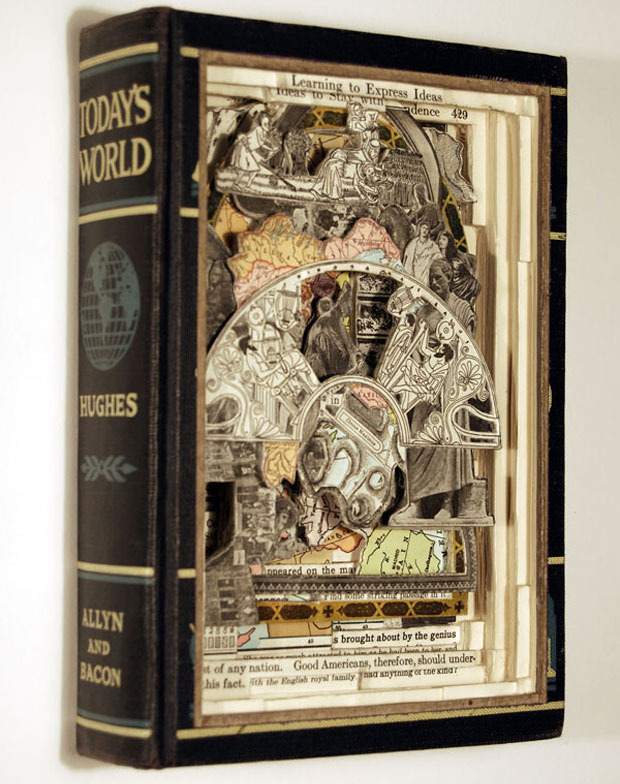 “Most of what I read now would be considered art, media and cultural theory or popular science,” says Brian Dettmer, the notorious man of knives and tweezers, painstakingly dissecting books. He operates encyclopedias, atlases, dictionaries, tapes and other media but vows to never use material without copies; “it would be a crime to alter or carve anything that is historically important and unique.” He emphasizes the underlying investigation of concepts of language and communication in his works, which indicate the constant loss of information as a result of everything shifting to the “digital realm”— a loss he doesn’t want to partake in.

“When I began working with books I was working with phone books and then single issues of encyclopedias that were orphaned from their sets in thrift stores. I wanted to work with material that was disposable or had no possibility of being functional.”

Lately, Dettmer has been creating pieces that resemble objects from a natural history museum, “as if it was a functional thing from a different time or culture that is now valued for its rich texture and history rather than for its communicative function or role in contemporary society.”

One of his most recent sculptures is the Smith’s Science Series, 2011, which he describes as “totem-like.” It’s an assembly of 10 books from the Smithsonian Scientific Series set, which can be viewed from every angle. The books fold into each other in a vertical scheme, escalating upwards. The subjects mix toward the center and advance from the top to bottom.

With e-books, iPads, the Internet in general, do you think prints and books will go obsolete in the near future?

I don’t think that the book will ever die. Painting never died, punk never died (but it did get old and sad), and books will never die but they will evolve. Certain types of books will certainly be rare if not nonexistent in the future. I think the book is the perfect format for the novel and other fiction, but as a reference tool, it has been passed-up by the Internet. We may not see encyclopedias, dictionaries and textbooks continuing in printed form. The content needs to be updated constantly and the structure of most information is non-linear. This is why the Internet works so well for certain types of information. The structure and nature of constant adaptation of the web is perfect for much of the reference information that used to be delegated to books but we also need to think about preservation and solidity. If everything is constantly updated we have no way of accessing the personal and cultural records from the past.

Would it help environmentally if books did grow obsolete?

Actually, I think the idea of the paperless world being more environmentally friendly is a myth. For current news that we get in disposable media like newspapers and magazines, it’s certainly more environmentally friendly to avoid print when possible but for a novel or any book that will be valued and used for years, it is much better to have it as a solid form that doesn’t rely on constant updates and isn’t dependent on the non-stop flow of energy to a device that has been designed to become extinct. Information in print is independent from the dependency on constant energy and the constant redesigning of electronic devises is motivated to perpetuate consumerism but is terrible for the environment. But any major company would like you to think otherwise because there is no profits in selling a book that will last centuries.

Does your sculpting lead to a new meaning of the books, or does it represent the original meaning?

It can go both ways. Sometimes new or hidden meanings are revealed and sometimes the original meaning becomes clearer in the singular image I leave the book with. I usually define an approach to the piece before I begin to work or early on in a piece and this tells me which way the meaning will shift, divert or grow.

Born in 1974, Dettmer studied at Columbia College in Chicago. There he focused more on painting before gradually moving towards sculpture. His works, however, have always explored ideas about language and communication. He is now based in Atlanta, Georgia, where he and his wife are far from the long winters. But he says he does miss the culture, architecture, and food of Chicago.