The making (of the artwork) of Horseback's Half Blood 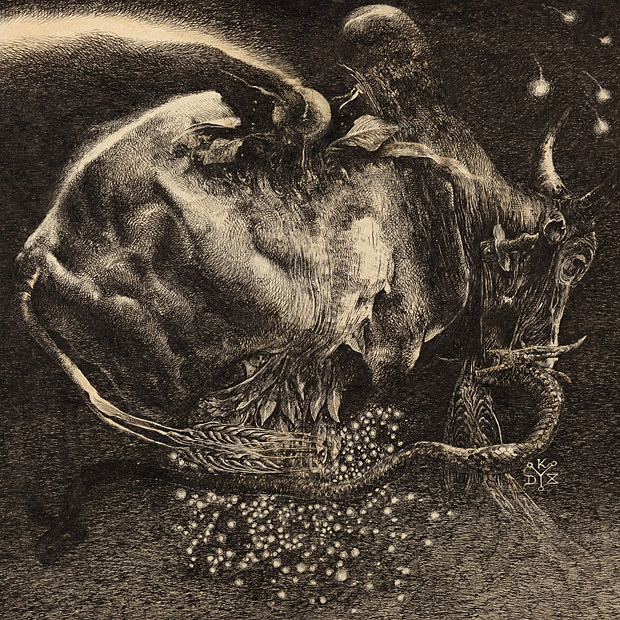 A couple of years ago Jenks Miller, inspired by the previous work I did for Horseback’s The Invisible Mountain album, got in touch and asked if I would agree to do art for a piece of music that had yet to be written. Jenks’s idea was to fuse the process of making music and creating visual art in order to come up with an ultimately organic result. This commission, indeed, turned into something very special.

Immediately upon receiving the initial brief and comments from Jenks and Keith Utech (a request to reflect dark and organic nature of music and to touch on subjects of hybridity and evolution in the drawing; but also introduce the idea of darkness with the promise of revelation, the divine duality) the image of tauroctony sprang to my mind.

The traditional tauroctony of the Roman Empire — the image of Mithras slaying the primal bull — is a symbolic scene dealing with subjects of transgression against one's nature (according to the myth, Mithras is reluctant about killing the beautiful creature but is forced to obey Akhuramazda/Jupiter's command), death and rebirth/new beginning (the slain bull's flesh turns into flora; the semen into fauna; the blood into a vine that bore fruits used to produce ceremonial wine, which induced higher revelation). Ahriman (the demon of chaos and destruction, Akhuramazda’s twin brother, who was bereft of all creative powers) having split himself into a scorpion, an ant and a snake attempts at corrupting the ritual offering by poisoning the bull's semen and — most importantly — its blood.

I felt that Mithraic Mysteries resonated with the subject at hand on a very profound level and pushed the initial ideas of the album much further. Still, I wasn’t going to suggest choosing the path of Mithraic tradition and follow it as worshippers. On the contrary, I wanted this beautiful mysticism to be taken as a starting point, a metaphor.

In my early sketches I focused on the subjects of murder (the arms and the dagger), rebirth (the bull's volatile transformation) and, above all, corruption (the stream of blood coming through the serpent's venomous teeth). The corruption was at the center of my composition, it hinted at the much sought-after religious revelation, which would only explain our spiritual imperfection, convey the ever-bitter taste of truth and verify humanity’s relation to Chaos. The pure stream of primal life (traditionally portrayed as ears of wheat) turned into a menacing hair-like substance of primal fear. The hope, distilled through generations of darkness, still promised salvation, but neither to us nor to our children. It would take us much wandering to win our attunement to the bull's free spirit back; mankind's Half Blood remained a forbidding threshold.

I should also point out that the composition idea quite elegantly echoed “The Moment of Truth” picture (the drawing had been commissioned by Utech Records for Horseback’s “The Invisible Mountain”): the killing, the fear and the passage of the creature being slain, the blood and, finally, the dagger.

Having thoroughly talked that direction over we decided to remove the hands and the figure of Mithras from the composition altogether. Moreover, I wanted to capture the feel of loneliness, even sadness, in this piece as Jenks included Middle-Eastern motifs in his music adorned with beautifully tragic overtones, so I went on and revised the initial setup in a rather dramatic way.

I did two different sketches this time as well. In both takes Mithras himself was hidden in a symbol (the Eye of Truth, the torch and the star). Both drawings focused on the bull's transformation and the corruption of blood. Of course, the dagger and the serpent couldn’t be removed from either take without ruining the subtle balance.

We all really liked the idea of the bull turning away from viewer in the fourth take as it successfully conveyed the feel of loneliness and disillusion, so I decided to keep the angle in the ink drawing. Essentially, the composition of the final ink & tea piece is an intricate combination of the last two sketches:

While still working on the ink drawing I started developing an ornamental composition, which would alloy all the basic elements of tauroctony into a compact image, a visual representation of Intent thus adding a ceremonial angle to the whole project. Here the drama literally unfolded from a curiously shaped sacrificial dagger: the bull’s head, the eye, the dagger and the serpent came crowned by the opening flower of Truth. Once again I brought forth mythological foundation for spiritual imperfection of humanity, the chaotic origins in every one of us.

The pastel piece serves as a companion to the cover drawing and I feel the bluish green here creates a wonderful visual parallel to Jenks’s atmospheric work.

About a year after submitting the image files to Horseback it became apparent that I had accumulated so much energy while working on “Half Blood” that it needed yet another outlet. I set on revisiting Mithraic Mysteries in a lithograph.

“Blood of a Poet” was printed at an ancient Moscow workshop and reflected the poetic nature of the myth. I aimed at balancing Logos and Mythos in a drawing and thus creating a resonating, “singing” artifact.

Here the poet’s immortal ghost smiles to her dreams of magick: sacrifices are never wasted, good songs are never forgotten.