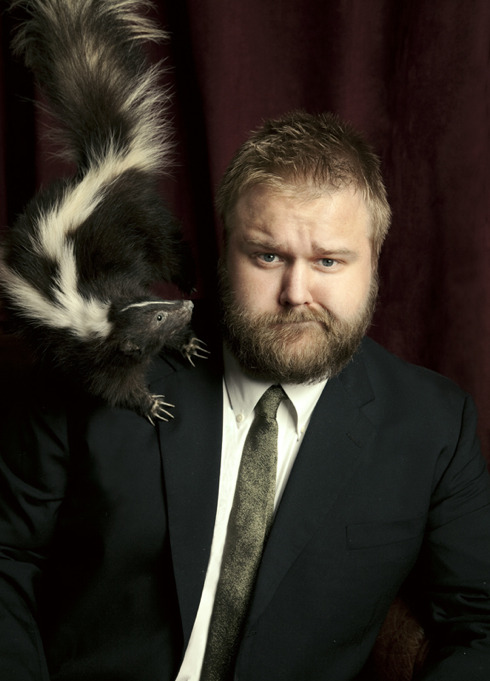 Hello and welcome to Seduction of the Innocent, a blog about the wonderful world of the BIFF! BANG! POW! and the pannapictagraphists who love it. Yes, this is a blog about comic books.

This week, we'll discuss some comments made by Walking Dead and Invincible creator Robert Kirkman in GQ.

The interesting part of the original statement you made about why people need to get away from doing the corporate thing, beyond the need for new characters and new books, is the idea that the audience for comics is aging, and that by sticking to work-for-hire projects, creators are contributing to the aging of that audience, and by extension the cultural irrelevance of comics in general. It seems like that was the most controversial part of that argument.

I think that's the most obvious part. When I was reading comics when I was 15, Superman didn't deal with rape so much, you know? There weren't a lot of dark elements to mainstream superhero comics. I think that it's pretty obvious that one of the things that's hurting comics is that the subject matter is so inappropriate for a mass audience. You know, Marvel just did an intercompany crossover which was supposed to be something all of their readers can read, and it had guys ripping each other in half and intestines were flying all over the place. That's the kind of thing that you would see in a Walking Dead comic. I don't want to see Spider-Man swinging around, tripping in intestines going, “Aw, crap! What a mess!” That's not the kind of thing that's going to get Billy down the street off of his Xbox. I think part of the problem is that the writers and artists that are doing these books want to write them for themselves, instead of for the audience they should be writing to. And I think that's a real problem.

Needless to say, I think he's wrong. I think the reason companies have crossovers where people get ripped in half (or get eaten by characters who aren't necessarily cannibals) is because the industry as a whole is trying to find what will get Billy down the street off his Xbox. Because there is almost no doubt that Billy is playing Grand Theft Auto or Left4Dead, and another superhero comic where the good guy always saves the day just isn't going to do it for him.

I do think that writers are writing for themselves, but I also think that most writers do that and I personally don't think they owe their audience more than putting together a well-thought out and entertaining story. Does some of the stuff in modern-day comics skew a little older? Yes. But it's well below the M rating on most video games.

I think part of the reason that Kirkman feels this way is because he failed rather miserably at writing characters that weren't his own. Because he felt that he had to rein himself in, he ultimately delivered probably the least satisfying story that has ever been written in Ultimate X-Men. (His only saving grace may be that he didn't write that abortion of an event they called “Ultimatum.”) That being said, the beginning of Kirkman's run on UXM was brilliant. He did prove that you could write entertaining all-ages comic books with enough subtle undertones of more adult themes that older readers could be engaged, but then he decided to end it all with Phoenix, in turn making his whole run moot. Hey Kirkman, you were preceded by Millar and Bendis. Their creator-owned stuff is pretty gruesome AND they were able to write a good “corporate” book. Maybe you're a just a little limited.

Kirkman's comments haven't made him a lot of friends in the industry, but the guy is living proof that creator-owned material can be profitable. What he discounts is all the writing that is done for specific audiences. Marvel and DC both have lines dedicated to aiming at younger readers. Although, it might be hard for a kid to find out they aren't reading “real” Spider-Man because it's not in continuity, there are even in continuity books that can get kids hooked. A personal favorite of mine (and I'm almost 22) is Lockjaw and the Pet Avengers. I think this might be the greatest example of a writer writing for himself. I mean, it's a book about a few superhero pets saving the world from Thanos. Don't believe it's great? Two words: Frog Thor.

Kirkman goes on to say that creator-owned material will continue to be more appealing for creators to write. Of course it is. It always will be unless you're the kind of guy (or girl) who can only write Spider-Man, in which case you shouldn't even be trying this in the first place. I have a feeling that corporate comics will continue to skew older until the day when publishers can honestly say that more kids are reading the material than older teenagers and adults. Lockjaw points towards a future but only (the) time (gem) will tell.