Getting unabashedly earnest: Talking with Lamp 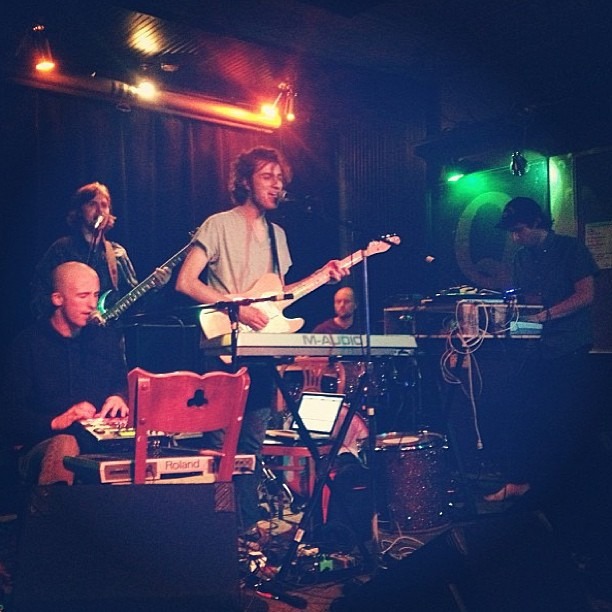 I was recently doored while biking through the fine, but narrow streets of Chicago, and as I lay on the gurney staring up at the impossibly clear gorgeous expansive Midwest sky all I could think was “fuck this city.” Chicago might not be the largest, tech savviest or even the most derelict but it still pulsates the way a city does, through highs and lows causing moments of pure joy and also straight-up misery in its inhabitants. It seemed fitting that somewhat prior to my moment of wretchedness I had experienced one of elation through a night of local music, something Chicago continually succeeds at.

Showcasing the night had been the quintet Lamp celebrating the release of their self-titled EP off of Chicago label Aerial Ballet. Lamp put on of the most intricate and cohesive live shows I had experienced in sometime, alternating between swirling synths and drums with smartly layered vocals and jazzy bass rifts. I was surprised upon sitting down with the group to find that their current line-up had only existed since January, with the addition of drummer Aaron Cauble, synth/keyboardist Abe Vucekovich, and bassist Maxwell Beckman to singer/guitarist David Curtin and singer/synthist Chris Ash two-piece.

One of the things that jump out about Lamp’s music is the duality of isolation and community focused on in their songs, which creatively displays the mode of life in the 21st century. One precariously balances between overwhelming social outlets and isolation. Keyboardist Vucekovich cites spirituality as one of the driving connections for the group. “We are a very spiritual bunch and really into doing everything, not just music […] It is not about them all the time, it’s about something more. It comes from a very spiritual place and unites us. Getting over and outside of us.” The ability to look outside the band is perhaps why Lamp exudes such an earnest independence to their genre shifting and layering style. While Lamp’s songs emit a looseness they are also carefully controlled as they bring themselves and the audience to a brink while also keeping things from tumbling over into utter nonsense. This loose control could come from how they view the musical project as an outlet but not the be all to end all. Drummer Cauble explains that while they make music a priority it is also held in balance with the rest of their lives and that not solely finding an identity in music allows for a sense of freedom.

Although music is not the only thing that connects or drives the band and their individual lives, it is clear it is something deeply rooted in their identity. “We have to play music, if we don’t we’ll explode or something. It comes from just a love of the music. It kind of intertwines with our beliefs” explains singer/guitarist Curtin. Their feverish earworm “Feel The Ghost” of their EP works as the musical metaphor to this exploding need for music. As sparkling crescendos build and crest over Ash's urgent singing of “Do you feel the Ghost or is he just a concept burning in your mind? I don’t want to be part of what the dead men say falling, falling in the ground.”

Lamp’s sincere lack of forcing creativity extends to group’s outlook on marketing. When asked about the use of social media within the group, a vehicle in which most contemporary bands use to expend their listenership, Ash explained they are not social media moguls in real-life and something they have struggled a bit with. “It kind of is just how the landscape is now but I think it is about finding ways on how to traverse that terrain without feeling like you are using people or doing something that is strange […] I think the media side of social media is cool. We are all into doing some video projects and art.” Curtin further explains their outlook, “I sort of have the belief, I don’t know if it is true, but if you’re music is available in a lot of places, you put it out and it is good enough it will get out.” Some people might view this as an overwhelmingly naïve outlook in a society where product and consumership is continually being poured down individuals throat through the funnel of advertisements in both the real and virtual but Lamp’s earnest wariness of marketing displays a growing trend of DIY creative outlets, be it music, art or film, getting back the source of real connection through balancing how and when to use technology and keeping principle on the front, not back burner.

Bandcamp is the main way the group has found to comfortably balance and traverse the terrain of being a band on the Internet as it allows them to share their music without having to worry about status updates or retweets. “It’s kind of cliché but we want the music to speak for itself.” Vucekovich chimes in with the perfect summation of what Lamp is, a juxtaposition of ardent inventiveness in a overwhelming consumer-driven society.

Lamp's new EP is available for purchase from their bandcamp. See them next at Chicago's Hideout August 15th.