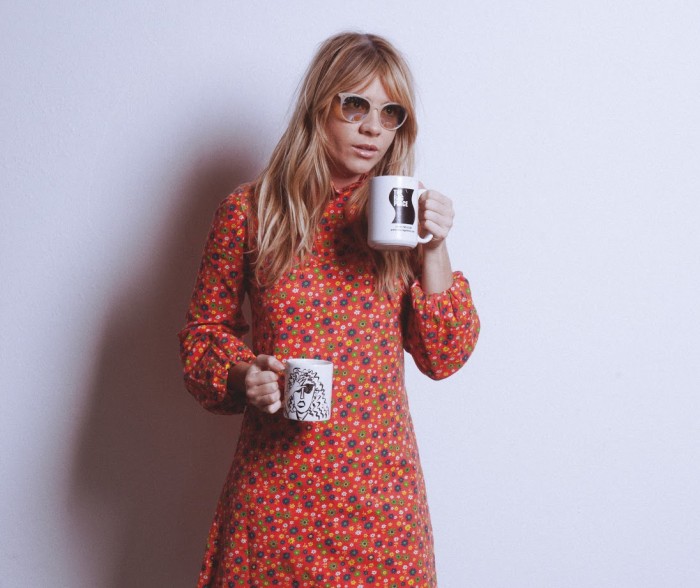 Gothic Tropic’s newest track, “Stronger”, is something we have been tapping our toes to for several days now. It’s got a summertime vibe that just can’t be denied, and we think it might be the season’s newest anthem. (But who are we to say?) Stream the track below, and check out what Cecilia Della Peruti (the brainchild of Gothic Tropic) herself had to say about her new music, dogs, and crazy tour stories.

If you could introduce yourself to our readers in any way possible–money not being a factor–how would you do so? When you said “money not being a factor” I immediately went to some kind of elaborate sound stage production with elephants, synchronized swimming, doves flocking out of trees and a samba line carrying me down a golden staircase, and other absurd and opulent examples of how I would misrepresent myself haha. In reality, I’m a person who’s been making music for a while, usually playing guitar or keys for other artists, out on the touring gig life, and more recently finished my debut album under Gothic Tropic.

How did you all get in-cahoots? Tell us the birthing story of “Gothic Tropic.”

I started GT about 5 years ago thinking it’d be my fun solo project where I’d be free to play and follow my writing impulses without consequence (the genre-hopping). Originally I was just playing guitar with a loop station, and singing periodically. I’d always considered myself a guitarist before vocalist, so honestly it’s always been a surprise when people find out I’ve been writing and playing all the guitar parts and solos. In the last year it’s turned into a more focused project, and I’ve been playing with Rheese Detrow (drums) for almost 2 years now. Brad Bowers (bass) came on early this year. Connor Sullivan on rhythm guitar and keys is the newest addition, just have had a couple shows with him. The lineup has changed so much because the past members had committed projects I respect that, so we’ve always just supported each others’ commitments, and played together when we can. I wrote and arranged everything before I met these guys, and they’ve done a really great job of adapting and playing the material, I’m really lucky to have these dudes!

Your new single “Stronger” is a far cry from–although equally as stunning as–your last release in 2015, titled “Puppet Master.” What shifted your sound from one track to the next?

I’m glad you’re not frustrated with it haha, I’ve gotten mixed feedback about that. I’ve been trying to narrow down my sound for a while, that’s the raw truth, it just took me a while to figure out where I fit and what suits me best. The problem lies in my taste, I’m into everything from Herbie Hancock to Black Sabbath and it’s been tough to reconcile. I need multiple outlets, and I’m only beginning to figure out how to focus the GT sound. But it will always combine my favorite elements, and I don’t think I’ll ever be able to restrain myself to one sound.

“Stronger” is quite the anthem, with a feel-good sound that can only be associated with summertime. What inspired the song, and what was the writing process like? (We read about it briefly on Noisey, but would love your take for our readers!)

It was the last song I wrote, so it’s the freshest! I’ve always had a “hurt puppy” response to rudeness or bullying. That quick recovery turned submissive turned seeking approval thing… It’s tolling! So — I’m not going to continue to play dumb to insulting behavior to spare the offender the embarrassment of being in the wrong, or god forbid be mistaken as “bitchy”. Judgements like that should be reserved for when someone is actually being rude, not when someone is standing up for one’s self, or merely stating facts. Women are constantly being mistakenly called names for simply requesting reasonable treatment, or for assigning responsibility to offenders. It’s absolutely absurd obviously, but you’d be surprised at how many people don’t actually realize it at his point in 2016. This song is about that.

Building off of that, what do you think of the current state of the music industry?

It’s really hard to generalize, because there are plenty of honored women. I also think everything should be judged on talent and merit, and not on a gender-centric rating system, and it’s truly hard to predict what the motivators are for either being welcomed or excluded. However there are those obvious situations. I’ve been told “you play guitar well for a girl”, and while it’s intended as a compliment, it’s incorrect to assume that women aren’t the professional players you see in insane album credits or on huge stages, because more often than not, they are (Wrecking Crew, Prince, Michael Jackson, Bruce Springsteen, Beyonce, etc). It’s getting better, and of course anyone with a good brain supports gender equality, and wants to see a balanced industry. Most people aren’t absolutely insane haha.

I’ll take you from a tour highlight, to pitiful tale. When I was playing with Børns, we covered Benny And The Jets, and I was on keys, so it was kind of on me to kill it. We were playing a festival in Norway, headliner Elton John, and I knew he was only a couple tents away behind stage, and could hear our set. I played the crap out of Benny And The Jets and I like to think I made him proud. Or maybe he couldn’t have cared less, I think that’s probably closer to reality, but whatever.

And now for the pitiful tale; this is a story about a show Gothic Tropic played in Connecticut. One thing you should know is that I don’t have a booking agent, and with that comes the ability to play for the sound guy and make a total of $10 sometimes. It was one of those horrible sad shows, and I was so discouraged that I kicked over a trash can haha. GT has yet to really do a full on US tour to be honest! I’ve booked a million west coast tours, and one east coast tour. More soon!

The improvised jams and solos. There’s about one every 3 or 4 songs in a given set, so those are my favorite parts. I like to stop singing, and really play guitar and get lost in the moment and let everyone gel and flex their skills. We’re always on the same page luckily, they’re extremely good players so we can usually predict the changes and shifts in dynamic.

Do you have a favorite music venue to play?

It’s hard to say, I really like the newer LA venues like Resident and Hi-Hat. Bootleg Theater will always have my heart also, I think the sound at Bootleg is one of the best out of the smaller LA venues.

We’ve read quite a few, very creative, takes on your sound. If you could describe your sound, how would you do so?

There might be some contrast between what I hope to sound like and what I actually sound like. I like to think I hear some Chrissie Hynde vocally and a humble blend of Richard Lloyd (Television) and David Williams (pocket funk legend) on guitar. The songwriting is a little harder to pin point but I hope it sounds classic, unique, and memorable.

Who is your favorite superhero?

I think I like Hulk. When he Hulks out, he just becomes a wad of meat crushing everything in his path. He’s the personification of the ultimate temper. And Bruce Banner is the socially withdrawn sexy-smart physicist. Do I have a crush on Ruffalo’s Banner? Maybe.

Dogs all the way. Dogs assault you with love usually, I like that. I like when people do that too. I’m deathly allergic to cats but somehow cats love me. I think that makes cats kinda messed up, I don’t like to play games lol.

What’s up next for Gothic Tropic?

I don’t knowwww maaaayyyn it’s alllll likeee hope for the bessstt… Well what I do know is, I’m releasing singles for the rest of the summer off Old Flame Records. Also shooting some music videos. We’re doing one for Stronger this weekend and I’m really excited for that, I learned how to ride a motorcycle for it! Just mainly hoping to book a support tour, go out on the road, and then release the album in early fall. This is mainly a one-woman operation, so I’m constantly discovering new challenges and hurdles, as one does as an independent artist. I’m working incredibly hard, and that’s all anyone can do.