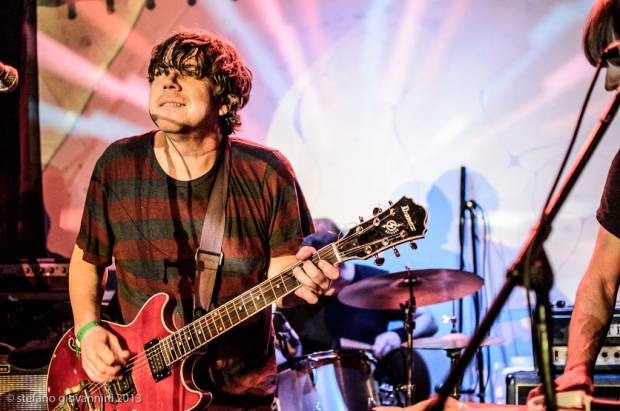 Much has been mythologized and said about that mystical time in 1990 when John Terlesky was reborn and rechristened by rock journalist Byron Coley as the great and powerful, Brother JT. The man who emerged from Easton, Pennsylvania to once bring us Original Sins premieres the new songs, “Celebrate Your Face”, that opens JT's forthcoming album The Svelteness of Boogietude from Thrill Jockey along with the exclusive non-album cut, “Hey Zwinkee!”. A dandy in his own psychedelic underworld, the good Brother celebrates the spirit of late 70s Marc Bolan like a faith healing minister as the leader of his own “T. Rex Blues” tent revival. Finding a new home at Thrill Jockey, the “Buick Mackane” house of worship descendant is also currently working on a “children's” book-in-progress for grown ups billed as, “A Continuing Tale for Adult Children” called Nob Jonni and the Girl From Space available in chapters on his Tumblr.

Opening up The Svelteness of Boogietude, Brother JT reminds you to “Celebrate Your Face” because “it's the only one you got” shaking fists, clapping hands, with pre-80s glam reminding you to love your looks with, “celebrate it, emancipate it, elevate it, but don't you ever hate it”, and to “take a day off and spend some time with the little man inside the man”.

The Boogietude begins with the electric Free to Be… You and Me dipped celebrations of visage with the following sung opening statement. “Well you are who you are 'cause they made you who you are, you are, you really are…and I am what I am, what I am, 'cause they made me what I am, God damn, I really am”. “Celebrate Your Face” is the epitome of the classic album rock opener, loosening up your head where the electric JT warrior takes on the world, “'cause this world is neither yours, or neither mine, we just live there” and rides the Marshall stack skronk like a mechanical monster swan. The Brother JT approach to classic rock revisionism burns like the brightest Bolan star with lyrics like, “let's make a pact, to do away with, every day, yeah” like a baby boomerang firing forward into the cosmos before returning backwards like a spaceball retro-ricochet.

Switching on the big bass electrics and big bopping deep synth dishes; the good Brother keeps the mood and pitch slowed down and strange in the oddball ode outtake premiere of, “Hey Zwinkee!”

The boogie glows with high voltage and things get weird as we are introduced to the funky “tan on tan, spick and span” femme-futile, “Zwinkee”. Showing us what she's got, we take inventory of her “baby fat, ankle tat, her sweatpants say 'juicy”, reminiscent of New Jersey tanning salon enthusiasts or the yoga-marm class of self involved Jeggings wearers. Not be confused with the Zwinky avatars, the Southern syrup vocals and Southwest twang subtleties paint the picture of self-entitled eccentricism of a city slicking debutante who's going to get her way and “never have to pay”. After the Brother JT croaks his piece and preaches his teachings, he keeps the fuzz effects buzzing in analog waves that invite the guitar wah-wah finale freakout that many contemporary trends of today have forgotten and forgone.

The Svelteness of Boogietude will be available May 14 from Thrill Jockey.