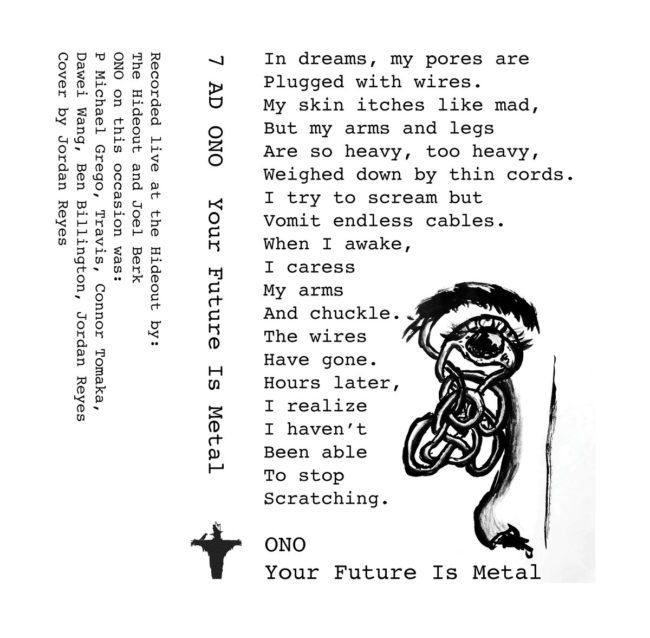 Chicago legends ONO need no introduction, but just in case, the eclectic, ever shapeshifting bunch has been playing their one-of-a-kind brand of industrial gospel funk since 1980. And there is no slowing down, no loss of freneticism, as is made apparent by their forthcoming live cassette, Your Future Is Metal, out August 24 via American Damage. The band’s incomparable live show (on their home turf at The Hideout), filled with noise and soul, humor and darkness, is captured on tape, like lighting in a bottle. The second track in the set, “Travis Wax Madonna,” offers a glimpse at their raucous energy.

You’re dropped into an ongoing of sea of overlapping noise and percussive chuckling. Feedback and melodic rumblings battle back and forth as founding vocalist Travis Travis Travis bellows a thundering, operatic sermon. You’re asked to wait as the track tapes its shape, a defined structure slowly emerging from a deep and tangled thicket of sounds. It churns mechanically into a full-blown rocker and by the song’s end, a dance has started and it cannot stop, no.

The only thing better would be to see the spectacle, and if you HAVE seen ONO, you can picture it. If you haven’t? …dang. Well, Brooklyn’s a couple of chances to see them this weekend. They play:

A Deer A Horse, Language, ESSi & alouette Played Trans Pecos
Impose Main
Check Out (And Consider Contributing to) the Kickstarter for The Rat
Tweets by @IMPOSEMAGAZINE
[instagram-feed num=6 showfollow=false]