Thank You say you're welcome 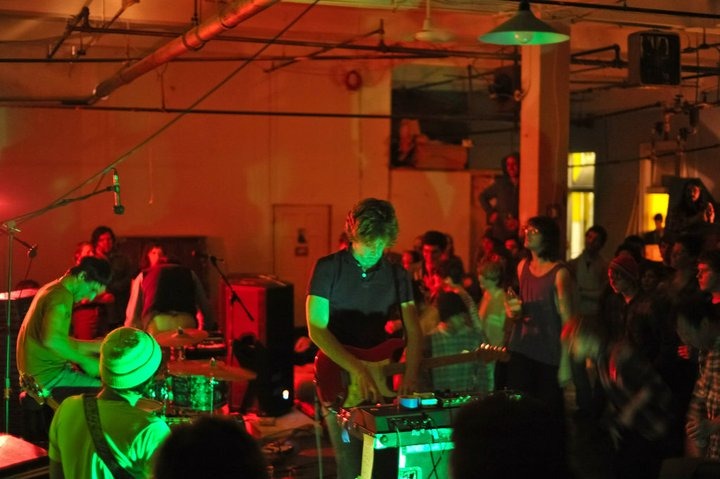 There have been a few major casualties this year within Baltimore’s music scene, starting with Ponytail and Double Dagger. A third perennial live force announces it’s departure today as Thank You will play it’s last U.S. show this weekend in Baltimore, and it’s final show this December on a European tour.

In conversation yesterday, band founder Jeff McGrath admitted that Thank You’s G Spot show with Oxes this Saturday and their forthcoming European tour will be their last of a six year run. The band is set to play their final show at ATP’s Nightmare Before Christmas at the invitation of former tour mates, Battles.
Jeff explains, “It sort of just feels like we’re moving out of an apartment.” A few weeks ago William Cashion of Future Islands asked Thank You if they wanted to join them for a January tour. When the band got together to discuss William’s proposal, it became evident to everyone that not all of the members still enjoyed touring or had the will to continue to do so.
Each of Thank You’s LPs since their days with original drummer Elke Wardlaw have been hand-crafted with a strong ode to their live performance. First and foremost, Thank You is very much a live band. Without this component, all four current members couldn’t envision moving forward under the same moniker. Jeff was quick to point out that they’ll all remain best friends, they all plan to stay living in Baltimore, and that they all plan to continue making music – just with different friends and artists. This makes sense, especially when considering the musical cycle currently occurring in Baltimore.
Since Whartscape’s conclusion, a number of pivotal bands in Baltimore’s music scene have disbanded. Besides geography, a few other similarities link together these break-ups. They were executed positively, brought on by pure motives, and instilled the core values of friendship. None involved ill wills, hefty egos, or tugs at fame. They occurred because either the band wanted to go out on top, or because it’s members creativity would flourish more within separate entities.
To the casual bystander, Baltimore’s music scene may appear to have a few holes. However, a closer look reveals at least ten other willing and eager bands for every disbanded group of heroes. Though Whartscape and a handful of its pioneers may have retired their household names, there remains a thriving community that's arguably even stronger than ever.
Pivotol bands might break up, but their members tend to start or join new projects with other friends in town. Jeff McGrath put it rather simply yesterday, “The nature of this city is friendliness.” In a music scene that relies heavily upon a tight-knit community, it’s important to say thank you to friends that help continue its evolution.
Thank You has one final release in store; details are forthcoming.
PrevPreviousThe most average releases of October 2011
NextRoll the Dice, “Iron Bridge”Next