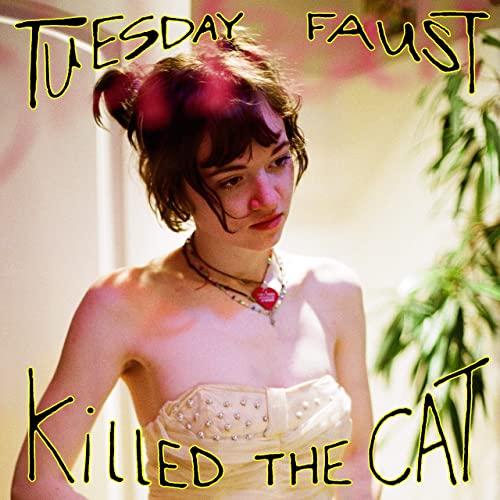 Tuesday Faust is a rising singer-songwriter from Portland who crafts dreamy, folk-tinged indie rock with a poignant bite. She excels in combining whimsical, noisy jangle pop elements with deeply personal and melancholic lyrical imagery akin to Elliot Smith and Conor Oberst – as exemplified by her fuzzy and propulsive recent single “Sorry.” Today, Impose is thrilled to premiere her spirited debut album Killed The Cat in full before officially dropping on Saturday.

Killed The Cat is a fully-formed debut – a reflective collection of tracks that runs the full gamut of emotions. “If it’s raining ice outside / I guess I’ll pay the price, it’s fine / And if it’s raining fire / That’ll just make things exciting,” she croons softly on opener “Riding Over (Dying),” just one of the many vivid turns of phrase Tuesday lets fly on this record. On the catchy “Paul,” lush acoustic melodies and jangly pulsating rhythms buoy lyrics concerning romantic longing and strife. From there the album oscillates between simmering emo-folk ballads (“Grace,” “Bruises”) and noisier uptempo rock jams (“Claudia”) while always maintaining that sense of brutal honesty in her songwriting. It’s a stunning introduction to one of Portland’s best kept secrets, who of course will be less of a secret once this LP gains traction.

“…Killed The Cat is not about your cat. It seems to be about unrequited loves, running away with your best friend, half-assed apologies, cartoonish torture, and high school revenge,” her bio reads. You can stream it below: