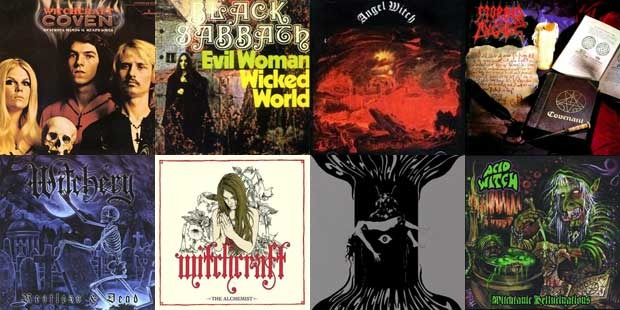 Bands with “witch” in
their name are only a fraction of metal’s obsession with the occult and
women—song titles, lyrics, or general imagery are countless alone. We
all know the long love metal has had for the occult, but I am curious as
to why such a male-dominated scene has long been fascinated with a
historically female entity.

Those without experience within or knowledge
of metal may view it as possessing little respect for femininity, and
certain subgenres do embrace this stance, but with the exception of this
division lies a strange longing for a particular sort of woman. Witches
have been defined as some of the following:

“One that is credited with
usually malignant supernatural powers, especially a woman practicing
usually black witchcraft often with the aid of a devil or familiar,” “A
charming or alluring girl or woman,” “An old ugly woman.”

The vision of
each may vary, but their power remains, whether in desire or fear. The
associations between witchcraft and evil, certainly the most dominant of
metal themes, makes me wonder if witches are only present as the
supposed incarnation of evil in the female form. Is it just that witches
are safe to sing about because they are the believed to be the most
sinister of women, and therefore acceptable among men who believe
themselves to be the most sinister? Is a woman who is not a witch sung
about only in the ways of sex and not idolatry, with exceptions such as
Elizabeth Bathory?

As I am no scholar, who better to use
as research experts than men in metal? I asked
several guys heavily invested to consider what the preoccupation may
stem from, what it may mean, and what it says about women.

“I think it’s
because evil dudes like evil chicks, and it’s cool imagery. Also, you’re
gonna sing about chicks, and if you don’t want to sound like Van Halen,
it’s gonna be about witches.”

“The witch, especially
in her darkest, ugliest incarnations is the quintessential occult
female figure, and there have to be at least a few chicks invited to
this sausage fest. Furthermore, the witch's mythos offers as diverse
collection of traits as the countless subgenres found in metal. Be it
the forest-dwelling, ritualistic nature of black metal, the
fantasy-laden magical elements of classic/power metal, or the
spell-casting, slime soaked psychedelia of stoner and doom, there is an
element of the witch to be found throughout.”

“Cause witches
are hot and dudes like tits, magic, and evil.”

“Dudes are
obsessed with the premise of a woman having “powers” over them.
Traditionally, man's desire to be dominated and controlled by a female
has been psychologically repressed and hidden behind an entity with MAGIC
abilities do to so.”

“It's sexy, it's unknown
to us, its dark and it lures us in. It's got a little bit of everything
a guy wants, especially a metalhead. When I think of the word witch, I
don’t think of the childhood Halloween imagery, I think of a sultry,
more charismatic figure.”

“Not enough metal
does. Fuck that gore metal, it should be about witches, pagans, forests,
etc. Stuff that really scares coward Christians and normals. Think about
metalheads in the past; outcasts and shit; everyone else is partying,
they are creeping around the woods, doing things to bum people out,
using religion to really scare people. Imagine seeing Pentagram in the
70s—you’d have to be so badass to even know they were playing. With
regards to what it says about males and females in metal, go back to the
beginning, when dudes in metal bands weren’t getting any kind of girls.
I guess worshipping powerful females was their contact with a woman
they could relate to.”

A female friend also suggested that the term “witch” is loosely used these days, not taken as seriously as it had for bands starting out in the 60’s when occult topics were starting to be heavily explored. Or perhaps as a vicarious outlet for the men writing these songs, in that while they may identify with the concept, the surface of actual witchcraft is only scratched, not its true meanings.

At least most metal has some respect for it. Ask the average person what their opinion or vision of witchcraft may be, and they’ll probably resort to discussing Wicca. The terminology is safer and more accepted as a belief and practice. Do you think one is more inclined to take someone seriously who is self-described as a “witch” or a “Wiccan”? And yet, never in my life have I encountered someone in metal who has said anything but “witch” in serious conversation. There’s no need to dodge the most well known term, to try and evolve it into something more widely accepted. Every metalhead I know personally has a certain reverence for the history and practice of witchcraft. While it may not be the most finely articulated point (witches have boobs! cool!), they are still able to delve further into the identity of the witch and her effect on the male psyche. To this day, the continuing stream of band names, lyrical content, and imagery show no sign of the decline of the witch in metal.

PrevPreviousBest Fwends release Meltdown Mixtape
NextBL§§D ØU† gets screwed, and not in the ironic wayNext