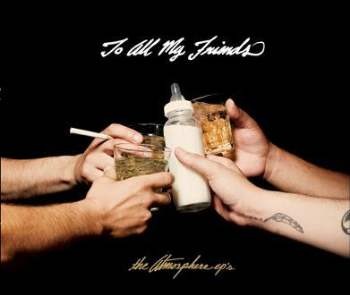 With the To All My Friends tour days away from launching, it was expected that Atmosphere would drop a new EP at least, considering its last record was (*gasp) in '08.

The To All My Friends EP will be a double EP, which to my working knowledge has not been done before, nor can I say I comprehend the format (or this a return to the Lucy Ford format?). The relief is that Atmosphere is a trustworthy group that rarely makes brash decisions with its releases. “Freefalling” is the first single off the EP. It rides a country twang slide guitar that gives Slug the prompt to tell his down-n-out tales. It's far from Slick Rick story-telling, but it's also not a Tom Petty jack move.

“Freefalling” has a similar vibe previously explored on “The Rooster” from the Sad Clown Bad Fall 10 EP with its countrified influence. Delivering a message that sometimes our problems are good problems to have, Slug puts it into perspective that even though we hate our bosses or our homeboys hollering at our girlfriends, there's plenty of envious ones that would scoop up our job or our girl if we gave them up for such petty beefs – life lessons, yo!

The To All My Friends, Blood Makes The Blade Holy – The Atmosphere EPs is out September 7 digitally on Rhymesayers and available on tour or through Fifth Element.