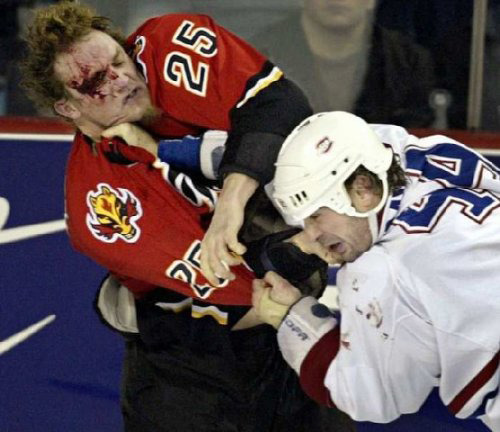 Blood in the streets of Williamsburg! Nathan Williams and Jared Swilley enter a bar, and only one leaves without a bloody face.

FIGHT! Black Lips opened for Yo La Tengo at Roseland Ballroom, at the same time Wavves played Market Hotel in Bushwick for Todd P. Somehow, all parties ended up at Daddy's in the wee hours of the morning, “Jailbreak” Thin Lizzy came on the jukebox, a pint glass fell to the floor, and shit went down.

Our pal Pop Jew reports via her Twtter:

What happened next? Not too sure, but we can only hope Black Lips didn't call in a favor to their friends from Staten Island, and suddenly, Nathan Williams finds his nuts on a dresser, and one of The Black Lips comes out with a spiked bat…

We were partying pretty hard, and as always seems to happen, the party moved to Daddy's after everything was settled up. Daddy's was packed and the remnants of the Beets (welcome home, boys!) show at Dead Herring (happy birthday Cathy!) and the Black Lips show [at Roseland Ballroom (they opened for Yo La Tengo)] also had migrated to the ever popular “hot spot”. Star Studded scene to the maxxxx, if you like slightly “important” indie rockers.

Now, I didn't see exactly how the fight happened, but I had heard the gossip a few months back about Jared (from Black Lips) talking shit about Nathan on the Internet. Pitchfork went as far as to wonder if Nathan and Jared would have a confrontation when they both played this summer's p4k fest in Chicago. Needless to say, that didn't happen.

Well, I suppose last night was the perfect storm. I didn't see the beginning, but I did see people dragging Nathan and Jared apart, and then Jared and a popular DJ running at Nathan again, spilling beer all over everyone (including me), and punches being thrown. The lights at Daddy's were turned on, the cops showed up, but Jared and the chick were not ready to stop fighting and were even trying to fight other people outside the bar. Jared was bloody. Nathan was fine. Insane. Weirdest indie rock moment I've experienced.

Nathan Williams has released a statement regarding the altercation:

Talking shit about me on the Internet is one thing. I can handle that all day, but when some dude is just looking for a fight at four in the morning talking shit to my face and his girlfriend is spitting in the face of all my friends, it's a whole different story. I have no problem with Black Lips or anybody else that I haven't met, but Jared has been at me every chance he had. I just want to play music and have fun. It was unfortunate that it escalated to that point but he got what was coming to him.

PrevPreviousDark revelation about the Wolf King of L.A.
NextGreg Cartwright is here to take his scene backNext