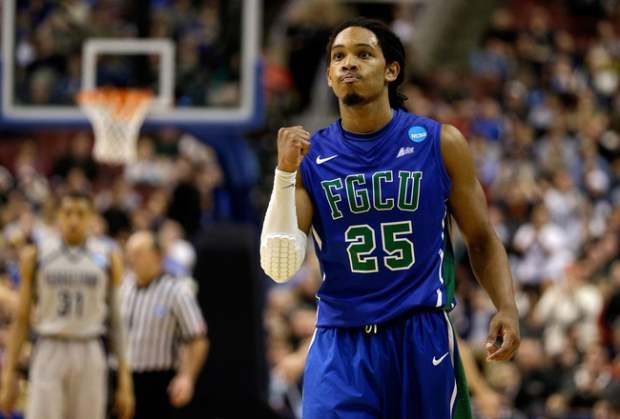 I picked Pitt to win a game or two. You know why? Their jerseys read: Pitt. If I was from an opposing school, Wichita State or something, and if I had to go against Pitt I would be nervous. I would think, “Oh good, we're going to play Pitt. They don't have the beautiful training facilities that we have. They strengthen themselves with railroad ties and sandbags. Pitt, they subsist on a diet of raw eggs and the dreams of the proletariat.”

Pitt was squashed in the first round. No matter the aural pleasure of Pitt, they are pretty average. The rest of my bracket followed suit. Red text and red lines dashing away any hopes I had at appearing knowledgeable about something as stupid as college basketball.

It's funny how it all works. There are two ways, really, with an infinite amount of grey area in between to fill out a bracket, but they all get you to the same place. Sometimes you'll fancy yourself a nascent Bracketologist, other times you'll give yourself up to the God of Chance. His name's Carl.

I went into this year's bracket coming to terms with the fact that I know very little of college basketball. In fact, I know very little of basketball. If my only exposure to the sport was limited to random fourth quarters, Ricky Rubio sound bytes, and DeAndre Jordan fart videos I'd be cool with that. That said, I made most of my picks based on what I wanted to happen (Elite 8 matchups of IU vs. Butler, Wisconsin vs. Ohio State, St. Louis cruising on the ghost of Majerus) rather than what appeared likely.

When I started plummeting in the rankings, my ego began to bruise. I had to send emails to friends, loved ones. I had to explain that I'm not that dumb, really, I just picked Wisconsin because of the kid with jump-shot freethrow. No matter how we fill out our brackets, it hurts us when we fail. We lunge to rationalize what is happening. It's probably a good example of how humans treat anything, really; the desire to appear knowledgeable, in control of a bunch of meaningless crap and then the backtracking and headscratching when it all goes pear-shaped.

Where are we? We've pared it down to sixteen teams. Already, two coaches have been fired despite, by most accounts, being above-average coaches. Marshall Henderson is no longer in the tournament, but FGCU is, and they might be a decent family friendly substitute. And most importantly, my Final Four is still intact (Ohio State, IU, Kansas, Michigan State).

The Hoosiers are good, but not to be trusted. The state of Michigan is collectively killing it. Duke is still in the tournament, but no one cares. Aaron Craft should have been called for a blocking foul, but that doesn't decide the game. These are things we all know. We've got a few days’ rest until some 19 and 20 year-olds blow up the rest of our brackets and cause us more stress than seems logical.