I gotta say, Kevin Harvick is “The Man” 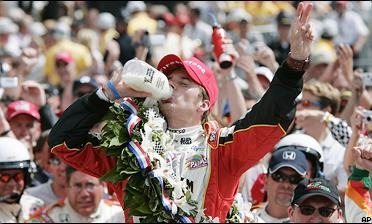 This weekend was one of the biggest days in auto racing in America… The Indy 500. Yes, I tried to watch, and even though the drivers are mostly very good looking, it just doesn't seem like open-wheel racing to me if I don't hear British announcers saying the phrase “into the chicane” every few minutes. I watched the first 100 laps or so but just couldn't get into it so I went out to enjoy Memorial Sunday like a real American: drinking beers in the park and drinking beers at a barbecue. Either way, I hope Dan Wheldon enjoyed his buttermilk.

Now I must admit: I didn't watch the race from beginning to end. C'mon, Green Flag was at 6pm on Memorial Day weekend, and I'm young and vibrant and have parties to attend and boys to flirt with while wearing cute summer outfits, you know what I'm saying? So I kept up on twitter, rejoicing when the 18 took the lead, and cursing loudly at my Blackberry when Kyle wrecked and had to go to the garage.

Luckily though, a well-timed allergic reaction sent me home early, and I ended up back at my house just in time for the last 10 laps of the race, and man, they could not have been more exciting. Kyle may have been out of it, but watching Dale Earnhardt Jr take the lead during the Green-White-Checker, hearing Junior Nation erupt in joy with the excitement of his winless streak coming to an end, and then seeing him start to slow as he ran out of fuel, while Kevin Harvick, “Mister Where Did He Come From?” snuck to the front of the field just before the finish, man it was incredible.

Still as breathtaking to re-watch, Kevin Harvick has been on fire this season with no sign of slowing down. Seriously, this is the clip I'll show the haters who say “how can you like NASCAR” from now on. Just crazy stuff. I think Jimmie Johnson summed it up best on Twitter (Re-Tweeted here by the Closer himself):

I said it a few weeks ago, but at this point if you read the NASCAR news, the headlines are all Harvick and Kyle Busch.., and I hope it stays that way.