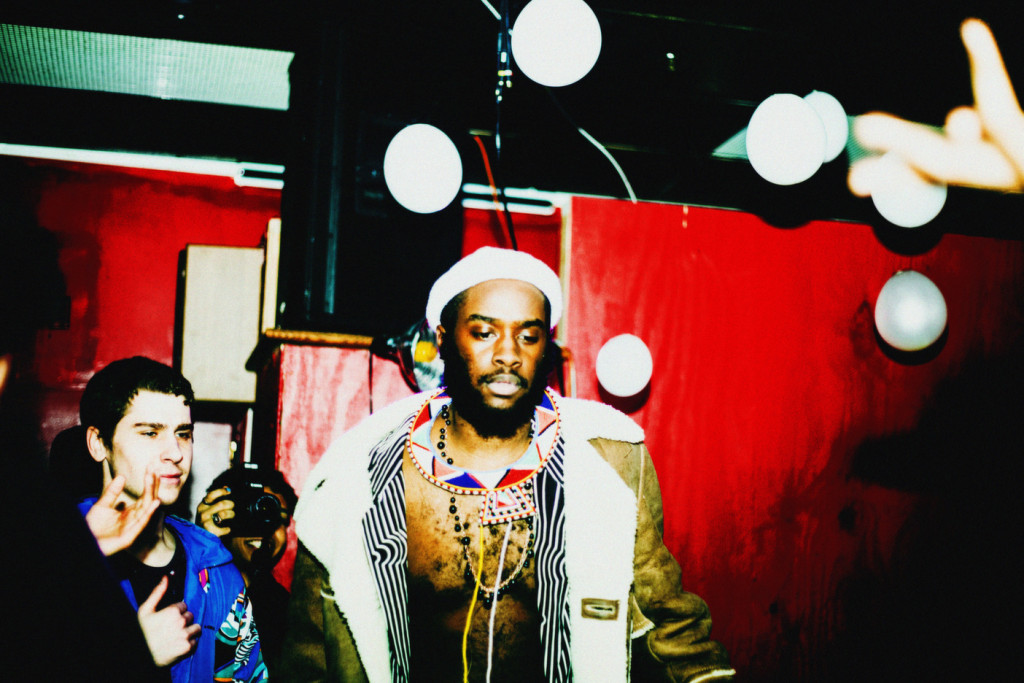 One of the most political acts I saw in Baltimore in 2015 wasnʼt at City Hall, in the courts, or even in the streets.

It was in the club.

After Marylandʼs governor declared a State of Emergency and Baltimoreʼs mayor instituted a curfew in the spring of that year, artist Abdu Ali took the stage at an early show at The Crown, a venue in the heart of the city. Many things about his and othersʼ performances have stuck in my (and othersʼ) memory, but none quite so much as his banger “I, Exist”.

Recorded well before Freddie Grayʼs April death in police custody, the track begins with and repeats the mantra, “Time donʼt exist/When it rain like this” in a call-and-response
with, “But I exist/When it rain like this.” In a climate of daily exposure to the mass erasure of people of color in multiple ways (which resulted in repeated and varied narrative corrections, in which Ali himself has been vocal), celebrating personhood outside of the imposed context of the curfew was revolutionary.

Months later, dozens of police officers amassed outside Baltimore City Hall. They formed lines around paddy wagons and building entrances, while a group of exhausted bystanders waited to see their friends and family as members of the press scuttled around. Negotiations inside had gone on for hours, with all compromises rejected by those occupying the building and demanding to meet with then-interim Police Commissioner Kevin Davis. Roughly half of those inside left freely over the course of the night. Police officers eventually moved in and made arrests. Cameras flashed and people cried out as officers marched leaders of the demonstration outside and placed them in police vans and cars. One officer in the police line around the vehicles wore a patch on his vest that showed a black and white American flag with a single blue line for one of its stripes. A white skull depicting comic book vigilante and critic of due process The Punisher sat in the middle of the flag. Through the window of a departing patrol car, a young arrestee held up her fingers to bystanders in a specific sequence. It was her motherʼs phone number. She was a minor.

If weʼre going to continue to fuck with this false dichotomy of good and evil, rather than seeing all of our lives as the result of centuries of systemic injustice, weʼre going to need more than one hero.

This was the end of a small, peaceful sit-in aimed at airing grievances related to methods of policing in Baltimore. Officers took sixteen people, three of them minors, into custody for allegedly trespassing. They had denied the protesters water and use of bathrooms for hours, before relenting and apparently allowing the demonstration to continue unabated. Activists announced that they would not leave until they could discuss their demands, released in advance of Davisʼ appointment hearing, with the interim commissioner himself. In response, police forces grew to a size that outnumbered protesters, journalists, and legal observers. Some officers did not wear badges or name tags, limiting their accountability in whatever situation may have arisen.

The structure of superhero narratives has superseded those of complicated, intersectional stories for decades in the United States. Rhetoric inevitably casts the good guys, bad guys, and inept in-betweens who divide the formerʼs crusade against the latter. As the Freddie Gray case progressed from Grayʼs April death in police custody to the respective trials of the six officers charged with varying degrees of involvement in it, defense lawyers have worried aloud about an officerʼs potential conviction casting them as a “sacrificial lamb” and have repeatedly used words like “retribution” and “vengeance” to describe the behavior of the prosecution and protesters alike. Though the defense has repeatedly accused the prosecution of waging a public relations war in the media, it has also relied heavily on symbolic language.

Symbols have weighed heavily in policing news of the last eight months. Before a pro-police rally this summer, which was attended largely by friends and family members of police officers living in the counties surrounding Baltimore, organizers explicitly asked that attendees eschew firearms and Confederate flags to avoid making distracting, auxiliary statements.

Months before officersʼ fatal detainment of Freddie Gray in Baltimore, NYPD was using a scene from Road House to teach its officers how to “…be nice, until itʼs time to not be nice.” Spoiler alert, but Road House ends with a bunch of vigilantes shooting the filmʼs villain to make room for Patrick Swayzeʼs heroism after he himself kills a bunch of the cast to preserve his American right to kick ass. Then, in the winking denouement of the film, everyone with a shot gun exchanges shit-eating grins while agreeing not to snitch to the cops.

The United States does, of course, have celebrated vigilantes. George Zimmerman, who killed Trayvon Martin and was subsequently found innocent of his murder; former Officer Darren Wilson, who described teenager Michael Brown as “Hulk Hogan” after shooting and killing him; Donald Trump, the mainstream circusʼ postmodern Bruce Wayne and Joker rolled into one, who receives Nazi salutes at rallies where his supporters have beaten black people. These are people endorsed by the criminal justice system, cycled through popular media, and paid in the sort of privilege that was purchased during North Americaʼs initial colonization. Theyʼre the personification of our cultural ideals of fight-first masculinity having reached their local conclusions, and yet they still need more blood.

During a pre-trial hearing, of the defense attorneys for Ofc. William Porter asked a detective to clarify whether the police department was a “paramilitary” organization before the prosecution raised an objection.

So, really, what is the social construct of a cop in a place like the United States?

Some view the concept of an officer as a heroic figure, a soldier in the “war on drugs”. Following this metaphor raises some questions: If many so-called ordinary citizens raise objections to the behavior of a police force comprised mostly of folks not living inside Baltimore, while other citizens treat that force as a sort of military organization, isnʼt that force effectively holding an occupation itself? And, if it is indeed occupying Baltimore, doesnʼt that make whoever allows them to continue abuses, both alleged and ruled, a cooperator?

Additionally, if police officers are heroes, they require an origin story. Without their badges, saturated bills of rights, and weapons, police officers generally begin as “ordinary” citizens. Many of them begin their lives in working class conditions. But the laws they enforce are usually enacted by wealthy, powerful individuals with heavy backing from community elites. They police low-income areas at higher rates than wealthy areas, maintaining safe spaces for the same economic class that ultimately decides the circumstances under which they enforce laws. Itʼs no surprise, then, that policing in the Unites States originated in the relationship between poor whites and blacks established following the Civil War. Wealthy elites afforded greater
rights to whites while legally (because, well, they either made the laws or financially influenced what the laws were) oppressing their recently freed black counterparts,
subsequently cauterizing alliances between sharecroppers of different races.

Symbols have weighed heavily in policing news of the last eight months.

As protests associated with the Black Lives Matter movement have continued, the metaphors invoked to describe the circumstances of protests must be parsed. If weʼre going to continue to fuck with this false dichotomy of good and evil, rather than seeing all of our lives as the result of centuries of systemic injustice, weʼre going to need more than one hero.

Abdu Aliʼs “I Exist” is not an explicitly political track, except that it is. We live in a post-industrial society whose information generally disseminates via metaphor and doublespeak. In such a system, dominant culture inevitably finds the clarity of purpose expressed by a continued, intersectional movement difficult to digest, because itʼs an expression that doesnʼt first exist to be consumed.

So, the first complaint of an elite class, when addressed by dissenting voices, is that those voices become more polite, that they must change their language to assume the language of formal power, that they must exist less to speak to each other and more to entertain those used to being in charge.

When Abdu Ali keeps asserting his life’s inherent value, and the almost casually infinite space it occupies (“I’m the pyramids/I’m the clouds/I’m the sun”) then sings that he’s “living forever” he seems to reject constituting a single identity at one (or any) time, making the song especially perfect for the time of his May performance. In the midst of all these violent symbols of (heteronormative, cis, white) masculinity, Ali was there declaring himself a “banjee king queen” while a crowd of crying people danced around him. When the idea of simply being is cathartic for some people more than others, not assuming an ability to dictate terms of expression might be the least those outside of that experience can do.