Ava Luna at the Hideaway 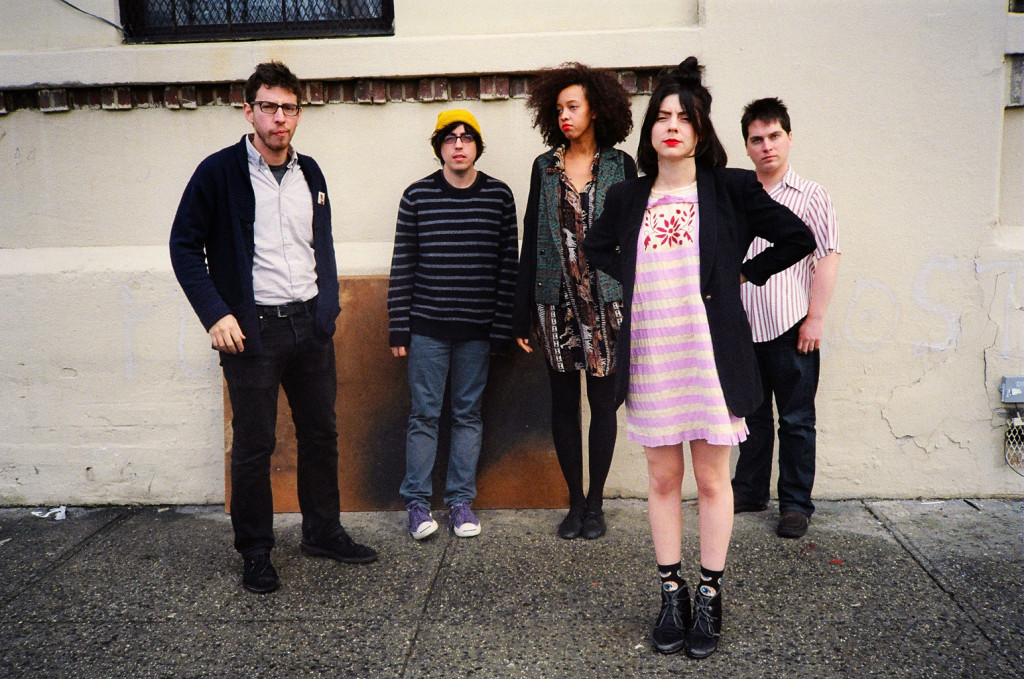 “Wherever we go, we’re the assholes.” I’m at Bushwick safe-haven Happy Fun Hideaway with Ava Luna’s Carlos Hernandez and Julian Fader, where we’re drinking hot toddies and complimentary cans of Tecate, a sign that not everyone would agree with Hernandez’s dismal assessment.

The malignance that he refers to isn’t a personal thing, though. It’s their music that makes them that way, or so he explains.

“It’s kind of a tired complaint. ‘Oh we’re too experimental for pop or too pop.’ You know, that’s kind of a copout, so I don’t like going around saying that. But sometimes it really slaps you in the face,” Hernandez tells me at the wood-paneled bar. “We were playing at the Apollo Theater the other day, for instance, and we were paired with this very pretty, but very traditional singer-songwriter. And there we were, we had a noise freakout at the end of set, and it was like ‘Oh God, here we are, the assholes at this show doing noisy stuff.’ Whereas about a month ago we played the closing of Clocktower Gallery, so we were on the bill with Dan Friel, Greg Fox, and Ashcan Orchestra, and in that case it was like ‘I’m the asshole who’s playing actual songs.’”

When I first arrived at the bar, Fader was sitting with two pals he’d run into, members of Celestial Shore and Zula, and it seems that the musicians have friends everywhere, though Fader suggests there might be a reason behind the band’s split personality disorder.
“When you’re Carlos Hernandez, people just get up and go when you walk into the room,” Fader told me observantly as the fellow musicians sitting with him bid us farewell just as Carlos joined us. They lovingly call this the “Carlos effect.”

Our conversation at Happy Funny Hideaway comes only a couple days before the five-piece is scheduled to head on tour in support of their raucous new LP, Electric Balloon. Fader and Hernandez are quick to note how different the process of writing this album has been from their rookie release, Ice Level. What has evolved from a collective carousel of interchangeable parts that later solidified itself with a line-up of seven, now stands today at a shaved-down modest five-piece. With more room to breathe, the former “composition project” has been easily toppled, and just as easily put back together with the pieces rearranged.

Rewind to 2011. From the back of Boston’s Paradise Rock Club with my arms crossed, drink in hand, I turn to my friend and ask, “Where the hell are these guys?” I’m referring to the only obstacle keeping me from hearing Unknown Mortal Orchestra and Toro y Moi: the then-unknown-to-me Ava Luna. As the crowd began to join in my weariness, in walks the seven members of Ava Luna, pushing through the crowd, instruments in hands. With little distinction between the frantic shuffle of a quick setup and that of their stage moves, clamor subsided and the crowd, confused and ready to dance, melted into the spastic tripped-out Motown stylings of Ava Luna.

“I’d say it’s very different. It’s working with a band instead of working as a person. It was also seven people back then, which makes it almost impossible personnel-wise to collaborate, too many voices,” Hernandez tells me back at the bar, nearly three years on.

“The previous record, Ice Level, was a composition by me and I think this one was much more of a group effort,” says Hernandez. “It was sort of trying to intentionally get away from the stringent structured nature of the previous one, you know? So some of the songs are in the model of it, they’re written and arranged, but other ones are really just spur of the moment, literally written on the spot as we’re coming up with them. Some of them are just loops or grooves, something we never experimented with before. It’s like a door we were afraid to open before. It was a self-conscious thing, where it’s like, it’s a little bit indulgent to build a song on groove.”

There was no shortage of ideas to build upon when writing Electric Balloon. Becca Kauffman and Felicia Douglass thrived in their role as glorified backup singers on the debut LP but have now emerged as their own musical forces. Each of the singers has come to embrace a different side of Ava Luna. Kauffman takes the lead on tracks like “Sears Roebuck M&Ms,” in which she throws her voice high and lowm creating a song that I would confuse for the sleep-deprived jittery art-rock of Guerrilla Toss if I didn’t know better. To contrast, Douglass takes charge on tracks like “PRPL,” (a song actually written with Hernandez asleep in the other room of the studio) showcasing the band getting down to some buttery smooth NYC basement-soul.

“If you go back and back to the first EPs we did, the lineup and sound were based on this concept. It was an experiment, the idea of getting rid of all instruments. The only instruments were Nathan’s synth and the drums with the vocal harmonies. So it really started actually as a sonic experiment first and foremost where the vocal harmonies were key elements,” says Hernandez. “But over time, as we introduced other sounds and became less of a concept and more of a real band, it became a little less relevant. Now we have songs with no vocal harmonies at all. The more new stuff we work on now, the more their parts are becoming more integrated—where it’s not a singer and backup vocalist now, it’s kind of three independent voices, three true crystalline voices that can have a real conversation and weave in and out.”

“It’s crazy, I didn’t even think about that. All these songs have three people singing on them at the same time,” Fader remarks after taking a moment to let Hernandez’s statement settle in.

As more and more responsibility has begun to fall in hands other than Hernandez’s, a former musical composition student at Columbia, opportunity has come for the band to go outside their comfort zone, doing things more simply.

“It’s almost more of an experiment in a sense, even though the music ends up sounding more down-to-earth, and a little bit more aesthetically accessible. I think it’s more experimental in the sense that we were really trying things we’ve never done or been comfortable doing,” Hernandez explains.

That sentiment is a hot topic with Fader’s mother, who shows up frequently in interviews.

“Now I’m talking about my mom again, but I was on with her the other day, and I actually hung up on her, I got mad at her. She was like I’m going to give you an honest critique of your show at the Apollo and I was like ‘all right, all right,’ and she basically started down a list of what her issues were,” Fader rehashed. “She did say the new album was easier than the old one though.”

This newfound appeal can be pinned down to many things, but most apparent is the duo’s time spent at their day jobs. The two cut records together over at The Silent Barn in Bushwick under the name Gravesend Recordings. They get to pick the brains and analyze deeply the songs of bands they select and greatly respect, drawing influence and ideas every time they work.

Confident in their practice, Fader and Hernandez convinced the rest of Ava Luna to record Electric Balloon independently this time around, avoiding a repeat of a heated debate that occurred before Ice Level, one that resulted in giving recording duties to another engineer. However, the band jumped at the opportunity to have half their songs mixed by Felicia’s father, the legendary producer, Jimmy Douglass.

“He’s kind of like an a-list mixing engineer. It’s kind of incongruous in a way. We literally recorded it with janky broken mics in someone’s house and then brought it to a world-class mixing engineer who’s worked with Aaliyah and Justin Timberlake to mix our essentially shitty bedroom recordings,” Hernandez says.

“It wasn’t shitty! He’s just being self-deprecating,” Fader says in rebuttal in a tone that suggests that the coworkers and bandmates spend a bit too much time together. “The recordings sounded good going into mixing and I was ready to mix it, but then we had this opportunity, and he was awesome. He did some stuff we would have never thought of doing. On “Daydream”, there’s this crazy flange thing that happens. It’s like a cheesy 80s effect, and at first we were totally off put by it, but then we thought about taking it out and we said it can’t come out.”

However excited they may be about the album, Ava Luna doesn’t take much time to revel in accomplishments. After this tour, they plan on being home for three weeks, in which time they plan to start recording another new album, which is close to being complete. After that they head overseas to play a string of shows in Europe. Jumping the gun, I ask what the next album after Electric Balloon might sound like.

“We shouldn’t talk about that album. It’s a secret. I’m really excited,” Hernandez tells me, holding back a desire to spill his guts about his latest set of creations.

“You’ll never believe which aging, formerly famous rock star they got to sing background vocals! We’re getting real cynical. I love being cynical about all this stuff though. It’s really just a defense mechanism for protecting the music,” Hernandez says. “I was so happy to make this album. I think it came out great; it was such a joy to work on it. I feel like were a much different and better band now and I feel that’ll come across in the shows we play. It’s good, I feel good about being a musician right now.”

Ava Luna's Electric Balloon is out now on Western Vinyl.