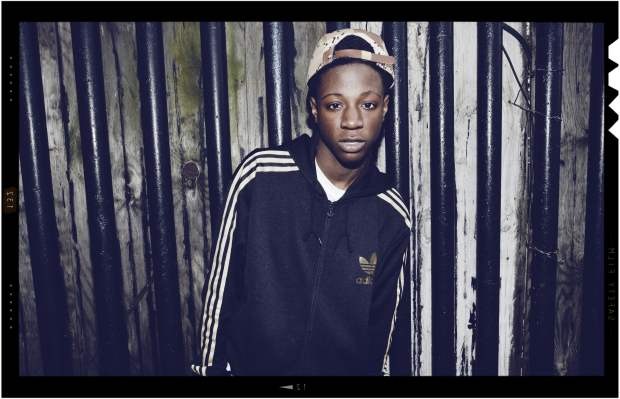 Hip hop producer 9th Wonder has a sharp ear, which he put to proper use when he compared rising Brooklyn MC Joey Bada$$ to a young MF Doom (then known as Zev Love X of KMD) in an interview with XXL. Listen to KMD's “Get U Now” and follow it up with Joey Bada$$ and Capital STEEZ's “Survival Tactics” if you need further proof of the style similarities or direct your ears towards “World Domination”, in which Bada$$ raps over Doom's “Datura Stramonium”. In the summer before his senior year of high school, Joey Bada$$ is being hailed as the nastiest young rapper since the Queensbridge poet set things off at the BBQ.

He'll spend his summer vacation on the Smoker's Club One Hazy Summer tour with the likes of Juicy J, Smoke DZA, Chip Tha Ripper, and his Pro.Era crew. We rang Bada$$ a few months back to discuss his upcoming 1999 mixtape, the signifiance of the year for him, and gather his thoughts on the educational system.

What’s the significance of naming your mixtape after the year 1999.

You know how they refer to the 90s as the golden age of hip hop? Well really, the concept behind it is referring to the last year of the golden age. It’s like a last hope kind of thing.

Would you say you’re a traditionalist in that way?

This is just the music I like to make. It’s not even to say I don’t like what’s going on in hip hop right now. I do like a couple things, like A$AP [Rocky]. So, I wouldn’t really say a traditionalist, since those guys tend to bash all the other music.

Could you see yourself, down the line, making something in that cloud rap style?

In the future, it may get more experimental. Golden age type of sound is not always what I made. I just kind of came across it one day and it was me. I knew it was what I needed to do because I loved the way it came out. I won’t say that songs like what A$AP is doing will never come from me. I do me at the end of the day. But it’s not like for the rest of my life I’m going to do boom bap.

Did you work with any producers on 1999?

Most of the shit on 1999 right now is not really original. I found producers on Youtube like Madlib, Premier, Pete Rock.

Some of these songs are around a year old. Where’s your head at these days in comparison to when you recorded a song like “Waves”?

My mentality overall, I would say, based on people’s reactions is mature. But, that’s just the way I make my music. That’s just the way it comes out. I’m living life. I look everyday as an opportunity to get experience points up, like some Call Of Duty type shit. At end of the day, I’m growing up. I’m still young and life really hasn’t started for me yet. I take my time when I make my music because there’s not really much to talk about as far as life goes. I don’t really know anything about that.

It takes maturity to even recognize that. How did you get linked up with Cinematic Group? You’re already getting representation by a company that houses Big K.R.I.T. and Smoke DZA.

Over a year ago I had this freestyle video that got on World Star [Hip Hop], and I had put my contact information at the end. I was like 15. [Johnny Shipes] seen that and he hit me up, so we’ve been working together for over a year now.

So this was 2010 right? How long had you been rhyming?

Not to be phony or anything, but since I was born. I picked it up early like I remember being two years old singing Biggie’s “Hypnotize”. That was the first song I ever memorized. I knew the whole thing. When I grow up and I come back and listening to the lyrics, it’s like “daamn this is what I was singing as a little baby and shit?”

You were singing about people’s daughters being tied up in basements.

It’s crazy, right? I didn’t know any better. It just came on the radio and it was my favorite song. From then, I truly fell in love with the craft and got into rapping.

When you sit down to write who are the big influences that got you motivated?

Well myself number one. The people I’m around, the people in my camp, and inspiration from dope artists comes from Nas and Jay-Z, Biggie, Big L, Tupac… the list goes on. Daft Punk is even one of my big inspirations. I think down the line, you’ll see me getting into some funky genres. I make beats and that’s the type of beats I make. I fuse funk with hip hop. You’ll see that from me eventually.

Do you have plans to use the summer as a chance to focus on music?

I’m going on tour with Big K.R.I.T [Ed's note: Big K.R.I.T. is not on the One Hazy Summer Tour]. this summer. I’m going with him the whole summer. Actually I’m trying not to fuck up this school to the point I have to go to summer school. That’s shit going to be my ass.

That’s the motivation to do homework right now?

The more success I gain, the more I progress, the more I don’t do my school work. It’s funny. You’d think it’s an inspiration for me to get it done, but it’s the total opposite.

We’ve been preparing a group tape called PEEP. We’re trying to drop that by June [Ed's note: This interview was conducted in April. It is unlikely PEEP will be out in June]. We was working on that before the Seccs Tape. The way it all fell into, was that Valentine’s Day came, I had this idea in my head and we just went for it. We did that whole tape in like two days.So, we’re working on a bigger one to drop this summer.

Obviously the temptation to call this an east coast Odd Future is there. How do you feel about the comparison?

I mean from the jump, I mean, firstly I like Odd Future. But, we’re not them. We’re Pro.Era. We don’t even look at it like that. I respect their whole shit. We’re us. They’re them. Yeah, I skate from time to time. I used to skate more when I was younger, but I don’t really trick and shit. I use my board to get me from point A to point B.

Once you graduate, if the music is still going strong, do you see yourself continuing music over higher education?

It depends on where I’m at by the time I finish school. I’ve had a great start. It’s kind of inevitable to say that it will be even better by the time I graduate school. By then, I hope to be in a good position where I don’t have to seek further education.

Honestly, I don’t really want to do it because I think the system is fucked up. I feel like college isn’t for me. There’s practice courses in college that you have to pay for that give you no credit just to pay for another course that will give you the credit; just paying for education sounds dumb to me. That shit is retarded.

I feel like it’s a waste of time and money. There’s other ways to educate yourself other than college. I don’t mean to sound ignorant, but we have Google [laughs]. Anything you can find in them textbooks, you can find on Google. Anything.