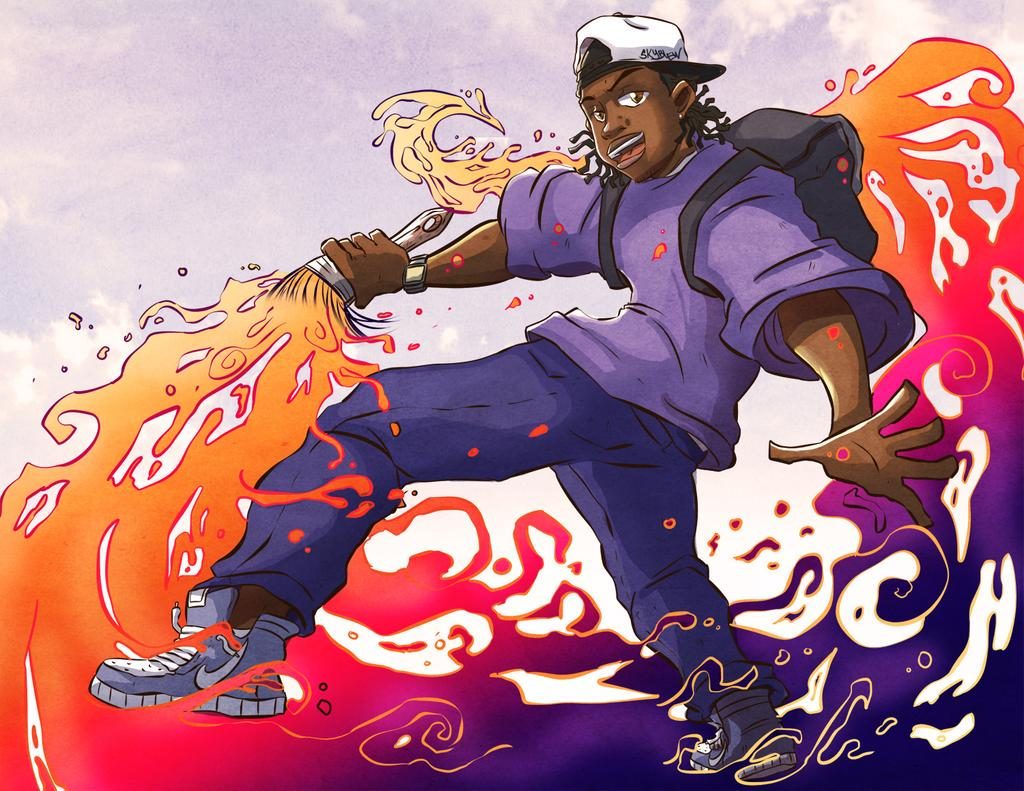 When you listen to Skyblew’s work, you aren’t just hearing it. You see vivid colors and shapes that are beautiful and calming, an effect that’s enhanced by the artwork on each of his albums and mixtapes. If you are familiar with certain cartoons, Japanese anime, or video games, catching their references just adds to the fun. Throughout all of this, Skyblew raps, sounding like a good friend giving helpful advice and comfort.

This is what I experience every time I listen to Skyblew’s music, especially on his recently released EP Destined: The Rebirth. I sat down recently with the North Carolina based rapper after I listened to his new EP because I love his music. It helped that he loved talking about it as much as I loved listening to it.

What inspired your new EP Destined: The Rebirth?

Well, I would have to say it was inspired by my metaphorical “Rebirth”. I took a 5 month hiatus from music at the end of last year after I wanted to quit music and life in general. I took some time away to re-evaluate things, to see if I really wanted to do this and if it was my calling. I knew I was really good at it and it’s a dream of mine, but sometimes things don’t go according to our plans, so I was questioning that. During that time, I received IMMENSE amounts of support from my TRUE supporters, friends and family. My family and supporters were sending me page long emails explaining to me why my music is important to them and what impact it had on their lives. It was truly inspiring. I knew I made music to inspire but sometimes you need a little assurance that it’s actually doing what you imagined it would. Far as my TRUE friends, family and loved ones, they were just in my corner every step of the way. Over time I realized what I knew the whole time which is, I’m destined to do this. This is my calling… This EP was a sample of the results from that period and & what I got from it.

Your motto is “I don’t rap, I paint the skyblew!” How does your music live by that?

When I came up with that slogan, it was based off the response I was getting from my music early on. People would tell me that my music takes them to another place & they can visualize my stories. From there, I came up with the concept of not “rapping” but actually doing something bigger and that’s creating beautiful pictures for the world, something people can not only visualize, but FEEL deep within their souls… We’re living in some crazy times right now and it’s only getting worse, so people need to sometimes just hear somebody say “it’s gonna be alright”…. When those skies turn grey, I want people to play my music and it brings back the blue skies. Metaphorically and literally. “Painting The Sky,Blew” is something you can get lost in when you want to escape the problems of the world. You can drift off into the soundscapes and let all the worries go.

In your current and past works, you discuss your experiences with depression, foster care, and grief. How did you turn these painful topics into comforting songs like “My Dream DeLIGHT” and “Flowers”?

I would have to say, I just pour my heart on songs like that. Coming from a person who has been through some of the most painful and heartbreaking situations in life, all I would think about during those times, is getting through it. There’s people out there who has been or are still going through similar circumstances, who are ready to end it all. I just want to be a voice for them and let them know, things will be alright. The rain doesn’t lasts long, you can get through it; I did.To most, turning pain into comfort is practically impossible, but when I write those songs, I channel the hurt as a way of liberation and defeating it once again in order to help someone out there do the same thing.

The production on your music combines nerdcore hip-hop, jazz, and old-school R&B. Who have been your biggest musical influences?

As far as my musical influences, my influences are: Common, 2Pac (RIP), A Tribe Called Quest (RIP Phife), Nujabes (RIP), Lupe Fiasco, Arrested Development, Scapegoat Wax, Blue Scholars, New Radicals, Jamiroquai, Common Market, Amy Winehouse, Marvin Gaye, Mega Ran, Michael Jackson, Sugar Ray, Sublime, J. Cole, Anita Baker, Nappy Roots. Yea I told you, it was a pretty diverse group lol But they are all great artists and if some of you reading this aren’t familiar with some of those names, let me put you on game lol. Check them out, real music indeed!

What cartoons, anime, and video games have helped you paint the Skyblew?

I won’t name the ones I like because that would take a whole interview by itself, but, I’ll name the ones only that played a major part in my life. The cartoons that played a big impact in my life are: Hey Arnold! (I made a whole album explaining why lol), Charlie Brown (movies, shows etc), Courage The Cowardly Dog, Doug, The Wild Thornberries, Rocko’s Modern Life, Rocket Power, As Told By Ginger, Foster’s Home Of Imaginary Friends.  Anime series: Dragon Ball Z, Yu Yu Hakusho, Cowboy Bebop, Naruto, Air Gear, Shin Chan. Video games: Jet Set Radio Future, Super Mario World, Donkey Kong 64, Pokemon (Emerald, Gold, Sapphire), Teenage Mutant Ninja Turtles: Turtles In Time, The Legend Of Zelda: Ocarina Of Time & Majora’s Mask, Final Fantasy 7.

What projects or appearances can we expect in the future?

I want to answer this so bad in details. I can’t say too much about one certain project; just know it’s special and may or may not be coming this year. It’s gonna be some of my best music, that’s all I’m going to say. Besides that, I got an EP coming out with Chillhop records, and a handful of collaborations are releasing that I’m part & I’m pretty excited about!  I’ll be doing a run of shows this fall with some VERY special guests, that’s the only clue I can give for now. Then, I’m planning a solo tour, so look out for that.