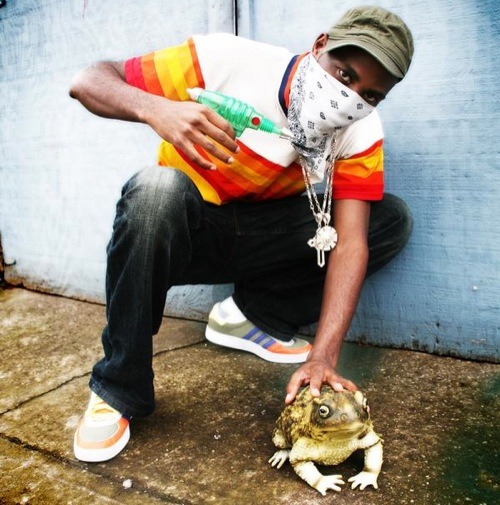 In hip hop, you have great MCs and you have great producers. When you can find an individual that steps into both roles with an equal amount of skill, consider yourself lucky. Normally there’s a 70/30 split (60/40, if you’re being overly democratic). Ohmega Watts is one of the fortunate few who can bless microphones and drum pads alike. Whether he’s contributing guest vocals for The Bamboos, remixing tracks for artists like Mr. J. Medeiros, or making music with his Lightheaded crew, instrumentals are always left better than he found them. This is precisely what will earn Watts Happening a place on many year-end top ten lists. His second solo album for Ubiquity Records, it reminds you that hip hop can still be fun.

Milton Campbell was born and raised in Brooklyn, New York. His college education brought him to Florida, but his surroundings left much to be desired. “I wanted to either move back to New York or be in the Bay Area,” Campbell says. While down in Florida, he crossed paths with Braille, an MC that Ohmega hit it off with creatively. “Seems like anything we’d be planning to do, we’d get it done,” he says. After a trip to Portland, Oregon to work with Braille, Campbell transplanted himself to the West Coast. “The last six years of my life have been in Portland,” he continues. “While it’s smaller than New York or Chicago or L.A., there’s a lot of potential here. It has its own unique vibe. People are open to different things, but you still have your cliques. You’ve got those who are into the backpacker stuff and those who are more into a gangster type vibe, and they’re not gonna stray from what they already know. There are pockets instead of a unified scene.”

An album like Watts Happening has the potential to break through those divisions. To call it well-rounded is the understatement of the year. There’s the party-rocking boom bap of “What’s It Worth” and “Eyes And Ears.” There’s the social observation of “No Delay” and “Model Citizen.” Ohmega’s own life lessons are revealed in “Memory Lane” and “Found.” Even more compelling are the selections that transcend hip hop, such as “Adaptacao” featuring vocalist Tita Lima, bringing a new school Brazilian bump to the party. The samba shuffle of “Saywhayusay” continues the globe-trekking groove, unfolding into a break-driven funk fest. The percussive punches are brought to an apex via the Afrobeat-inspired “Platypus Strut,” assisted by musicians from Breakestra and Antibalas. Sequencing is key to its presentation, and the album’s layout strikes the perfect balance of beats and rhymes for the mind, body, and soul.

If you’re wondering where such inspiration comes from, take a listen to “Dedicated,” where Campbell’s roll call of MCs and producers touches upon everyone from the Native Tongues and Diggin’ In The Crates to Quantic, Shawn Lee, and Mark Ronson. Lightheaded, a group he created with Braille and MC Othello, represents on “Roc The Bells.” Prior to their solo efforts, the trio recorded two albums together. “We’re working on a third,” Campbell reveals, “but life happens, you know? Othello got married and Braille has a wife and daughter. We intend to get it done, it’s just a matter of getting everyone in the same space to do so.” Inspiration also comes from his primary source of income: freelance art design. “Music is the other side of my artistic ability. When I’m not doing one, I’m doing the other, and they both inform each other.”

One of the album’s strongest collaborations is “Are You Satisfied,” featuring legendary songstress Sugar Pie DeSanto. “That song was written specifically for her,” Campbell beams, explaining the song’s origins. “I had heard about the fire at her home. She lost her husband in that fire along with a lot of her possessions. She’s an amazing woman and I got really inspired by her story. So I thought instead of paying money to get a sample cleared, let’s do something brand new. The song asks a simple question: can you still be satisfied with the hand you’re dealt and move on?” DeSanto’s vocals are impeccably delivered, evoking the spirit of one who has weathered the storms of life and lived to tell about it. The loving instruction is evident in her voice as she sings, “The skies are the limit, love it, leave it – it’s up to you. No matter the storm, keep faith in God and He’ll pull you through.”

Perhaps what makes Ohmega Watts so effective as an MC is that he picks and chooses his moments to speak wisely. The potency of his production is undeniable (hence the bonus instrumental disc included with the album), but his words convey a comfortable balance between message music and creating a party vibe, not seeing a need to forsake one for the other. “I like producing more than I like rhyming,” he admits, “so when it comes time for me to rhyme, I wanna have something to say. I know how impressionable kids are. It’s cool to have a vibe, but what’s up with saying something on a record? I know MCs wanna flex and show skill, but I don’t need to hear about how dope you are on every song. Matter of fact, don’t tell me how dope you are, period. Let me tell you how dope you are.”