Our Favorite Sets From SXSW 2022 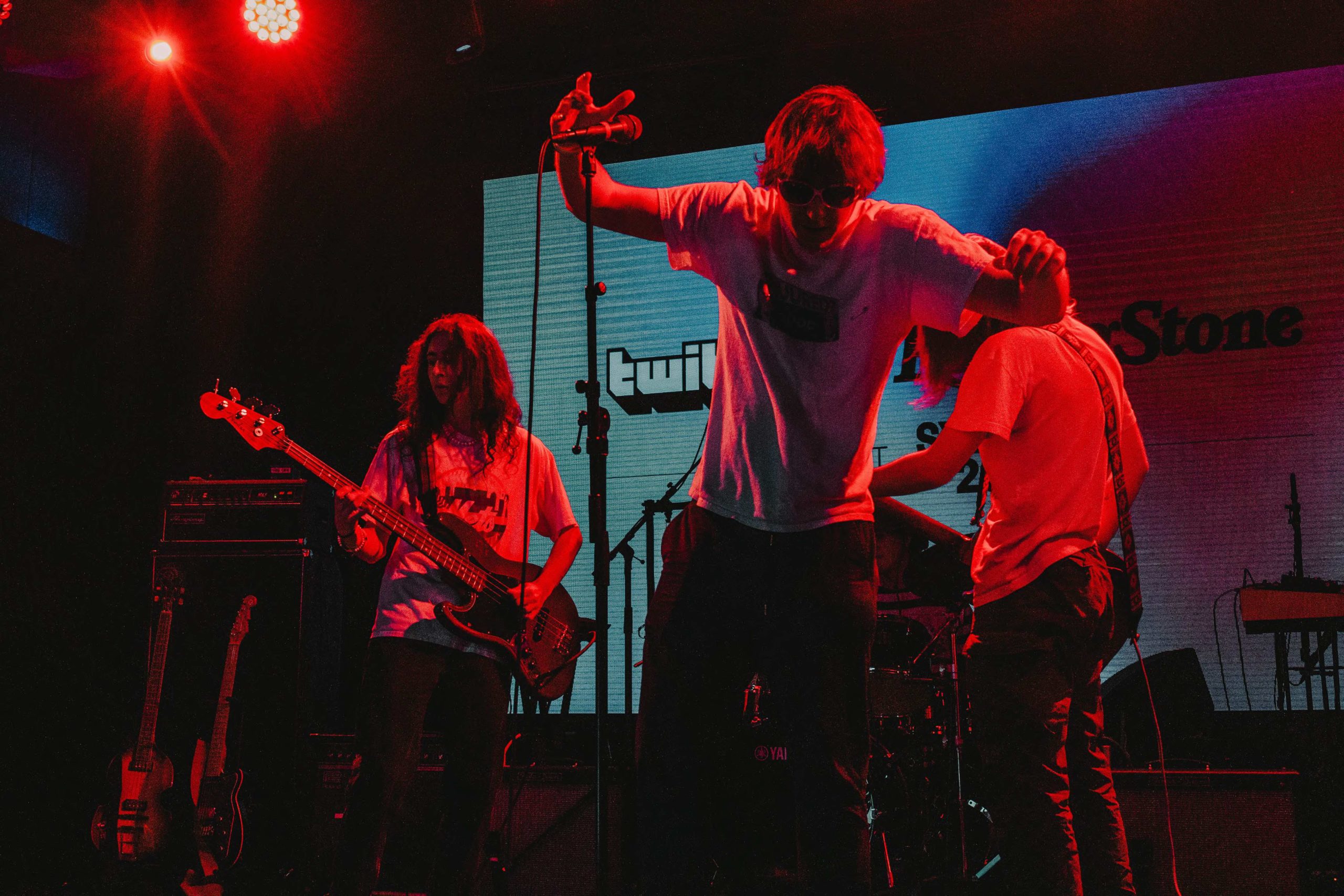 After a two-year hiatus, SXSW made a triumphant return to Austin, Texas

After a two-year hiatus, South by Southwest made its triumphant return to Austin, Texas last month. SXSW, the acclaimed “cultural festival,” once again took over the entire city, showcasing the newest in music, film, comedy, and technology.

If you think you’re prepared for SXSW, you’re probably not. But one thing is for sure: you’ll never be bored. With over 70 venues scattered across the city, there is always something or someone to see…but the tricky part is knowing who will be the next big thing.

Here are the artists we saw at this year’s showcase:

Wet Leg has had a meteoric rise in the indie rock scene. Founded in 2019 by Brits Rhian Teasdale and Hester Chambers, the band found success in 2021 with their breakout single “Chaise Lounge.” Despite only having four official songs released, Wet Leg’s shows at SXSW were difficult to get into and jam-packed. They had a cosmic energy and commanded the stage better than some artists over 10 years of experience. Now that their self-titled debut album is out, Wet Leg is surely not to be missed, and very well might be the next big thing in the rock scene.

If you live in Austin, you’ve probably seen Sir Woman play. If you don’t live in Austin, this may be your first introduction to Sir Woman, and we couldn’t be more thrilled to introduce you.

Sir Woman creates music that is infectiously fun and makes you want to dance. If you see them live, it’s hard to not groove along with the band. Frontwoman Kelsey Wilson (formerly of Wild Child) performs with ease, and is one of those musicians that you know was born to do this. It doesn’t matter if you’re in a small club or a large theater, Wilson’s vocals soar and embrace the crowd in a tender caress. Sir Woman successfully modernizes an old-school sounds to makes them their own, complete with a brass section, joyous back-up singers, and a percussion section that’s tough to beat – we’re talking a full drum kit as well as a mix of congas, cowbell, and others.

Mauvey was an artist that we kept going back for. His genre-bending music was irresistible and his performances were ridiculously energetic and fun. Despite the size of the stage or the audience, Mauvey commanded the space and filled up any room he performed in. Several times, he jumped into the audience and danced with the crowd, utilizing his unique singing voice to preach love and acceptance in a way that wasn’t cheesy, but endearing and empowering.

Geese is a rock band from Brooklyn, New York, made up of five friends from high school. Originally the band intended to break up before going to college, but by mid-2020 they’d caught the attention of several record labels, ultimately signing to Partisan.

On stage, Geese’s chaotic energy draws you in and leaves you wanting more. The guitar riffs are angular and hypnotic and reminiscent of the Talking Heads. Meanwhile, lead singer Cameron Winter’s vocals draw an eerie familiarity to those of The Stroke’s Julien Casablancas. If you’re looking for the perfect blend of nu-wave, psychedelic, post-punk, and NYC-inspired art rock, look no further.

You may know Ezra Furman‘s music from her previous band Ezra Furman and the Harpoons, or potentially from Netflix’s hit show Sex Education for which Furman provides the soundtrack. In any case, Furman delivered a solid set of heartfelt, genre-spanning anthems. She has everything from easy slow songs that feel like falling in love for the first time, to upbeat rock songs that border on punk. When we say she has everything, we really mean everything, including a spectacular live performance.

You may know of Jelani Blackman from the 2021 Gorillaz EP Meanwhile; he has been working diligently in the London rap scene for some time. His Saturday set showed that he has what it takes to be a successful solo artist. The energy was palpable and filled the small space, the deep bass and quick rhymes were hypnotic and seductive. One thing is clear: Blackman is not afraid to break boundaries and try something new, and we are so excited to see where he goes from here.

Gustaf was one of those unexpected gems we weren’t expecting to find, but are so glad we did. The five-piece punk band hails from Brooklyn and has been making a name for themselves in the New York music scene. The band grooves as one beast and never takes themselves too seriously. Gustaf recalls the spirit of ’90s riot grrl bands, delivering an energy that is unparalleled from other rising artists. Before finishing their set at Augustine on Wednesday night, Lydia Gammill, Gustaf’s frontwoman, told the audience, “We aren’t angry…we just got something we have to let loose!”

flipturn has blossomed from a small project between high school friends into a maturing college-rock band. The band’s catchy choruses and snappy guitar riffs are similar to indie rock peers The Backseat Lovers and Briston Maroney. Impressively, flipturn does not feel young or childish, but instead delivers their music with the soul and wisdom of a band well beyond their years. With alt-rock’s recent artsy renaissance, flipturn look to be at the forefront of its revival.

Ural Thomas and the Pain

There are few artists that can shake you to the core and make every hair on your body stand up, but Ural Thomas and the Pain is one of those artists. Thomas started his career in the 1950s and went on to work with acts such as Etta James, Otis Redding, Stevie Wonder, and James Brown before moving back home to Portland, Oregon in 1968. He retired until 2013, but resurfaced with his backing band the “Pain” and proceeded to release 2 albums and returned to touring. Thomas’ set transported us back to nineteen-sixty-something, and we can’t wait to groove with him again.

Austin’s very own White Denim was a delightful addition to this year’s SXSW. Their guitar-heavy set delighted audiences and allowed for enough freeform space to do what you please. Their distortion and grooves channeled Dr. Dog meets Ty Segall. 15 years into their career, White Denim continue to be the perfect soundtrack for your summer.

S.G. Goodman, originally from west Kentucky, brought a Southern haunting to SXSW that is both genuine and beautiful. Her songwriting is remnant of Jason Isbell, but her guitar sound brings an element of blues and psychedelic rock. Her music feels utterly American, a perfect hodgepodge of singer-songwriter genres as she tells poignant stories of the past, present, and future.

Mississippi garage punk vets Bass Drum of Death have held it down in the indie scene for over a decade, but they still have the same energy as a young band eager to make it. You can easily hear the bluesy Southern influence in the distorted guitar riffs, elevated by off-kilter NYC-rock percussion and the wailing of lead singer, John Barrett. Their Thursday night set was rambunctious and ignited mosh pits throughout the audience.

Women in rap are having a moment, and if you’re looking for the next Rico Nasty, we may have the next group for you. Sister and brother duo Lil Cherry & GOLDBUUDA combine elements of rap and K-pop to create an exciting new sound that is free-wheeling and in-your-face. Their live performance was nothing short of spectacular, and the two make throwing a party look easy.

Japenese Breakfast‘s Michelle Zauner served as one of the festival’s keynote speakers this year to discuss her best-selling book, Crying in H-Mart. After receiving critical acclaim both musically and literary in 2021, Japanese Breakfast and Zauner more than delivered in Austin’s smallest venues. We weren’t entirely sure what to expect from Japanese Breakfast’s performance, but ended up being blown away by the firepower of the band and Zauner’s euphoric stage presence. Japanese Breakfast are currently packing out large venues, so we highly suggest you catch them in the smaller clubs if the opportunity pops up.

Yes, we know that Dolly Parton is arguably the biggest female country singer…ever. But we do still feel it absolutely necessary to highlight her in this showcase. After 60-plus years in the industry, Parton somehow sounds better than ever, and can still throw down on a killer show. Plus, there’s something endearing about a superstar who can still admit she gets jealous when someone hits on her husband, (that is how we got the hit “Jolene” after all) and the legend modeled her look on the town “tramp.”