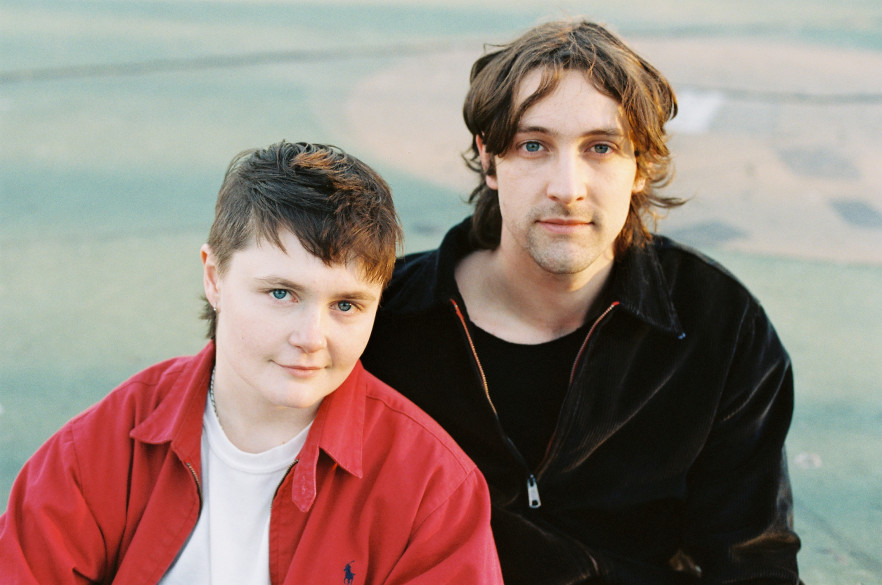 Iris James Garrison and Alex Harwood, better known as Bloomsday, have entered the NYC DIY scene with their first single “Phase” off their debut LP Place to Land – out on June 10 via Bayonet Records.

“Phase” is an affable timestamp of a transitional point in lead singer Garrison’s life – when the forces of nature push you into unwarranted change and you have no choice but to face it. For Garrison, they faced a new identity, a new job, a new housing situation, and being broken up with all at once, making comfort no longer an option in their life. Lyrically, the single resembles a snapshot of the pleading that occurs in the height of a moment of just wanting the difficult stuff to pass.

“I wanted to symbolize letting go of that attachment, in this song specifically to many things I had that were stable,” Garrison said. “I had a job change, I had my housing change, I had changes in my friend dynamics and I was dumped and it was all at once. I had to let go of the attachment to a chapter or a part of myself that I was growing out of.“

When talking with Iris, they opened up to a delicate duality in creativity that is often forgotten about – the push and pull between collaboration and isolation. On one hand, as a creative you want to be able to work with someone that will aid in your growth as a musician but on the other hand, it’s incredibly scary to open up to someone. “Phase” marks Iris’ ability to explore with Alex Harwood the benefits of a strong partnership in music.

I had the chance to see Bloomsday at Brooklyn venue Baby’s All Right on Wednesday, March 16 in celebration of their single release. The duo demonstrated their talent, their readiness to enter the scene, and also their amicable acceptance for one another as artists, which led to an invigorating live performance. The set was full of songs from their forthcoming LP as well as a cover of Elliot Smith’s “Twilight”. While “Phase” is a tender plea for the easy way out, the group’s newest record is full of profound rock moments and velvety guitar riffs as Iris’ live vocals powerfully cut through the instrumentals.

Read more from Iris on the making of “Phase” and check out the single below. Bloomsday will also be playing at The Broadway in New York City on April 21st and The Pouch in Philly on April 23.

I think the impending doom, at least for me when change is inevitable, is there’s this feeling that it’s going to be the hardest way out but I think usually I end up being completely fine. The anxiety and the impending doom of what can happen is definitely more where I was at  [mentally] when I wrote this song. I wouldn’t say it was easy, I had a really hard time adjusting to all the changes that were going on at this time, and right after we recorded this song, COVID hit. The easy way out is trying to alleviate my own anxiety. To answer your question “is there an easy way out?” I think being present with what’s actually happening is easier than what your mind’s made up to be is going to happen, just because things are changing doesn’t mean they’re going to fall apart.

Why pick “Phase” as the introduction off this album?

I had someone say that “Phase” is the sonic thesis of the band – it feels very inclusive of all of the elements of our writing. “Phase” was a sort of maturing of our sound and when we wrote it we almost immediately were able to demo it in a studio, so it also felt like an overall theme for the arch of the album. The album is composed of songs from three years ago, it follows my own personal transition as a non-bianary trans person but I only realize that in hindsight. “Phase” was this turning point for really having to shed this old self and come into this new self, so I wanted to lead with something that encompassed all of the elements of our music.

In your music video for “Phases,” you watch the main character being forced into having to walk away alone, but I think it’s clear that that is not a choice, or at least it didn’t seem like something they chose. What was important for you to symbolize in this visual representation?

You never see the other person in the video, it’s sort of the representation of a part of the self; whether it’s dependencies on other people or relationships or whatever addictions that keep you in the same patterns of not being able to stand on your own.

I had a solo project in college, I just liked to play guitar and write songs and I did have some people help record. I came to the city and was able to book shows that way, but once I got to New York I was feeling very not myself. I wanted to express who I was, and you see all these people around you in New York really being themselves and being authentic, and I was like I’m not doing that – whatever I was doing in college was not being in touch with this true identity and part of that was not being able to collaborate with other people. A lot of the time in music, I felt at least when I identified as a woman specifically, was that I was being told to sit on stage with a guitar and sing and stay that way and not play rock music and it led to this feeling of inadequacy in ways. Meeting Alex, he was the first white-cis guy that I met that was super gentle and opened up a world of “you can do this, and we can do this together.” He was by my side through a lot of growing pains and meeting him he was like “Oh you want to start a real band band not just a you band, but a us band.” So, that was really special, you can’t really ask for that, I just met him and we wrote this song “Stand By” together when we first met. I do the writing of a lot of the lyrics, most songs he helps me figure out what the song is going to be composed of and I put it together in what it ends up being musically. I feel like he is my brother at this point because he’s been there with me through all these changes. Even when I wrote “Phase” having him as a constant – it’s just amazing having those people begin to walk by your side.

I think that’s really special, and isn’t as common or a lot more difficult to find in platonic relationships.

‘Place to Land’ is out June 10. What on this record are you most proud of? Did you ever find yourself surprised by your creations or limitations when making music?

I needed to figure out how to own my own voice in the making of my own album. Imposter syndrome was hot and heavy and it was just me and Alex during the pandemic, he was one of the only people I was seeing besides the people I lived with and my girlfriend. The thing I’m most proud of is being able to hone in on our sound and find the language between the two of us and have those awkward growing pains of figuring out how to express things and how to say what I think without immediately second guessing myself. It ended up being weekly, we would just go in and work on these songs, and exploring these songs together we were finally able to make the sound. For so long we were a live band playing, it was almost like we were scared of recording it because then it’s done. Taking the risk and taking the huge step together and trusting one another that we were playing on one another’s team.