Palehound and the Best Day Ever 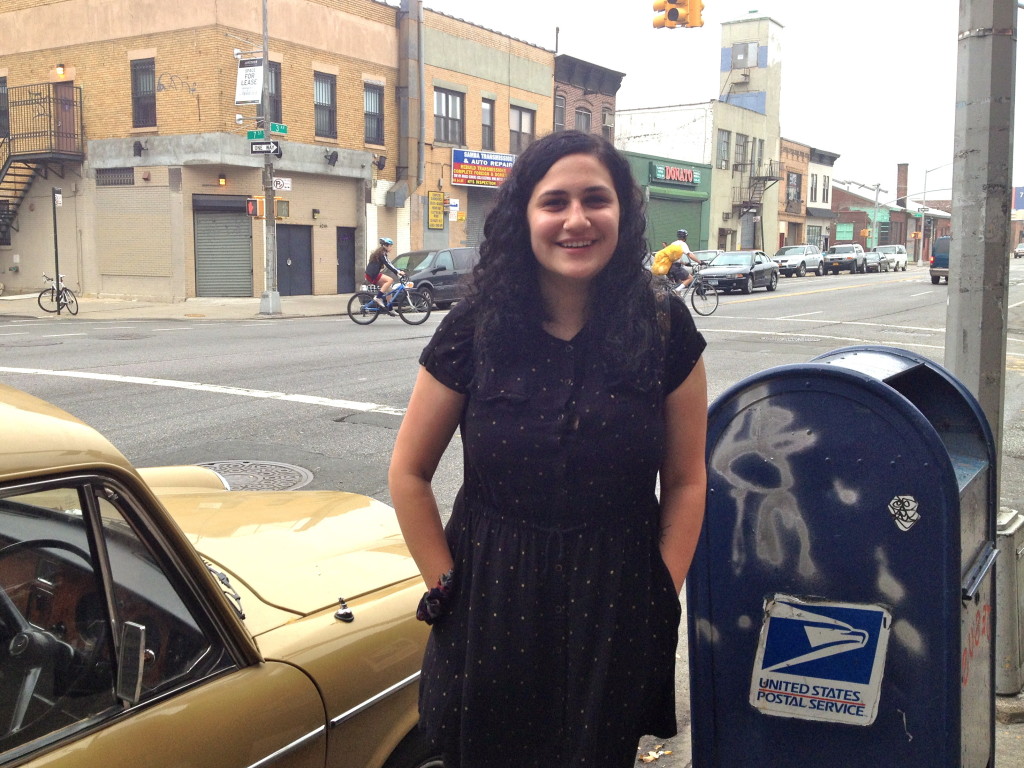 Ellen Kempner and I have just had the best day ever. It’s late in the afternoon on a grey Sunday in New York, with that weird cold-humid air that pushes through into early fall, and we’re saying goodbye outside a subway stop in Park Slope, Brooklyn. We’ve known each other for only this one day, though when we board separate trains we embrace warmly as two friends would, with that added “I’ll talk to you soon” that girls tend to punctuate with wide-teethed smiles and awkward waves. She is heading back to Yonkers by way of Grand Central and I will go back to Bushwick to finish up some writing and relisten to the Bent Nail EP, the first official release of Kempner’s Palehound project, as a means to further process our conversation and recontextualize Kempner from the perspective of her music. This is okay because we’ve been having a fangirl kind of day.

Kempner, nineteen, curly-haired and precocious, is a musician who worked initially as a solo project and has now added three additional members to her band, and whose debut EP will release today on CD and cassette through Exploding In Sound Records. Her demeanor is calm about it, and when I tell her I’m looking forward to playing with her in the future, she remarks, “Oh, wait you’re that Dayna? You’re Manors?” We exchange excitement over the show, and she tells me she’s been listening to the demo, and I ask her how’s she’s feeling about the release of the EP. She says she’s excited! She’s really excited! But that’s all she offers, and her first interview appears to be going very well, albeit remarkably hard to pull quotes from.

Our first stop is Daisy’s Diner, a diner I promised her was the best in Brooklyn. Its charm lives within an effusively friendly older woman who people often mistake for and call Daisy, when the place is actually named for a beloved dog.

“You’re a diner person, aren’t you?” Kempner says as we sit down and contemplate the merits of both pancakes and eggs.

“Oh, one hundred percent. My favorite places are diners.”

“Me too,” she says, and she tells me about the Pleasantville Diner, which is in a town that her bandmate’s dad is the mayor of. “It’s so bizarre. It’s a really small town, but it’s, like, his dad is the mayor. I like it there a lot, too.” We parse the subjects of her Connecticut upbringing, her summer camp past, her current enrollment at Sarah Lawrence, poetry, and getting involved with the Exploding In Sound roster. Exploding In Sound, I note to her, is a purveyor of some of the most nineties-inflected guitar rock in the Northeast. How does she feel she fits in?

“Everyone on Exploding In Sound were my favorite bands in high school. I actually got involved with them by going to the CMJ showcase last year. Dan [Goldin] is such a good guy, he’s been so understanding, and the community vibe of the scene has made it very easy for me to come in and do things at my own pace.” As a full-time college student studying music “with a few public policy and sociology courses here and there,” doing things at Kempner’s own pace is important, and I ask her if she feels she’ll eventually put the music first.

“This is the priority right now. If something happens, this is what I want to be pursuing. This is what I’ve always wanted to pursue.”

Her wistfulness and alt-girl getup (nose ring, dark hair, loose frock) are carryovers from a time that perhaps Kempner herself never experienced—nor I, at least knowingly—but it seems dependent on the music and lifestyle that she participates in. It only makes sense, then, that after breakfast (she orders banana-walnut chocolate chip pancakes because this is America), we embark on our journey for the afternoon: a trip to The Bell House to celebrate Rookie Magazine’s two-year anniversary. If any event could simultaneously eschew youth while celebrating it, this was sure to be the one, and neither of us are too settled within our respective ages to not appreciate the paradox.

Very few of my male friends understand or care for Miranda July. Some claim its her inherent twee-ness or her bizarre “quirk,” but her films rarely appeal to the men that I know, even less so do her short stories. A female friend of mine, to whom I owe my understanding of the July oeuvre, once pointed out that July’s fiction, particularly No One Belongs Here More Than You, is written from a distinctly feminine perspective, making it difficult for men to level with. Sagely, she noted that art can be gendered to such polar extremes that its no wonder that men don’t understand or like her characters. They’re not people they can really relate to.

This wisdom seems important when listening to and interacting with Palehound. Though the music itself is rich and sturdy and incalculably above its age, it is easy to fangirl over Palehound in a similar way to how young women feel pride in or possession of Speedy Ortiz, the Crutchfield twins, Potty Mouth, Bully, and other female artists that are performing today. (I do occasionally worry that this supposed “resurgence” of “female-fronted” bands will begin to sound like a trend instead of the standard, and that it will inevitably ebb back to focusing on male-dominated music, the too-obvious norm.) But the conversation with Palehound is relevant because it feels like reading Miranda July—her music can appeal to all, but it’s nice to find something so confidently written and performed from a perspective I—and many other young women—can understand. It feels club-like, occasionally exclusive, but positively familiar. The Bent Nail EP in particular is dripping with female experience, especially in lines like “Vandalize my body if it helps you sleep soundly” and “My true love was a bummer.” Her music seems built from lines gabbed over at sleepovers and late-night diner visits.

Palehound is as much Liz Phair as she is Mirah and Annie Clark, but presented through a youthful, not-yet corrupted lens. Her cunning, self-aware lyrics ring of Doug Martsch, Travis Morrison, and all the staples of the nineties that made us feel with our brains and not our hearts, and yet she doesn’t slice like a subtle, hot knife. Palehound’s EP is much more “The Weather” than “I Would Hurt A Fly”, and for the sake of hapless positivity, I sincerely hope it stays that way.

“This is the fucking Breeders!” Kempner and I are waiting in a short line outside of The Bell House and she’s telling me about seeing Kim Deal on stage at Bowery Ballroom. She had gone to the show with pals Sadie Dupuis (of Speedy Ortiz) and Denny Bowen (of Roomrunner), and the pair, like some rock music parents, had stood toward the back of the venue while Kempner placed herself smackdab in front of Kelley Deal. “I’m not too cool for that!” she exclaims. “They were being way too cool.”

I identify with her enthusiasm as a ghost of my former self, a little part of which has withered since getting older, a person who wears soft-soled high-arch shoes to shows, and doesn’t stay a minute past the closing act, but nothing could prepare me for what we were about to see. Like a room full of ghosts much too early for Halloween.

Inside The Bell House, the energy was as potent as the colors—a slime-green dyed head here, a floral maxi dress there, and the patron saint of young femininity, Tavi Gevinson, in a canary yellow kimono-esque dress. Besides her stories of summer camp, Ellen and I begin to talk like old friends about ice cream, family, music, childhood. I introduce her to a few people—our intern, also a fan, members of Potty Mouth (around her age), and a few other writers. When the event gets underway, we are both buzzing with excitement. It feels rare and unmitigated to get into a room with a hundred or so women who feel exactly the same as you, all of different backgrounds and with a large bell curve of ages.

The big reveal of the day, after hearing short speeches and readings from Rookie contributors, is that there will be a talent show, which is to be judged by some special celebrity guests. The crowd is humming with mounting girlish excitement as each name gets read, the third to last being Annie Clark of St. Vincent. Kempner looks at me and we practically squeal.

“Oh my god,” she says. “She's—she's everything.” The celebrities come out on stage, and we beam through act after act of girls much more talented than us performing songs, doing standup, eating pizza. Any time Annie Clark says anything, Kempner and I have emoji hearts in our eyes. At one point, we are clutching each other's shoulders in squeamish excitement without even knowing we'd done it. “You don't understand,” she tells me. “This is the greatest day. Ever.”

After the talent show ends, we are hawk-eyed looking for Clark, knowing that in a room as small as this, with such a kind, unpushy audience, it might be the only chance we have to speak to a woman we've both always looked up to. Her guitar playing, Kempner tells me, has been a profound influence. We track Clark down eventually, and within seconds, Kempner has approached her, shaken her hand, told her how much she admires her, and we've taken pictures, riding a high of being face to face with the Bella Donna, the Mother Mary, the guitarist we've always loved so much, and having her smile right back at us. It takes a while for it to all to settle in, and when it does, I feel like I've just lived through a Miranda July story, all full of empathy and heart.

Leaving The Bell House feels like bursting a bubble, though the excitement still shows on our faces. The day is still overcast and there is an element of anticlimax as we part, but it secretly reminds me of something Kempner and I had talked about at Daisy’s. Having played guitar since she was young—“very young, like four years old!”—I had asked what some of the “early material” was like.

And here we are, back in the real world, while the buzz of something better and more idyllic, the potential for which is great and consistently exciting, still remains all around us.

Palehound's Bent Nail EP is out today on Exploding In Sound Records.