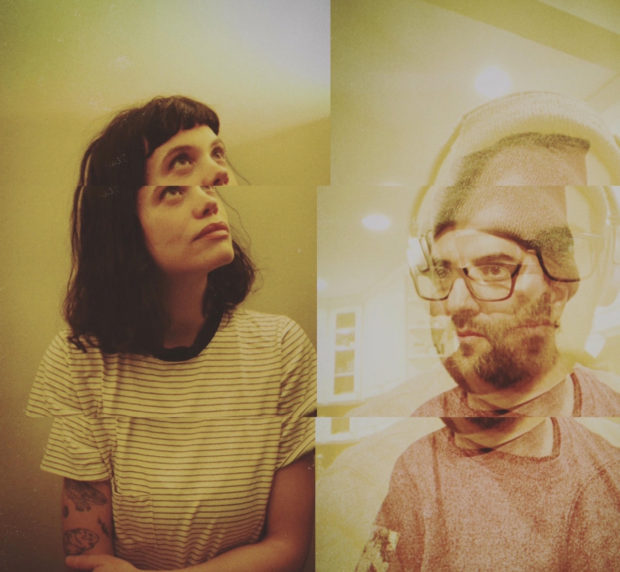 As we appear to be swinging the doors wide open, post-lockdown, there’s a particular PTSD to re-approaching shaking hands, standing in crowds with strangers, etc. Born out of being apart, Brooklyn-based duo Phantom Handshakes and their new album, No More Summer Songs, might just be the perfect soundtrack to re-striking the first half of the being inside/outside balance.

Dreamy, wistful soundscapes sweep you away throughout the LP as equal parts melancholy and hopeful mix to meet the times we’ve, hopefully, persevered through.

To celebrate, Impose is very happy to bring you a track by track breakdown of No More Summer Songs from Phantom Handshakes themselves. Enjoy it all along with a stream of the album below and pre-order your copy now available on limited edition vinyl here.

The music for this track was actually something I recorded years ago. When Federica and I started working on music together I went through some old demos I had done to see if I had any older music that might work for Phantom Handshakes. I found this instrumental track and I was a bit surprised at how good it sounded, maybe too good. I didn’t remember recording it at first and I was worried it might’ve been an old bandmate’s song that made its way onto my hard drive. But no one’s claimed it so far so I think I’m safe.

When Federica first suggested we open the album with this track I was unsure. I tend to think the first song on an album should be the catchiest, so you can grab the listener, and this is the longest song on the album and it’s a bit of slow burn. But now I’m glad we chose it as the album opener. I love that the album begins with a fade in. It invites the listener in.

The early albums from The Drums and Beach Fossils have always been an influence. The way the songs on those albums are built around these very minimal three or two-note guitar lines. Also newer bedroom pop artists like Day Wave and Occult X. They’re able to achieve a total vibe with very sparse instrumentation. This track is my attempt at that.

I had the chord progression for this track for a while and always tried to fit into a song but it never really clicked into place. I’ve probably recorded five different demo versions with this chord progression but when I re-recorded it for this project and shared it with Federica and she added this vocal melody and lyrics that really worked with the music.

A jangly guitar idea that was also something I had recorded a while ago. I think I had recently seen the great jangle-pop band Pale Lights play live and was really impressed with their songs and how they have this clean guitar sound without having to rely on a ton of guitar effects. No pedal stomping, just plug your guitar into an amp and play. It inspired me to want to write something direct and immediate.

A lot of the musical ideas for these songs starts with me strumming an acoustic guitar, just two major7 chords strummed together. Major7 chords are my favorite chords. They have a certain warmth and sadness to it that I just gravitate to. I try not to overuse them in my writing because they can be really impactful when used sparingly but there’s probably at least one major7 chord in every Phantom Handshakes song. Federica wanted the voice to be as warm and dreamy as possible, so we added a lot of effects to it.

Danceable, jangly and apparently happy, this song describes the forced “secret life” of a homosexual couple. One night, outside of a bar, they are attacked and beaten by a group of people who left them almost dead on the sidewalk. It is not about an episode in particular but how many stories like these we hear on the news? Nobody should ever have to hide who they love or who they are.

“How To Stay Awake”

This song started as an idea built around these synth chords and a drum machine beat, unlike most of the other songs which I usually write on guitar. I was listening to the more drone-y songs from recent favorite bands like Peel Dream Magazine and Dummy and was definitely inspired by that. Federica added these very cool vocal effects that were more like another instrument. We decided it worked well as an almost-instrumental interlude, or an extended intro into the next track “Skin,” which shares a similar instrumentation.

Probably the most shoegaze-y track of the album, “Skin” was the last to be recorded for the album and the quickest to come together. The song is about the masks we sometimes feel we have to wear in order to conform to society’s standards. The cosmetic “big grins” we use to hide our fears, trauma, our deep, inner wounds our “splitting skin.”

It took a while to find an arrangement we both liked for this song. We were having trouble coming up with a bridge. We don’t really write songs that need to follow a standard verse/chorus/bridge structure, but we wanted some kind of a breakdown in the middle section of this song, something to maybe quiet things down. We tried different ideas and landed on this one-chord bridge. “Keep it simple” is my main mantra when it comes to songwriting.

“All That Could Burn”

The hazy/dreamy/warm atmosphere of this song is somehow similar to Cricket Songs’ kind of ambience. Definitely has a fair share of major7 chords. It’s a letter to an old, far friend at the time of COVID.

This was a song we recorded for this great compilation from Ghostie Recordings last Halloween. We really liked how it came out so we decided to add it to the album as a sort-of a mostly instrumental bonus track. Like “How To Stay Awake,” we felt it works well as an experimental interlude so we thought it would make a good coda to the album.