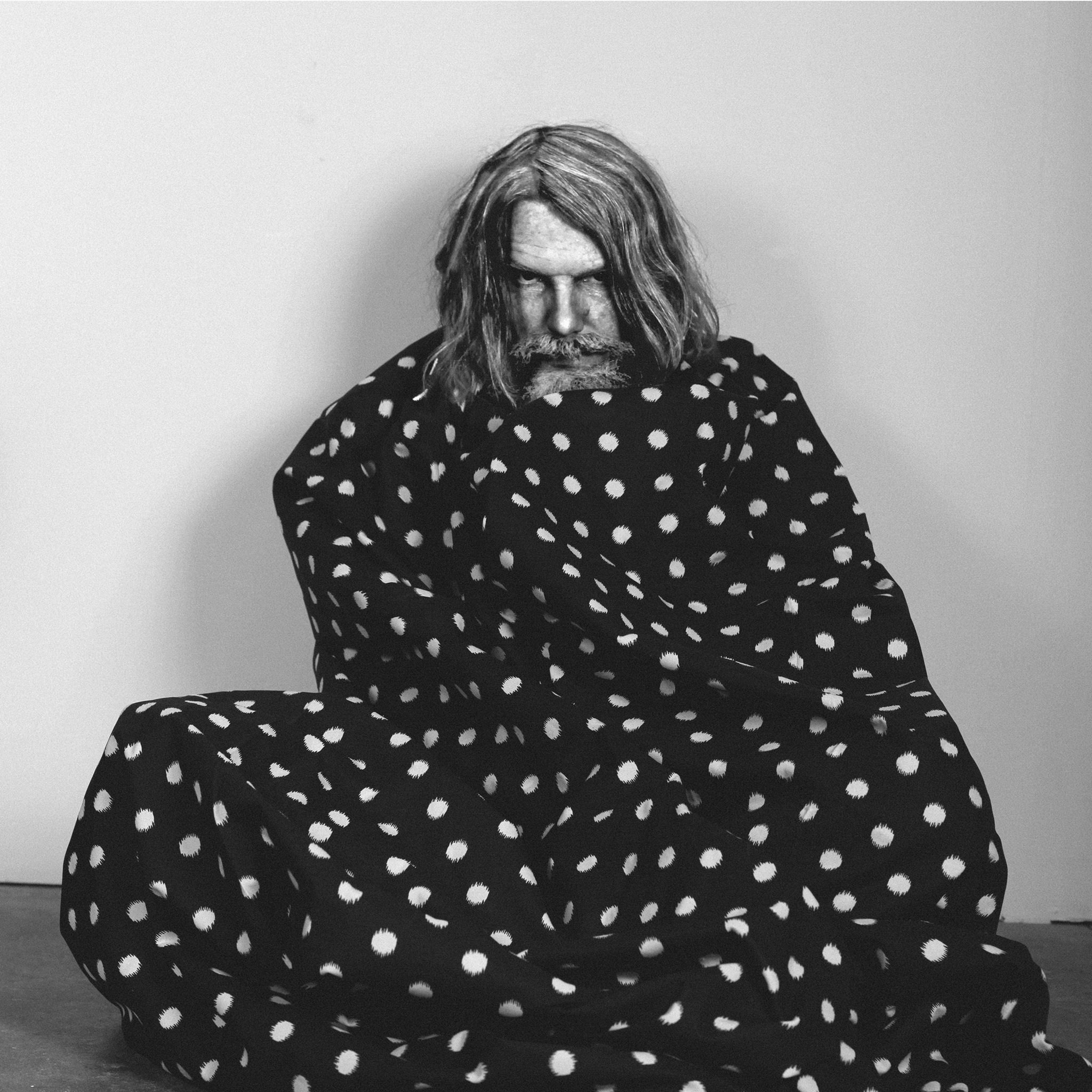 A little over a year ago, my friends and I headed to Zebulon Cafe in Los Angeles to see Gang Gang Dance perform their long-gestating record Kazuashita, their first in seven years. The set was an incredible one that bridged new material with old favorites. And yet, I remember the show being just as much of a Gang Gang Dance concert as it was a Jorge Elbrecht one. I had never heard of Elbrecht before, but my friend was adamant about getting their early to see his opening set. I’m very glad that we did.

His set opened on a masked singer lit only by the projected visuals. After a couple minutes, the visuals darkened a bit, and a seemingly-dazed man wrapped in a polka-dotted cloak – guided by a towering figure dressed as a nurse – emerged from the darkness, and sat himself down in a chair. Gazing trancelike at the floor below through his long hair, Elbrecht launched into his set and leaned forward in his chair, where he’d spend the rest of the performance singing with the masked singer over old-school drum machine loops and cascading dark synth washes.

Occasionally, the man in the nurse outfit would check in on Elbrecht, routinely placing a calm hand on his patient’s shoulder in between staring out at the crowd as if to shake him from near sedation. At times you could see momentary struggle between the two, with Elbrecht resisting some of his nurse’s input. At one point, the nurse held a clipboard up to Elbrecht as if to show him test results, which Elbrecht nodded at while clutching the microphone. When the set ended, the nurse helped Elbrecht up and lead him across the stage and finally returned into the darkness as a flurry of visuals closed the set where it had begun.

For me, this attention-grabbing bit of performance art was my introduction to Elbrecht’s work and artistry. The music stood in contrast to the brittle, nearly-sedated image he presented, though there was still a vibrant (but guarded) vulnerability both in the music and in his stage presence. I’m still thinking about what it all means.

Since then I’ve seen his name pop up in several places. After the show I fund out he had co-produced and mixed Gang Gang Dance’s Kazuashita. He’d also worked with Ariel Pink throughout Pom Pom and Dedicated to Baby Jameson, and wrote and produced on the forthcoming Sky Ferreira album, including her stunningly dark symphonic turn with 2019 single “Downhill Lullaby.” He’s also worked with Japanese Breakfast, Tamaryn, and Wild Nothing. I’ve cherished these various projects he has worked on, and looking back, it’s not hard to trace Elbrecht’s influence across these projects and songs – albeit in an assisting or contributing role.

All this leads to my excitement over his new album Gloss Coma – 002, which was released in December. Elbrecht is on the cover as I know him: hunched forward, covered in the black polka-dotted cloak, staring trancelike into the camera. The album enhances the performance and vice versa. Early songs like “Tired Land” and “Perish” tap into Elbrecht’s uniquely claustrophobic volatility, and add a menacing fog to the mix.

The Sky Ferreira featuring “The Freezing” starts with an unsettling vocal wail over a groovy synth bass before Ferreira begins. “Apparition” also starts with processed shrieks over a steady  thump, before Elbrecht enters with reverb-laden vocals, and eventually disappears behind the chaotic wash of noise teed up on a kick.

There’s a shadow over the whole project that I can’t shake when listening or looking at the cover. Elbrecht very much plays with influence; there’s an undeniable bridge between his sound and those who similarly play with uncanny darkness and dance-sonics (Depeche Mode perhaps being the most pronounced), but to call Elbrecht just a descendent of this legacy would overlook the new aspects he injects into the mix.

He seems just as occupied with creating zones familiar to the ear as he is in breaking the mirror that we’re accessing his work through. Penultimate track featuring Drab Majesty “Ignite the Eyes” seems to encapsulate all of this. There’s skittering percussion, an elastic synth bass, and fuzzed-out wails that pace restlessly before crescendoing into a dooming guitar over militant drum-machine rhythm before burning out and decay into nothing.

For all of the space I’ve taken to talk about how dark or mysterious Elbrecht seems as a character, there are also moments of genuine beauty throughout the record. For an album that concerns itself in the burning and emptying of manic energy, closer “Corpse Flower” stands in contrast. A gentle synth bass duets with understated, strutting drums, with Elbrecht echoing just a single line (“try living in the moment”) over and over again.  Whether it’s an instruction to his audience, a reminder to himself, or a comment on the times we’re living in, there’s a clear duality and struggle between forces and tones throughout the record. The same sort of conflict he injects into these songs is embodied by the on-stage struggle between him and his handler.

Since taking in Gloss Coma – 002, I’ve gone back and listened to Elbrecht’s previous releases, including the guitar-centered thrasher Coral Cross – 002 (released earlier in 2019), and 2018’s starry-eyed Here Lies. It’s through listening to these releases that I fully understand how versatile he is and how varied his sound can be, all while sounding like it’s coming from the mind of a frenzied creator. For whatever 2020 holds for Elbrecht, it’s clear that whatever mask he wears next will carry the same weight and consideration as the music he released in 2019. Though I doubt its shadow will look the same.