Julianna Barwick made me feel reborn 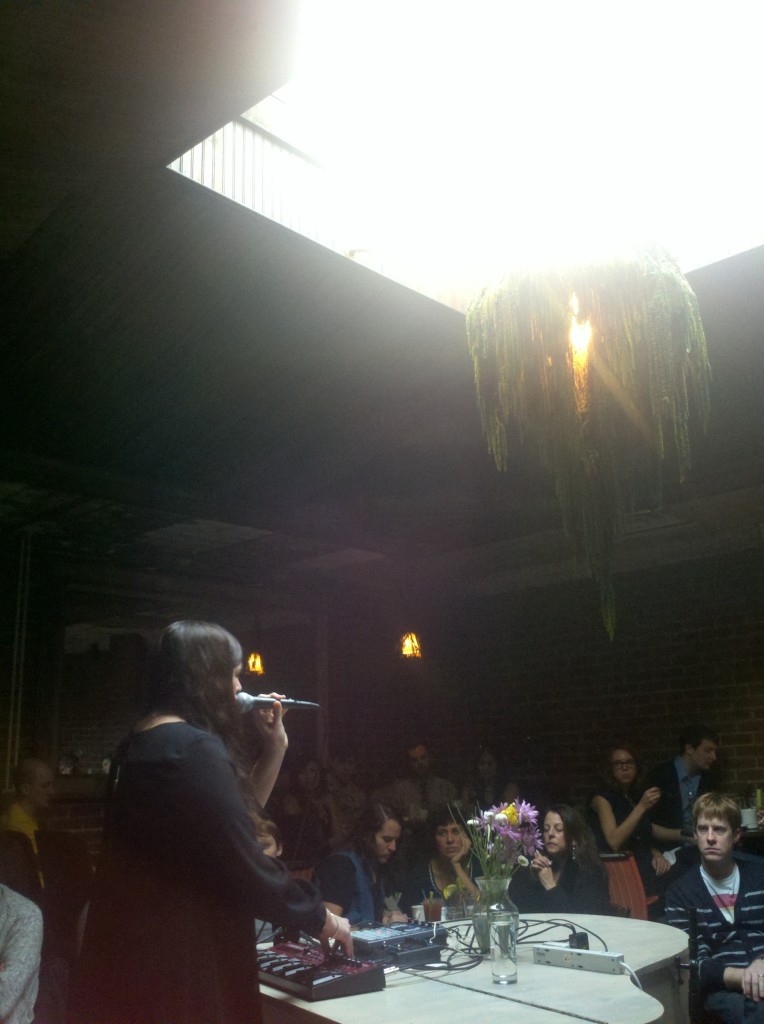 For New Year's Eve, against my own recommendations, I ordered a live stream of Phish at Madison Square Garden and projected it – a computer and laptop precariously balanced on steps of a rickity ladder – to a screen between three big sound-responsive orbs. (The orbs are on loan and were designed by Peter Edwards). Talk about titilating!

We set up a microphone so that people could yell to Trey and make aquatic puns. Phish played Farmhouse pretty early on. The only thing truly lovable about the Phishcast was when the camera was turned on the front-row audience, alotting the brief opportunity to see hippies with their eyes closed and their hands above their heads – the girls were bouncing and the boys were sloppily singing along.
I have eight roommates, and when it began to seem that nobody was going to join us on our quest for glistening, superlative irony, we walked to the Lone Wolf bar to take shots and see red. It wasn't crowded but there were actually other people in the bar, which is a fine, regular, dimly-lit place with barstools and decent-looking bartenders. Across the room atop a stage that seemed very far away, a squat couple played acoustic instruments and sang about love, consumating their new year with what would ultimately be a disappointing show in their earnest careers.
When we returned to the Wallet we were howling, rabid beasts. Ari and Rob came over and we inspired them to drink more. As the countdown commenced, Phish had hired aerialists in black and white outfits (suspended from black and white shrouds) to hold their bodies in triangular formations until it was technically 2012. That was the last thing I saw of the Phishcast. Moments later we were screaming into the microphone to Empire State of Mind. I taped Mike to the microphone stand. Ari got on the drums. A neon green tarp was spread across the floor, which was instantly covered in alcohol and then everyone was sliding on it. Adam broke a chair. One of our guests broke a chair. The guest then requested more things to break. Pat opened a trapdoor to a pit in the middle of our main space where a broken television might be. I jumped into the pit. Mike jumped into the pit. The broken television was handed to the guest. I screamed into the microphone. I grinded with Shannon. Then we went to Vibes HQ.
Rating: 3 Treys

MANHATTAN INN
Manhattan Inn's New Year's Resolution is to organize monthly drone lunches – “Avant Brunch” – providing ticketholders a prix-fixe meal, a peaceful performance by a sensitive musician, and a steadfast and unchecked stream of bloody Marys – on behalf of Iceland's (and currently, Brooklyn's) most popular treasure, Reyka. The inaugural act on the first day of the year was Julianna Barwick, whose “drone” is that of an angelic, somber choir.
The important thing to remember is that in the center of the main room in Manhattan Inn is a large, square skylight; on any given bright Sunday afternoon, as witnessed on January 1st, the ivory grand piano that Manhattan Inn is known for is illuminated by fresh white sunlight. In the center of it hangs a mossy, lush chandelier, whose soft, summer-olive tendrils begged to be touched! (They weren't.)
Christopher Weingarten, who had a curatorial hand in the event, was DJing and smiling, playing the “Escape from New York” theme song and greeting everyone. Because I arrived alone, and because my friend Tammy Hart was managing the reservations et al, I was seated at the fun, hodgepodge table. Julianna was there with her charming date, and she did not look the least bit hungover; her skin similar to Bottecelli, her eyes like the unlit interior of a 1970 Torino Cobra. Instead of getting drunk, she was drinking tea.

Everyone talked about the fun they had had the night before (at my request) and later conjured up reasonable New Year's Resolutions (after a prodding). My meal came (eggs, bacon, and keilbasa, not a piece of parsley more) and then Julianna began to play. Her looping machinery was arranged on the piano, next to a propted-up daisey and a thin glass of water. Her singing style was akin to the bowing of a violin. A pedal would record a tone from her and repeat it, and then she would sing back to it; the voices she was leaving to the pedal took on a life of their own. The sunlight of the new year was pouring in through the skylight and splashing over Julianna's hair. My hangover was flaking off of my face. A woman across the room from me was visibly asleep.
Rating: 4 weed leaves

SHEA STADIUM
By the middle of Guardian Alien's set, Shea Stadium was sold out – unpremeditatedly and nearly irresponsibily sold out. It was the last night that Trippple Nippples would be playing in the US (of their first US tour) and it was the coldest night of the year – the previous night had been 16 degrees but at this point it was barely scraping 10. Many people had brought their own sake to celebrate.
Trippple Nippples, the Japanese female riot-pop version of GWAR – who employ white masking-tape bikinis and knit armor in place of spiked platforms – took to the stage, disguised as the DIY cast of Lion King on Broadway. They started to play, which sounded great, like Pizzicato 5. Half the audience was smiling and trying to dance, but a solid contigency seemed distracted, perhaps nervously contemplating the bathroom line. A guy dressed as an icecream man stuck out from the crowd. The lighting at Shea was especially dim, or seemed weaker than it usually does because of how much more visually stimulating Trippple Nippples is than regular bands. The ladies crowd surfed and screamed. And now they're gone.
BROOKLYN FIREPROOF

The past two times Justin Frye has been asked to perform solo at an event, he offers up his jazz band, which includes Michael Etten on saxophone, Nat Roe on the drums, and I act as the vocalist. The name? Jazz Massagers. Part of band preparation is drinking vigorously, which was aided by Brooklyn Fireproof's open bar of – you guessed it – Reyka vodka. We were playing as part of their art show, OBSESSIONS, which Justin was a visual contributor of as well – he made prints of cell phone pics of tattoos he's given (at home). The bar has a very nice room for art shows – clean and white with high ceilings. The area set up for bands had a soft, circular pink rug that had been left from a feminist show (surprise surprise). The bar is more attractive than its name would lend, again with high ceilings and pretty exposed brick; a fair amount of the staff at Little Skips was there. A regular came in with her dog, and groups of people shouted the dog's name. Some peope had nice jewelry or pretty accents from New Zealand.

An important part in doing vocalizations for a jazz band is to get sexy. One way to do that is to massage yourself while you speak. From there, it's important to rock your hips like you're making fun of other people having sex. Sometimes not-wearing underwear can be helpful. Justin and Nat played funny, ba-bum-bum-bum-bum, ta-tisstiss ta-tisstiss jazz, and Mike squonked excitably. All of the vocalizations came from Yahoo Answers – they can be read here.
Rating: 3 weed leaves