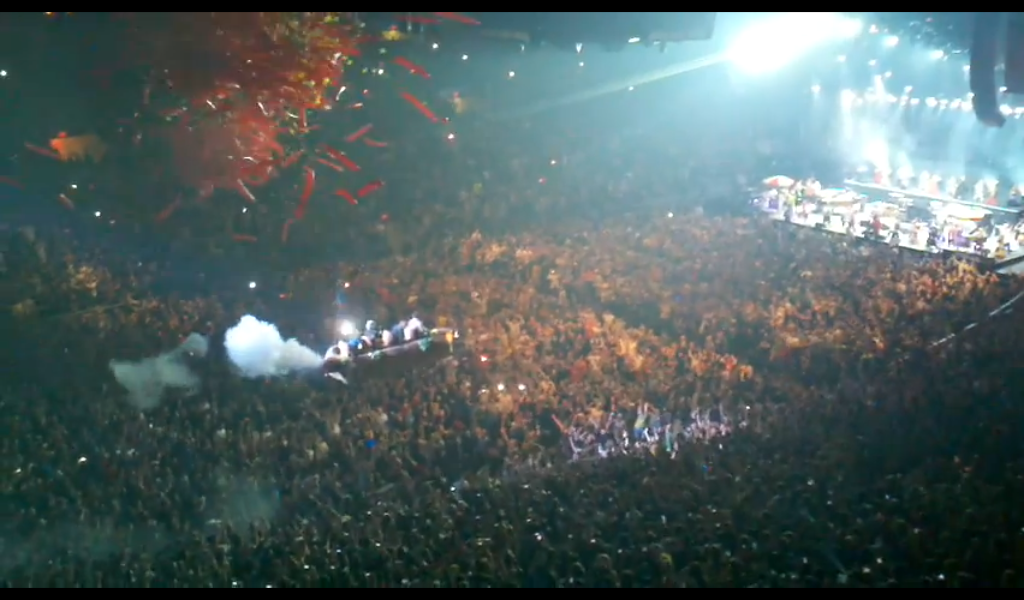 Sometimes people visit a city for a short time and during their stay they want to go to the weirdest possible party, so that when they get home they can describe it in four or five unfathomable words, and the response will be, “oh man.” I've been to deep cavernous clubs in Prague and green lazer technos in Reykjavik, and it's always a situation where I just wander around, ramble at Australians, and then drink emphatically until whomever I'm with calls a cab; and that's what I'd do at the Unicorn Meat Electric Circus.
They'll have have aerialists hanging from ropes, aerialists hanging from silk shrouds, aerialists hanging from hula hoops (which is apparently called a “cloud”), practiced ravers with sticks of fire, flying trapeze, dubstep, house, glitch, trance, bartenders dressed like ringmasters, bartenders dressed like lion tamers, midgets dressed like oompa loopmas giving out psychotropic tea (their words, not mine), pillows on the floor, and sitar music accompanied by live projections of genies. It's the brand of nightlife liable to request that you call it a New Year's Eve “experience,” but I generally chase my experiences with a sip of something cool.
Price: $35, $75 with open bar (open bar ends at 3)
Rating: 2 weed leaves

The sold out Phish show at MSG on NYE will end up having more people (albeit people of one specific ilk) than the total amount crushed into Times Square, and every neo-hippie will have the opportunity to drink, use a restroom, and retain feeling in their feet, none of which is afforded to those spending hours outside, stuck behind police barriers on Broadway. It's also easy to smoke weed in MSG because it's far too large a building to enfore frivolous laws. When the clock strikes twelve and Trey gets naked, the stadium will actually be able to sing along to the song that's playing, because it'll be Farmhouse or Dirt or whatever, and not Auld Lang Syne. And apparently Phish pranks the audience; last year they appeared from the center of general admission, buckled into a large, airborne hot dog with relish that flew them to the stage.
However, no one actually needs to go to this show because all three sets on NYE will be streamed over the Internet.
Price: $275 on Craigslist
Rating: 1 weed leaf

I guess Soundcloud's eternal Christmas present to all of us is to show pop-ups of comments a track receives as seconds progress through the song, at the same moment the comment had been published, allowing the listener to wonder – did I feel that, too?
I was listening to Nosaj Thing, who is sort of like a singer-songwriter as far as trance goes, because most tracks have these mysterious little melodies that lend them a sort of cloak-and-dagger story arc, and up pops shit like, “so deeeeeeeep,” “Taking me somewhere,” and “I want to experience this LIVE” – do I want to experience this live?
Glasslands is a small place, hosting a short-run open bar, and as it's already sold out it's going to be dripping with the sweat of people who comment things like, “You make me wanna do better,” and, “Reminds me of being 6 and playing Zelda!”
Price: unavailable on Craigslist, free Reyka from 9pm-10pm
Rating: 3 weed leaves

Once in a while I'll hear a teenage girl tell her friend that she'll be attending a concert that night for the band Matt & Kim, and that she's never heard them before, but she's excited.
Price: $66.75 (no surcharges on Ticketmaster anymore!)
Rating: 1 weed leaf

RIKER’S ISLAND
Some people want to return to Zuccotti park for NYE because all the pigs will be in Times Square so Lower Manhattan won't smell like bacon (jk, it totally will) but in other parts of the country, kids are going to their local prisons to scream and shout because our penal system is a corrosive nightmare that turns people with possession charges into troubled animals, nipping at the rubber hand of life. If anyone was up to it I’d go to Riker’s – or as they say on the Q100, “The Island”. However, the only concessions in the area is a lone hot dog stand. Watch out for rubber bullets!
Price: busfare for the Q100
Rating: 1 hot dog

A bunch of hard-ass noise dudes from Long Island have a house in the Rockaways, and for NYE they’re hosting a show with DJ Dog Dick, Dariius (Daren Ho), and Angels In America, which is perfect if you’d like to get “out of the city for New Years” but often find yourself feeling the FOMO (Fear of Missing Out). Expect a bunch of weed and weird drinking (gin). Fireworks are probably permissible.
The party’s slogan? “Balls will drop.”
Price: $5
Rating: 4 weed leaves

The glitz! The glitter! The electric violin! The empty containers of Nickeloedon's Gak on the floor! All of the rooms of Public Assembly will be filled with smoke, garlin, and crazy people wearing costumes. It may not be your thing but Cheryl helps you reconsider. The theme? 2012, and Mesoamerican beauties.
Price: $20
Rating: 3 weed leaves

Avant-garde storefront in Bed-Stuy invites neighborly freaks over to drone, screech, squonk, and hee-huu into 2012. Zaimph is whacky, Raft is great, and DJ Nat Roe puts me in the mood. There might be a bar? Just in case be sure to BYOTCSS (tall can of something special).
Price: $5? Free?
Rating: 3 weed leaves

You’ll bowl, you’ll eat a burger, you’ll marvel at the sheer magnitude of the bathroom. And “blue-eyed blues” brother Deer Tick will croon you until the stroke of midnight, at which point he’ll be getting drunk and playing Bob Dylan by request.
Price: $45
Rating: 1 weed leaf