A Quick and Dirty Guide to War – The Velocet 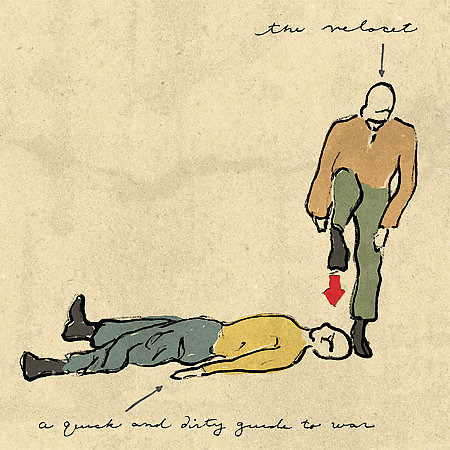 In case you haven’t noticed, there’s a war going on. Since its inception, there has been no shortage of protest songs penned by indie artists; it is noble-minded, but nonetheless a bit mind-numbing after the umpteenth anti-war anthem.

The Velocet’s A Quick and Dirty Guide to War, with its disturbing yet fascinating artwork depicting combat stances and methods to kill a man, isn’t actually about the ongoing war or its politics, but about the personal struggles and disillusionment of Michael Davidson. It’s not the first time that a musician has used war metaphors to parallel the struggles in their own life, but it’s likely that most of them have never held a firearm. Davidson, the lead singer, guitarist and principle driving force behind the band, grew up as an army brat, and served in the marines after college. His disappointments with these experiences, as well as the time he spent in New York afterwards, form the basis to the album.

The Velocet is rounded out by musicians with impressive resumes: guitarist Kris Ricat was trained at Juilliard, drummer Joe Propatier toured with Damon Albarn, and bassist Aron Watman played with Brian Jonestown Massacre. Together, they create solid instrumentals to the post-punk alternative-rock songs, and I imagine that they would be a treat to see live. However, on a recorded album, their accomplished experiences are quashed by monotonous production. A Quick and Dirty War occasionally hints at their potential.

The album begins encouragingly enough with the energetic, swaggering “Chinatown”, punctuated by Davidson’s melancholic words, “I’m not hurt, I’m hurtling home insane.” Shifting the focus from New York to the armed forces, “O’ Concertina”, underlined by an engaging hook, is a forlorn ode to the barbed wires that fenced in Davidson’s childhood homes. “Alone in Cologne” continues Davidson’s fondness for punning near-rhymes, as well as his penchant for stringing together anthemic choruses. However, at this point, the album begins to falter and limp. After a while, one song bleeds into another, and they become an indistinguishable collective of background stereo music.

The Velocet already possesses the key ingredients in a great band. A Quick and Dirty Guide to War has plenty of heart, and there’s certainly no shortage of talent. Now all they need is something to bring it all together.