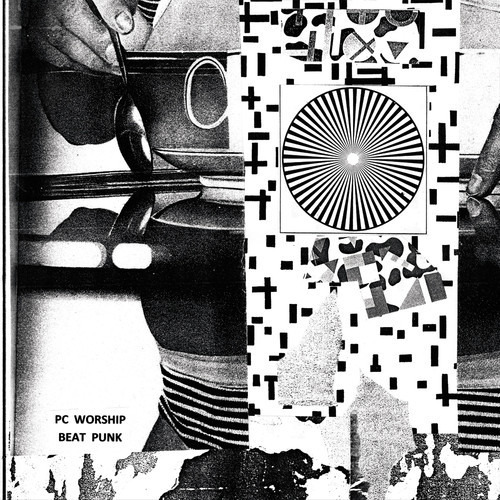 Led by Justin Frye, PC Worship crafts sound-collages so evocative that with a few locked grooves and loftier ambitions, the peripheral noise could infiltrate experimental academia. But, the serpentine song-structures and inventive rhythms give each track a pulse. Sure, blood flow is constricted and a syringe rests nearby, but insistent beats raise PC Worship from druggy experimentalists to innovative NYC noise rock titans.

Beneath the serrating fuzz and industrial clamor on any given track, a simple groove creates foundation. On many tracks (notably “Born In My Shell” early on,) there’s no discernable order to the extraneous chaos. The vocals spew one phrase after another, repeating similar imagery without adhering to a prescribed structure, but PC Worship illuminates a pathway through the muddle with a cyclical beat. PC Worship’s songs are smeared and murky like the faded stains and detritus littering the sidewalk, but their rhythms are signposts for the listeners. Maybe a gutter troll appears to provide cryptic directions occasionally, but travelers won’t be lost in PC Worship’s myriad mess.

“It’s My Name” appropriates the unnerving zips and whirs of a television powering down as if encasing a year’s worth of viewing in a sole song to highlight the psychic damage of casual entertainment. Above the perfectly appealing chord progression of “Back in Time,” PC Worship adds trumpet squawl and pitch bending. Following a damaged outro, industrial thuds descend and a sole guitar note bends out of tune throughout “Like a Sponge.” It’s seemingly sequenced to illustrate that “Back in Time” is the closest semblance of catchiness PC Worship intends to deploy on Beat Punk.

On “Witness,” a guitar is whacked out of tune and strummed frantically while a gang yells and motors fire through the audio filter of your worst trip. Children chant and things explode. In less than a minute, the track is fucking done. The implications we can project are limitless. Perhaps PC Worship meant to insinuate how pathetic it is to fool with guitars with so little time left. Maybe PC Worship just thinks nine song albums are better than those with eight. It’s up for interpretation, but the group’s skill with audio collages (what’s called “sound art” in the high-brow rags, natch) is undeniable. The evocative spectrum, the termination of a segment at the right moment – PC Worship intuits the just how much noise, sonic appropriation and experimentation to indulge, then curtail and return to the grooves grounding Beat Punk’s rock songs.

When the traditional conventions of no wave, industrial, noise rock and post-punk are so thoroughly engrained in the psyche of groups like PC worship, to specify particular influences is to make arbitrary observations. The most significant effect of forebears on an innovative new band is empowerment. The aforementioned genres demonstrate that any sound is viable in a rock context, but PC Worship isn’t content to emulate yesterday’s pioneers, Beat Punk aspires to the next step in the lineage of rock experimentalism.