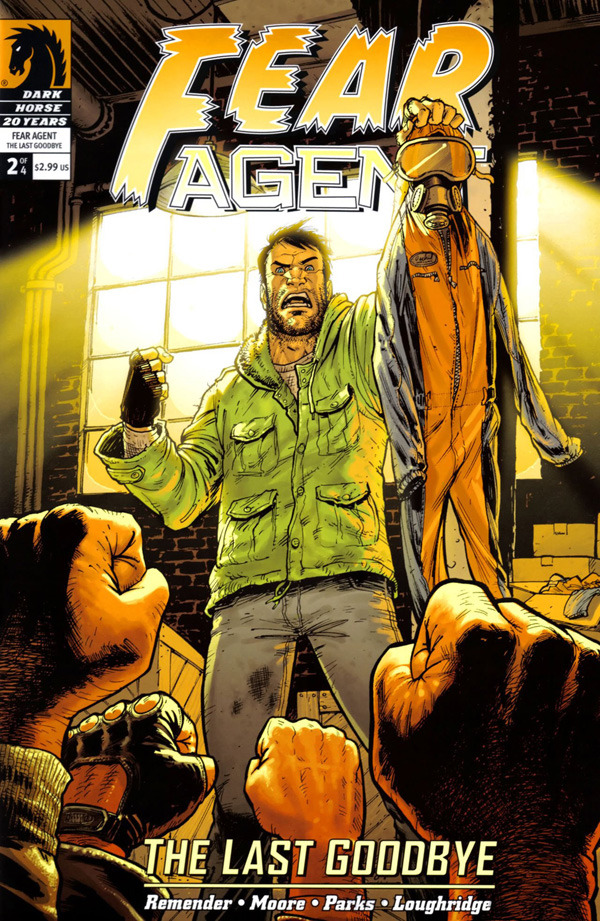 Fear Agent: The Last Goodbye continues the origin story of the book’s intrepid alcoholic hero Heath Huston, this time landing on earth, (Texas, to be more precise), during the chaos of a mass alien invasion that breaks into full-scale war. It’s a grisly story that sometimes jaunts through a Walking Dead scenario, and at other times mimics the twisted spiritual quest of Preacher. In this particular issue, we’re dropped into an alien-provoked nuclear winter, with Huston struggling against impossible forces instead of waiting to die.

Fear Agent was a good book on Image, and I would definitely recommend picking those issues up in trade. There are really not many books that capture the adventure, humor, and seediness of our classic sci fi notions of space as that incarnation of Fear Agent does. It was like an entire series of Han Solo in Mos Eisley Cantina, shooting first… every time. It was one of the best books Image has put out in the last couple of years, and catching up on that run will only enhance your enjoyment of The Last Goodbye.

More so, if Fear Agent on Image scored a 9.5 out of ten, Fear Agent on Dark Horse is an 11. None of the book’s good aspects are lost, though this time around they’re chucked as hard and fast as a Nolan Ryan fastball (circa 1974). This is The Shootist meets Mars Attacks! with just the right mix of Barfly flown in for the art house’s benefit. While Remender has several fish in the water right now, Fear Agent: Last Goodbye is unquestionably his biggest catch.

And to say nothing of dear Tony Moore. After you see Moore’s drawings for Fear Agent, it’s hard to imagine anyone else’s renderings of post-apocalyptic, alien-invasion America. His pitch-perfect depiction of the degradation of Heath Huston’s life never misses a dramatic beat. That, and he draws some of the most wacky aliens out there. His monsters are hilarious in their rendering and terrifying in the carnage they unleash.

In many ways, this series is a great starting and ending point for the whole series. If you’ve never read Fear Agent, this is a place to start. If you have followed the series, the experience will be enriched by the plentiful dramatic irony and the fill-in job it does for gaps in the original. Either way, an extremely high-quality release on Dark Horse.