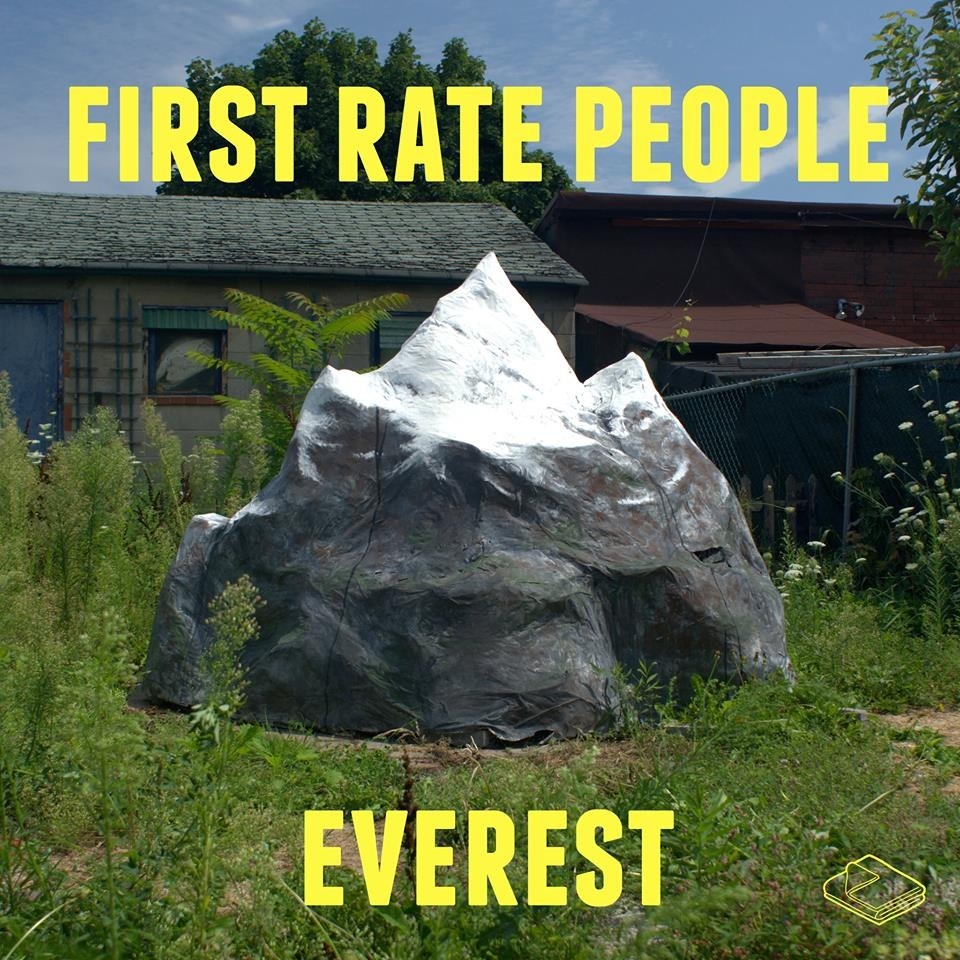 First Rate People aren't the first artists in their 20s to reflect on the alternating wasteland-like and manna-filled years of post-adolescence. This developmental epoch is rich with meaning and contradiction, like the band's debut LP, Everest. It's true, someone will break your heart. Friends will die. You will likely fall in love, maybe more than once. You will be shit broke and make more money than you ever thought possible. You will pursue your art and be punished for it. You will understand Everest as a record about climbing up if not out of the mores and moors of a generation directed, a generation adrift, a generation that for this moment sounds like this.

The band opens the record with age-polemic, “Dark Age”, a song about getting older and the crushing forces of maturation. Drawing the lens wide, Jon Lawless sings, “At the beginning of time, at the start of our lives, we were moody and hopeful and green”, an implication that the path to adulthood lies fraught with regression and cynicism. His response: “I'm digging the claws in the feeling”, casts youth as a last resort – synthesizer stabs menacing beneath his vocal. This generation is fucked maybe, as Lawless sums up all his big ideas as “writing a note on my phone to remind you tomorrow/new keys for a new cage.” Serving as both opening track and thesis statement, Everest explores these notions of youth in decline and the rough avenues that lie in the direction of figuring it all out.

Consider the dual love-song mediation of “The Sweet Hereafter” and “Three Ordinary Words”. Other people will hurt you. Relationships won't work out, or maybe they will. You will feel feelings. “You're empty inside” sings Liam Sanagan on “The Sweet Hereafter”, a yelping and instantly memorable bit of genre-bending pop before handing the track to Mary Cassidy's electric feminism. Cassidy's vocals overpower a group of laser synths, “Would you cook for me?/ Would you comfort me/ if I put your ass on a flight for free/ with the money I got for school?” Sanagan sounds swayed as the song rips into the bridge, “Sunrise can be avoided when I'm up all night working on something for you.” Cassidy singing, “put your ass on a flight for free” emerges as one of the great moments of the record, youth thrashing their way toward love, the grand crooked path toward something that you feel like keeping, flights of uncertainty, school money misused on a long distance romance. The adjacent “Three Ordinary Words” represents the comedown both in tempo and function, teasing out the essential fears of love, the most dangerous three words in the English language. It's a pop song of which the Postal Service could be suitably proud, a snapping little hook and an outtro as close to the pathological excellence of Give Up as anything in the last decade. A heartbreaking mediation, Lawless sings, “there are so many ways to get by/ and I'm by your street and it's raining.”

First Rate People suggest you are alone and together, likely screwed up and saved in the same moments. The glittery synths and horn punches of “Janna” finds Lawless lost again, brittle in singing, “I can't see you in the dark.” The group vocal hook, one of the best on the record, “We all laughed when you brought it up”, reflects the sort of group-think collective judgement and support system dilemmas of the post-adolescent years. Is this the cost of being in a music collective or the mere price of getting older? Your friends will judge you; your friends will hold you up like invisible wires; you will hurt them and they will help you; you will help them back. On “Loose Cannon”, the record's yelping center-piece and its most upbeat track, Sanagan asks, “How long it takes to be young/ to get what we deserve?”, suggesting an elusive payoff at the end of these questions.

These uncertainties hold the power to unwire us. But on the snapping “St. Lawrence” the band sings, “If I can't see you in focus/ a blurry you will do,” intimating that the mess of these years might be acceptable if only for its non-negotiability. There is no other way to grow up than to grow up. Album closer, “Roman Candles,” with its evocative Kerouac-inspired title and winsome melody, isolates this to a micro-vignette, a memory of a car rolling down your street. It is a freeze-frame that everyone has from high school, a car full of friends, or someone you liked or loved coming to pick you up. The night ahead held, at once, endless possibility and terrible disappointment. “You had the nicest car,” Lawless sings before absolute vision Anna Horvath later clarifies and adds, “You had the nicest voice.” It represents one of the sweetest moments on the record, a heartbreaking and lost youth. There was no other way but this. The song's chorus, the last assessment of the cacophony of youth, the noise and silence of being young, the band sings together, “I don't get it, but I get it.” For a complex collective of artists making their first foray as a full-length record, reflecting on their own best and worst years, growing older illustrates our most difficult contradiction. You will feel, and you might not get it, but neither do we, and yet we do.