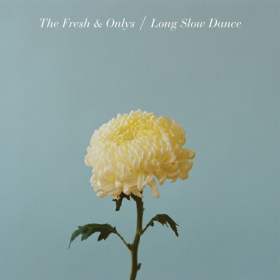 It is an untold relief when things are exactly what they seem. Perhaps, this feeling owes something to our cultural fixation with irony and misdirection. Perhaps, after wriggling away from anything looking remotely definitive for the last four-or-so decades, we've gone fully, culturally adrift, our salvation becoming any metaphorical ship's smoke on the horizon. See, even slippery, universal-ish ideologies grow tired under such a heavy workload, or, put another way: post-modernism can be a real bitch sometimes.

And so, the Fresh & Onlys, who purport a sort of outsider pop-brut in their very name, return with their fourth LP in as many years, Long Slow Dance. The record contains little slow dancing material – we presume this is one of the figurative metaphors allowed here – as the band takes their early-career notions of garage pop and turns them toward the beach, a sort of organic sliding toward surf rock that explains any number of the artistic choices on Long Slow Dance, which, in another mild irony clocks in just over 35-minutes. But these are the only cracks in what is, largely, an earnest foundation of winsome guitars, Morrisey-inspired minor key resolutions and refrains dripping in sentiment and self-pity, sunny music for sad afternoons and vice versa. It is relentlessly forthright. It is exactly what you think it might be.

Consider, when it comes to honesty, the album's two opening tracks, “20 Days and 20 Nights” and “Yes Or No?”. “20 Days and 20 Nights” begins with the title lyric and is ostensibly about muddling through something morose for just under three weeks. You might have guessed the last part. The Fresh & Only are certainly not kidding in the chorus when lead singer Tim Cohen moans over and over, “And I cry, and I cry,” as ebullient guitars and warm synthesizers happily prowl over his intentionally affected baritone. This is the grand tradition of happy sounding music about completely miserable shit. But, they know it and so do we. On “Yes Or No?,” another song with its title and chorus as one in the same, the band meanders through fire and water metaphors with lyrics like, “When we lived in the fire/you said you wanted water/and so I gave you water/you threw it in the fire.” It's better than it sounds transcribed, a song about not wanting what you have and wanting what you can't have, a literal, walking, talking pop music trope, a fact, I suspect, of which the Fresh & Onlys are well aware. We are all in on the joke here, so much so that there is no joke; it just is what it says it is like some sort of grand musical tautology. It is worth noting here that Long Slow Dance will find release on Mexican Summer, a label with a name that sounds about as much like the music they release as any company besides Universal Republic or Sub Pop.

These are the considerable successes of Long Slow Dance, the creation of a coherent, if sort of limited, world in total. It is full of fake death and tidy, little hooks. On “Dream Girls,” there isn't any doubt that the protagonist won't be walking home with the Prom Queen, a lilting and again affecting chorus, “But you'll never hang onto a dream girl.” The heartbreak inside the happy song becomes a sort of familiar tug, one you see coming and relish for its reliability if not its ingeniousness, like gravity or the days getting shorter or the way she brushes her hair from her forehead. In the world of the the Fresh & Onlys syrupy guitars and crushing lyrics concern the latter. Growing more and more pseudo-fatal as the album unfolds, the band promises to dance to fire alarms and fire squads on the record's chunkiest and best song, “Fire Alarm” (this title, at this point, might have been predictable) before unpacking the implications of more metaphorical death on “Executioner's Song.” She, the one playing the “Executioner's Song” on her drums, the one who caused “20 Days and 20 Nights” of misery or the “Dream Girl” who reappears on the reverb-heavy, garage anthem “Euphoria,” she is beautiful and terrible. It is an old story. You knew this and they knew this. They wrote a whole record about it.