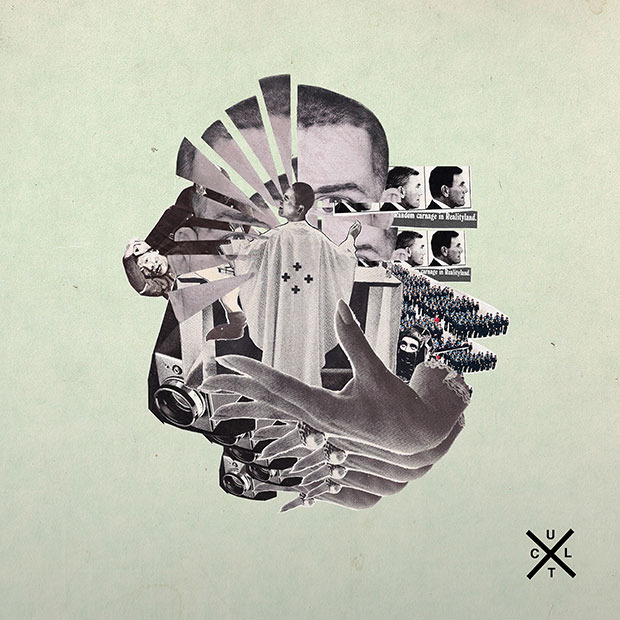 Few bands can burn through a crowd quite like Ex-Cult. At this year’s SXSW, the Memphis five-piece decimated east Austin venue Hotel Vegas, transforming a divey backroom bar into a bonafide sinkhole of sweaty, mosh pit mayhem. Delivering searing, hardcore influenced post-punk in a style that’s both volatile and fun, Ex-Cult have carved a niche for themselves when it comes to unruly, totally riveting live shows.

It’s often difficult for bands that play with such intensity to transfer this same energy to the studio. Luckily, this wasn’t the case with Ex-Cult’s 2012 self-titled debut, a thoroughly underrated collection of tight, trashing punk songs. With commentary on topics like youth, opportunity, and anxiety, each track was a worthy single in itself. Two years later, the band’s next recorded outing is Midnight Passenger, and it’s a durable follow-up. While perhaps less extreme and immediate than Ex-Cult, this latest release is far more adventurous and expansive; it just requires a bit more patience.

Midnight Passenger opens with the feral scratch of “Shattered Circle,” a trashy garage banger that introduces Ex-Cult’s new, slightly more polished approach: guitars zoom around at twice their normal speed, bass lines are firmly grounded with newly added weight, and singer Chris Shaw’s caustic, barely intelligible vocals are more aggressive than ever. “I’m a voice from the sewer/ I’m the suicide cruiser,” he snarls along the album’s title track, adopting a persona that’s not quite a villain, but most definitely no hero. Distant and mysterious, Shaw never breaks character while narrating the album’s twisted journey.

Faster, grittier cuts like “Ties You Up” seem most like the Ex-Cult of yore, but most of Midnight Passenger sees the band taking longer strides. Collaborator Ty Segall’s influence is felt throughout, particularly on tracks like “Catholic Entries,” a dark, echoing hallway of dissonant sounds and buried vocals. If not for Shaw’s signature shouts and guttural grunts, “Sid Visions” wouldn’t feel out of place on a Thee Oh Sees record. Often, Ex-Cult contradict themselves, usually in the best way possible; “Flickering Eyes” is fast, dynamic, and filled with tension, but on “Confusion Hill” the band take a minute to stretch their muscles, bobbing expertly between layers of fuzz in creating an instrumental slow burn.

It’s a story old as time; you grow up, you shape up, and little by little, that seemingly unstoppable fire begins to fade. But is that always a bad thing? Instead of baring their teeth at us, Ex-Cult have tamed their inner beast on Midnight Passenger, but the results are just as thrilling.