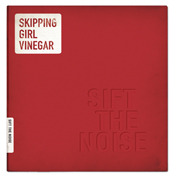 Skipping Girl Vinegar is a Melbourne, Australia quartet that hovers somewhere close to the sun on their best work, but is equally capable of getting lost in the deep-space recesses of their collective musical mind whenever they lose their directional heading.

They've been laboring in the outback for some time, as Sift the Noise was recorded over a period of three years from 2005-08, and through the various machinations of the wheel of life it is now seeing the light of day in the world outside of Oz. The band calls it “music from cold places,” whatever that means, but their music is actually warm and human, in a unique meta-pop sort of way, sporting some fairly graceful pop-rock songwriting tropes.

Milky, organic, fluid, but crystalline and shiny, with somber vocals and understated psychedelics, “One Chance” is 2:10 of absolute aural bliss, a raging Godzilla of an opener. After that, the band sounds emboldened enough to wander more placid territory, and “Fighting With Gravity” is sober and modest while “Here Come The Lies” features some gently-picked acoustic guitar and 70s-era soft rock-style vocals, as if to suggest they don’t have to try hard to be heard. The effect is moving, but a few passages wind up falling kind of flat as they wander off course. It takes time for SGV to find their footing on Sift, but that doesn’t mean it’s musically lightweight.

You could liken some of this to Anders Parker’s solo work. On “Drove for Miles” they evoke some Matt Pond PA, for good measure, but the song is all theirs. Yes, a few of my friends will label this “mature” and “adult,” but those aren’t necessarily bad words in and of themselves, only when uttered by parents and Republicans. It’s all about the context, and SGV exist in a context that is all their own. They’ve been recognized by the government and the arts community in Australia as being worthy of support and were assisted in this endeavor by The Australian Council for the Arts and Arts Victoria.

Not that this somehow magically enhances the band's work, but that’s what advanced, “progressive” societies do: support the arts. As many people wiser than this writer have noted, the quality of life in a society is in direct proportion to the degree of support given to the arts, and much of that ideal comes to fruition in Sift.